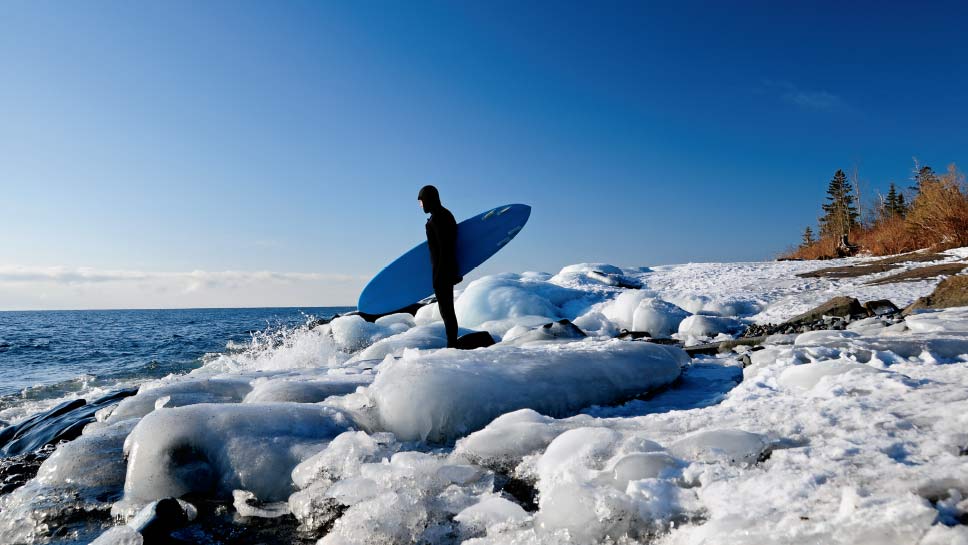 It’s a weekday afternoon in early December and Jim Mallardo is standing on the shores of Lake Michigan, armored in a 6mm wetsuit with gloves. The sky and water are a distressed blue-gray, like the contours of a contusion, and the 47-degree weather is not doing any favors for what little of his skin is exposed to the elements.

Despite these conditions, Mallardo, 47, spends the next hour and a half braving the cold and surfing on his 12-foot YOLO stand-up paddle (SUP) board—the same one he used when he first learned to surf on the South Side in his mid-thirties. He needs to report to his job at Asylum Skate Park in Lake Bluff later in the afternoon, but—as any serious surfer will attest—his plans are at the mercy of Mother Nature.

“If you see waves, you drop whatever you’re doing,” he says.

Here in the Midwest, ‘tis the season for saying, “Surf’s up.” Throughout fall and winter, hearty adventurers in and around the North Shore journey the 150-mile stretch from Chicago to Sheboygan in hopes of catching waves.

It’s said that SoCal surf culture trickled its way inland during the 1960s, but finding anyone to bear witness to those midcentury heydays isn’t an easy task. Ralph Ruffolo, 68, can personally trace it as far back as 1981, when he opened Southport Bikes and Boards in Kenosha, Wisconsin. The business, which he still operates today, started as a windsurfing equipment shop that served customers from as far south as Chicago. As the sport’s popularity declined over the years, a small (but steadily growing) group of surfers took advantage of the empty waters.

And in case you’re wondering, the brutal weather does not provide a thrill or adrenaline rush—rather, it’s a bitter pill that comes with the territory.

“It’s all a function of the weather patterns,” says Ruffolo. “Right now, north winds bring waves to our side of the lake. We don’t get the same swell in the summertime.”

Mallardo says his preferred surfing conditions are when there’s unadulterated sunshine or during snowfall—a gray day like today is mediocre at best. The lowest temperature he’s personally endured is 32 degrees, which provides him with a window of a few hours before it’s time to tap out. “When it’s real cold, things get kind of slippery, so I tend to wait in the water with my board upside down, otherwise the surface will freeze up.”

Paul Geiger lives on the North Shore and has been surfing for eight years. A native of Hilo, Hawaii, the 52-year-old attorney admits that he was originally turned off to the idea. “My brother and I were competitive surfers,” he says. “My parents wouldn’t let me go to school on the West Coast because they knew I would never go to class, so I landed at Loyola Lake Shore. I tried surfing here in the ’80s, but coming from Hawaii, it just wasn’t that interesting.”

Despite his initial lack of the enthusiasm, he couldn’t get away from his roots. At his home in the Chicago suburbs, a Hawaiian flag beckons from the front of a sprawling, sun-drenched ranch. A vast collection of surf and SUP boards hang from the ceilings of various rooms. The place drips with Aloha vibes. And when the forecast is right, Geiger packs his gear into a 2016 Ford Transit 350—its rear windows plastered with stickers—and heads for the nearest beach.

Geiger runs with a diverse crew of locals, including a teacher at Lake Forest High School and a former fire chief from Northbrook—all bound by a shared love of the sport. Some days they’ll surf at Greenwood Beach in Evanston; other days involve a two-hour trek to Sheboygan. Together, they’re a far cry from the stereotypical gang of delinquent beach bums, and for good reason: surfing the lake is not a cheap or casual endeavor.

“You need the equipment to get started,” says Geiger. It requires wetsuits, other cold weather gear, and different boards for different weather conditions. When surfing locally, Geiger often substitutes the boards of his youth for a larger SUP board.

“The waves are typically smaller and weaker here because it’s fresh water,” he explains. “There’s a lot less buoyancy. You don’t have waves coming from deep water and hitting a shallow reef, so they’re not that powerful. Surfing big boards with flotation and stability gives you an advantage.”

Mallardo concurs. On this winter day in Kenosha, the waves aren’t very big. He laments that the rising water levels have made conditions unpredictable over the last two years. But he’s been able to ride two barrels in the past, and every once in a while, he’ll see regular sets comes in with 5- or 6-foot waves.

For better or worse, he’s not the only one who takes notice.

“I’ve seen more of an interest in surfing in the six years that I’ve been here,” he says. “Where I used to be maybe one of two or three people on the water, you’ll now get upward of 20 on a single day.” Mallardo would know, given the number of hours he’s logged on the beach. This summer, he’ll operate SUP Kenosha, a paddle board rental business that will offer a limited number of beginner surf lessons.

“Most people don’t want to see their personal surf spots get blown up,” he admits. But he remembers that he, too, had to start somewhere, and doesn’t particularly enjoy the thought of being territorial about something he genuinely loves.

True, Lake Michigan will never be Maui, but it’s not trying to be. Midwest surfing is its own animal, and if you ask Mallardo, he’ll half-joke that it comes with benefits you won’t find elsewhere:

“At least you’ll never have to deal with sharks or other dangerous stuff in the water.”