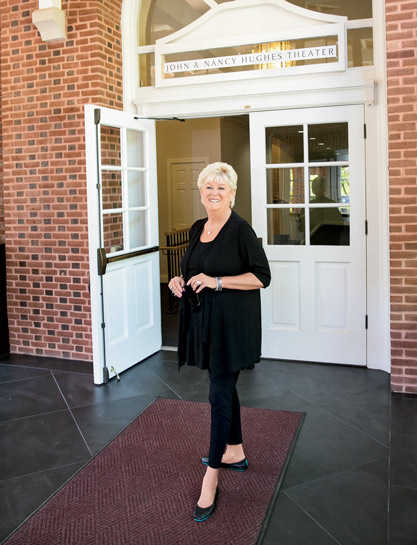 “Nancy Hughes was an enthusiastic and kind woman who deeply loved her family and community. Her contributions to Lake Forest—the hospital—Gorton Community Center, Deerpath Golf Course, and most recently, the Hughes Gateway at the beach—were foundational, leading to significant participation by many of her fellow residents, and improving the city in a permanent way,” says Lake Forest Mayor George Pandaleon. “Nancy exemplified the love of Lake Forest and its spirit of philanthropy that we all share. She will be greatly missed.”

Born in Chicago on April 22, 1951, Nancy was a resident of Northbrook in her youth, where she met fellow Glenbrook North High School student John Wilden Hughes Jr. in 1967. Three years later, they were married—Nancy at 19, John at 20. After they both worked a series of odd jobs, John found success in Chicago advertising before transitioning into screenwriting. With such films as The Breakfast Club, Home Alone, and Ferris Bueller’s Day Off, John became a filmmaking icon and brought Nancy along with him.

In 1988, he released the semi-autobiographical She’s Having a Baby, for which the final credit reads “Inspiration: Nancy Hughes.” Though firmly set in the North Shore, the script was written in the Brentwood neighborhood of Los Angeles, where the Hughes family lived from 1984 to 1988.

The film’s emotional climax revolves around a harrowing but ultimately healthy birth at Evanston Hospital, the same building where both of Nancy’s sons, John III and James, were born. Set to Kate Bush’s hit song “This Woman’s Work,” a track personally commissioned by John, the sequence exemplifies a moment where music tells a story that images alone can’t adequately express.

Nancy and John lived all over the North Shore, and the country, but Lake Forest held a special place in their hearts. When John died unexpectedly in 2009, Nancy began to honor his legacy through philanthropy, with significant contributions to our city.

“Lake Forest is a great community to raise children and living here has been one of the happier times in our lives,” she told Forest & Bluff at the opening of the John & Nancy Hughes Theater at Gorton Community Center, which was made possible by a $2 million lead gift toward its renovation that she made in 2014. “When we found our Lake Forest home, there was no question that we wanted to live here. This is where we lived the longest. There is no other place that compares to Lake Forest.”

That same year, she also donated the 11,233-square-foot Lake Forest home she had shared with John as a charitable gift in the development of Northwestern Memorial Lake Forest Hospital’s new hospital building. “John loved the beauty of Lake Forest; I love Lake Forest,” she said. “So when the opportunity to help advance the hospital presented itself, it was an easy decision to make.”

Amy Wagliardo, current executive director Gorton Community Center, echoed that gratitude. “None of what we’re doing now would have been possible without her,” she says. “I cherish her kind words of encouragement and will miss seeing her pop in for a film screening. We will always remember her.”

“Mrs. Hughes’ contributions to Lake Forest knew no bounds,” adds Matt Barba, general manager of the Deer Path Inn in Lake Forest. “We had the privilege of getting to know Mrs. Hughes during her visits. We will always remember her gracious presence, her kindness to the staff, and her disdain for the martini glass.”

Her most recent philanthropic projects included the John & Nancy Hughes Clubhouse at the Deerpath Golf Course, which was made possible by a December 2017 donation of $500,000. And then, on September 14, the day before she passed, Lake Forest residents gathered for the dedication of the Hughes Gateway at Forest Park Beach, rebuilt with Nancy’s assistance after flooding destroyed the previous entrance.

The site is just blocks from the Westminster Road home she donated to the Lake Forest hospital where she died—the home where her family had lived from 1988 to 2009, and where John wrote Home Alone. As stated in the obituary released by the family to our publication, “In death, the couple is united once again.”