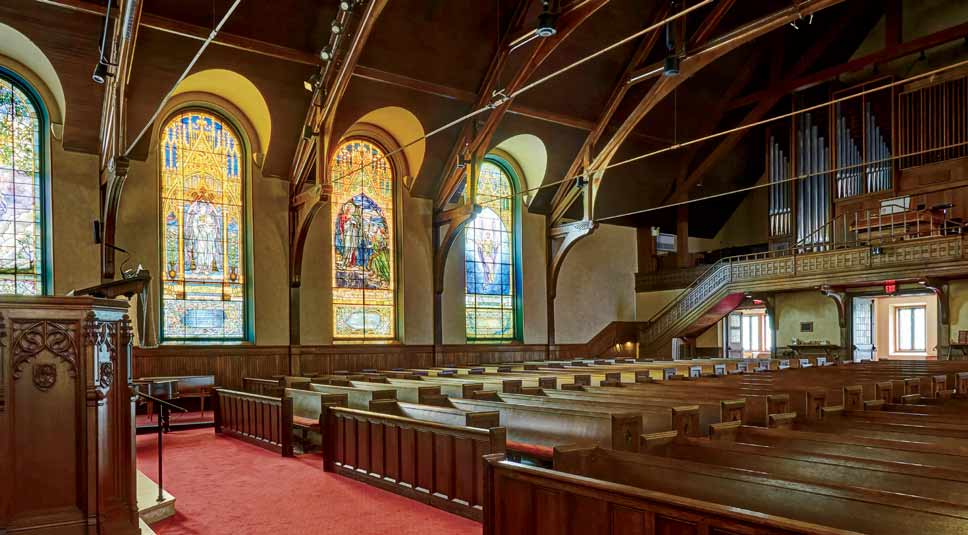 First Presbyterian Church of Lake Forest was founded more than 150 years ago. The original shingle style church was built in 1887.

Those who know their Lake Forest history understand that the city as we know it would not have existed without a group of Presbyterians who chose to build a community here in the “forest by the lake” in the mid-19th century.

The little worship group they founded at Deerpath and Sheridan roads in 1859 was instrumental to the visions they had for a place where citizens could live, worship, educate young people, and prosper. And while there have been many changes at First Presbyterian Church of Lake Forest in the decades since architect Charles Sumner Frost completed the shingle style church in 1887, those values still hold true today. 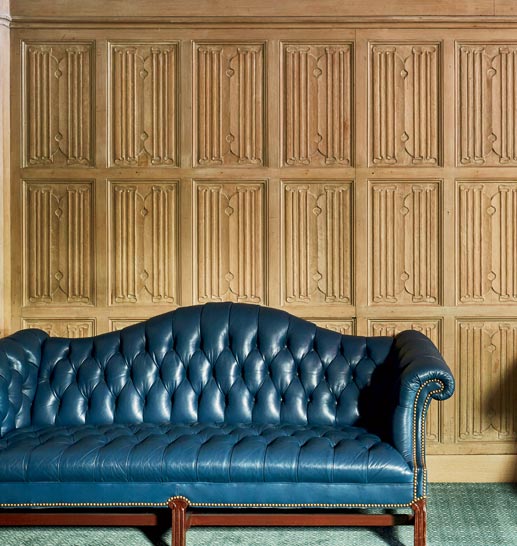 Hand-carved linenfold wood carvings from the original choir room were preserved and showcased as part of the recent renovation at First Presbyterian Church of Lake Forest.

However, with changing times and changing needs, a similarly visionary committee set out on a mission to renovate and revive several of the church’s meeting spaces and facilities so they would continue to endure not only into the 21st century but for generations to come. And it was through this decade-long research and planning process with Melichar Architects of Lake Forest that  the committee was able to realize their vision.

Prior to the most recent renovations, visitors were often lost in the building, and it appeared unwelcoming and uninviting to newcomers. In 2009, a church committee tapped Melichar Architects to create a master visioning plan for their entire campus.

“Like a sea shell that collects barnacles, the original building underwent seven extensive additions and renovations between 1907 and 2006 to grow its original size,” explains Diana Melichar, president of Melichar Architects. “The original fellowship space that hugged the sanctuary soon became enclosed by surrounding rooms, and eventually fellowship became relegated to a 1960s basement, multipurpose room at quite a distance from the sanctuary. These construction changes resulted in a labyrinth of dark public corridors.”

Through extensive research, Melichar Architects unraveled the chronology of the myriad past building projects and specifically identified how the church could reclaim a gathering space in the heart of their original building.

“We took great pains to make the fellowship architecture and  its iconography flow seamlessly with the sanctuary. We had to be very, very sensitive to the original “feel” of the place so church goers would feel comfortable,” says Melichar, a church member who also sings in the choir.

Lake Forest interior designer Tina Dann-Fenwick was introduced to First Presbyterian Church of Lake Forest in 2018 as she won the bid to take on the finishes and furnishings portion of the project.

“It has been the culmination of many years of planning to fulfill the church’s dream to create a whole new gathering space for its community,” explains Dann-Fenwick. “The church has been at the heart of Lake Forest since before the Chicago fire and has gone through many transitions. For such a historic building with its wonderful Tiffany windows, creating the new space to make it appeal to more modern tastes while staying true to its roots was the project of a lifetime.”

Working with Melichar Architects and Altounian Construction Inc., Dann-Fenwick says it was one of the most rewarding collaborations of her career. Melichar agrees, explaining how the design, architecture, and construction dream team that was assembled took on the Herculean task of ushering a 130-year-old church into 2019.

Dann-Fenwick says a key interior design element was the carpet that flowed from one space to the other in a way that didn’t feel disruptive.

“The carpet was also the most important thing from a timing point of view. We had to finalize the design, choose the colors, and place the order by early December to make sure it could get shipped before the Chinese New Year to meet our deadline to have everything finished by Easter,” adds Dann Fenwick. “Everyone worked so well together. I was surprised that the committee was so easy to work with and how they embraced my design decisions.” 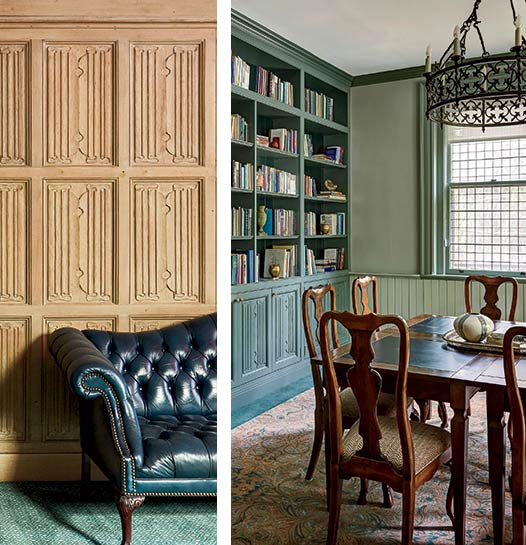 Linenfold panels were integrated into the cabinetry in the Deerpath Room to tie the design back to the church’s history.

Janet Gibson, a member of the church’s renovation committee who participated in the project from the beginning, says watching the vision for the new sanctuary, parlor, music room, and great room become a reality was magical. “I’ve been told it’s the nicest space in any church people have seen,” she says. “I feel proud to have led the team in making it just that.”

Dann-Fenwick and Melichar echo those sentiments, saying that being able to make a difference for this historic church community was very fulfilling.

“As a designer, that’s why I do what I do,” adds Dann-Fenwick. “What I enjoy most is the end result—to have someone say that you’ve changed their life in some way.”

Regular members of First Presbyterian Church of Lake Forest have been enjoying the new spaces since they were unveiled after the Easter service. But if you haven’t been to the church lately or are considering attending for the upcoming Christmas holiday season, here are some of the things to look for in the spectacular transformation:

SYMBOLS: Dann-Fenwick mentioned the importance of the carpet but that was about more than making sure it flowed from room to room. The new carpet also includes some of the symbols displayed in the sanctuary, including the Scottish thistle (which represents the passion of Christ) and a quatrefoil, with four flower lobes representing Matthew, Mark, Luke, and John. 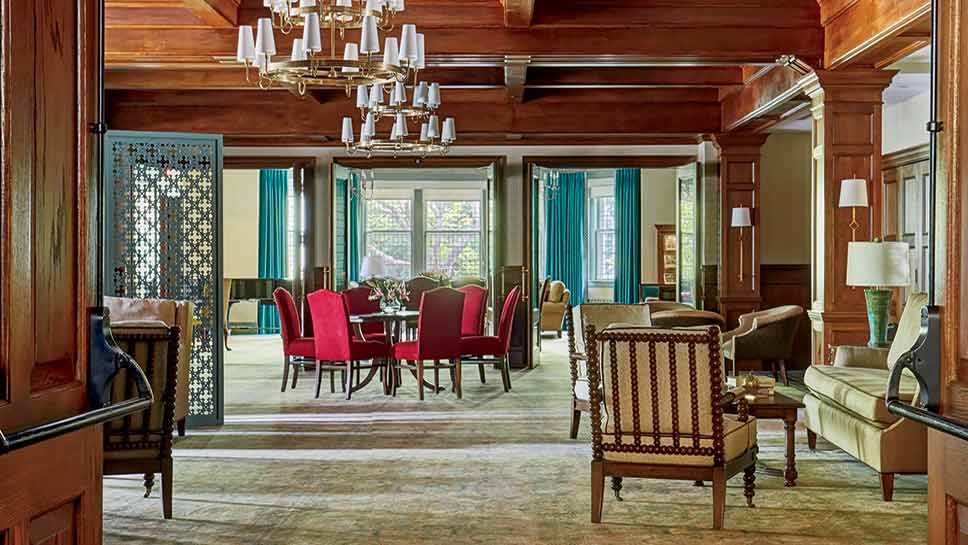 A screen wall salvaged during the renovation holds a prominent place in the design. PHOTOGRAPHY BY MIKE KASKEL

LOST TREASURE: Melichar says one of the greatest features of the new design was the repurposing of a screen wall from a 1930s renovation. “It was unappreciated and buried in the old choir room,” she explains. “We displayed its beauty in a refreshed coat room area, and also incorporated original linenfold panels into the Deerpath Room library cabinetry for that tie to the building’s history.” As Gibson explains, linenfold is a simple style of relief wood carving originally from Flanders. Extremely popular in 18th and 19th century Europe, the wood is thought to resemble the pages of the open Bible.