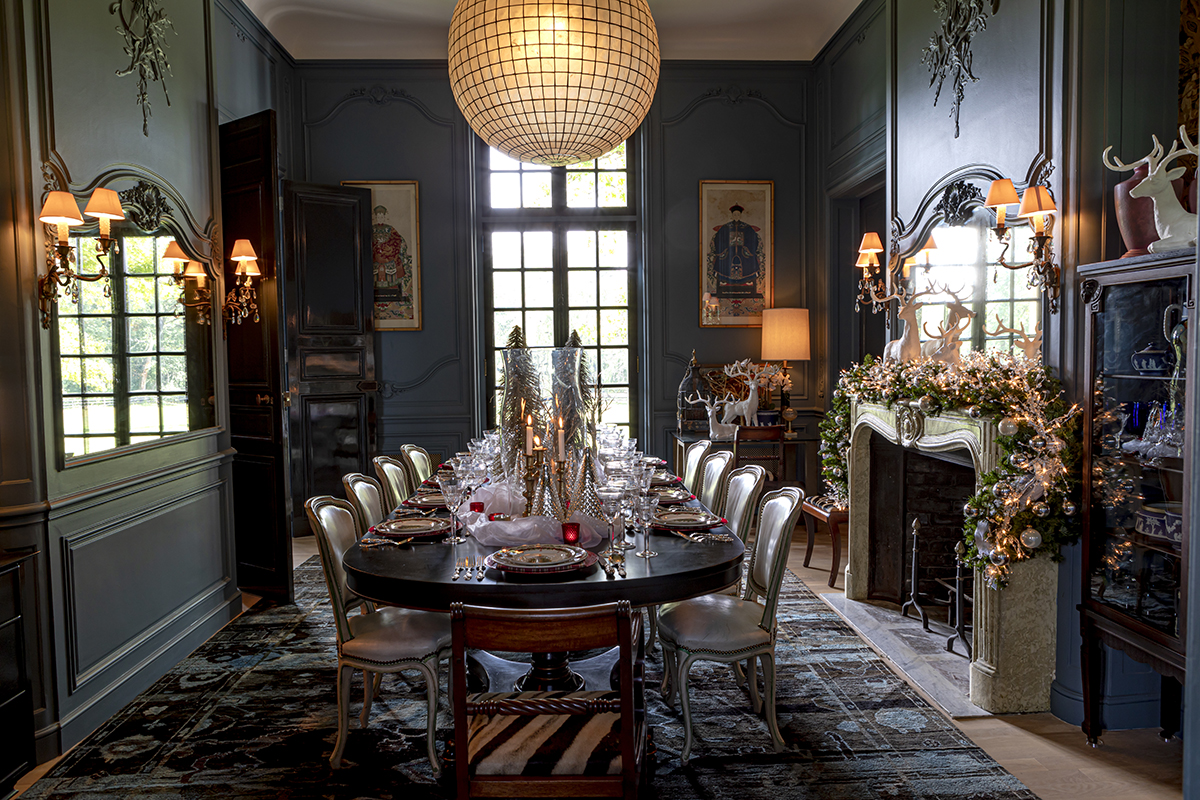 Lake Forest’s Trent Wisehart has been restoring this David Adler mansion in Lake Bluff for the last four years. All dressed up for the season, it is one of four homes to be featured on Lake Bluff History Museum’s Christmas Home Tour on December 8. PHOTOGRAPHY BY MONICA KASS ROGERS

It all started with a 19th century barber pole. Trent Wisehart, executive vice president of global creative services for Tommy Hilfiger, was 13, shopping at an antique mall with his parents, when he spotted it.

“I just had to have that barber pole,” says Wisehart. “My parents were big antique buffs, so they understood my excitement. But it was very expensive, my first antique collectible. Dad worked out an arrangement with the owner so that I could pay in installments. I worked all summer to pay for it.” 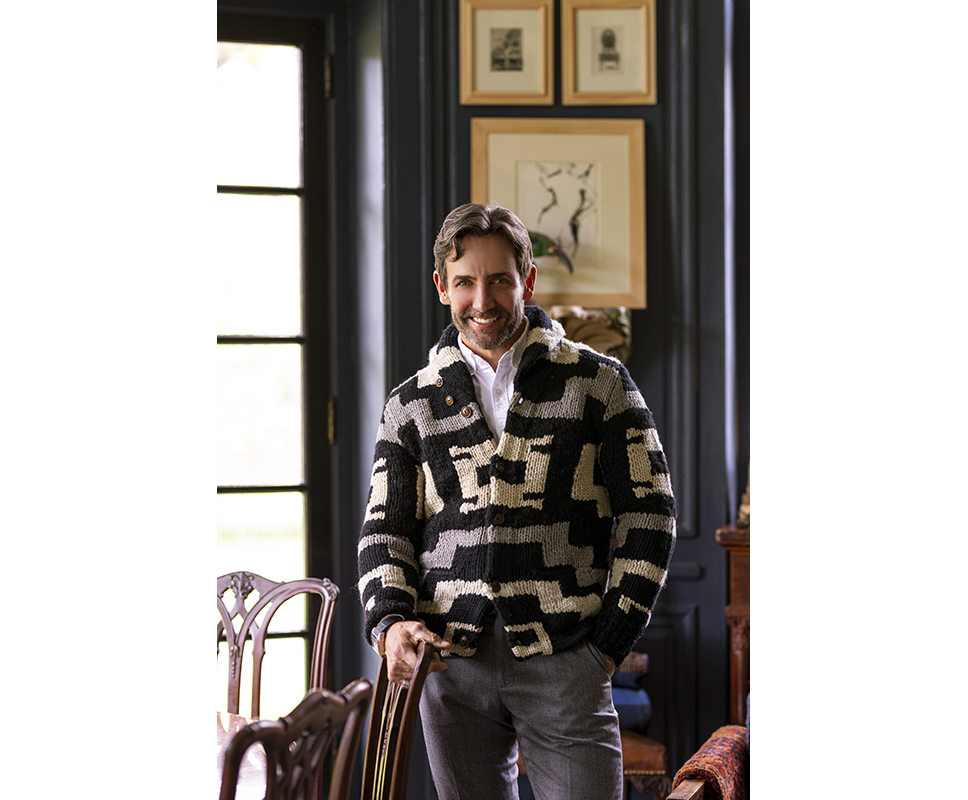 At home with Trent Wisehart. PHOTOGRAPHY BY MONICA KASS ROGERS

The barber pole stayed with Trent as he moved around the country, progressing up the career ladder in the world of design. It came along to the 1898 Dutch colonial Wisehart bought and renovated in South Orange, N.J., when he was only 26—the same year he started working for Tommy Hilfiger.

It went with him to the 1896 colonial revival house he renovated next door to the first home. And it came with him to the exquisite David Adler French country estate he has been restoring for the last four years in Lake Bluff.

“I have an obsession with bringing historic homes back from the brink of disaster,” Wisehart says, smiling. “And I’ve always had a knack for product curation and visual displays that go into my work, and into these homes. I’m a firm believer in buying things that you love—objects and art that speak to you—and mixing them together in the way that you like to see them. Because that’s what makes you you.”

The candy-striped pole that epitomizes all of this for Wisehart isn’t on public display. But during Lake Bluff History Museum’s (LBHM) Christmas Home Tour of Wisehart’s home on Sunday, December 8, there will be plenty of red and white in the holiday decorations. 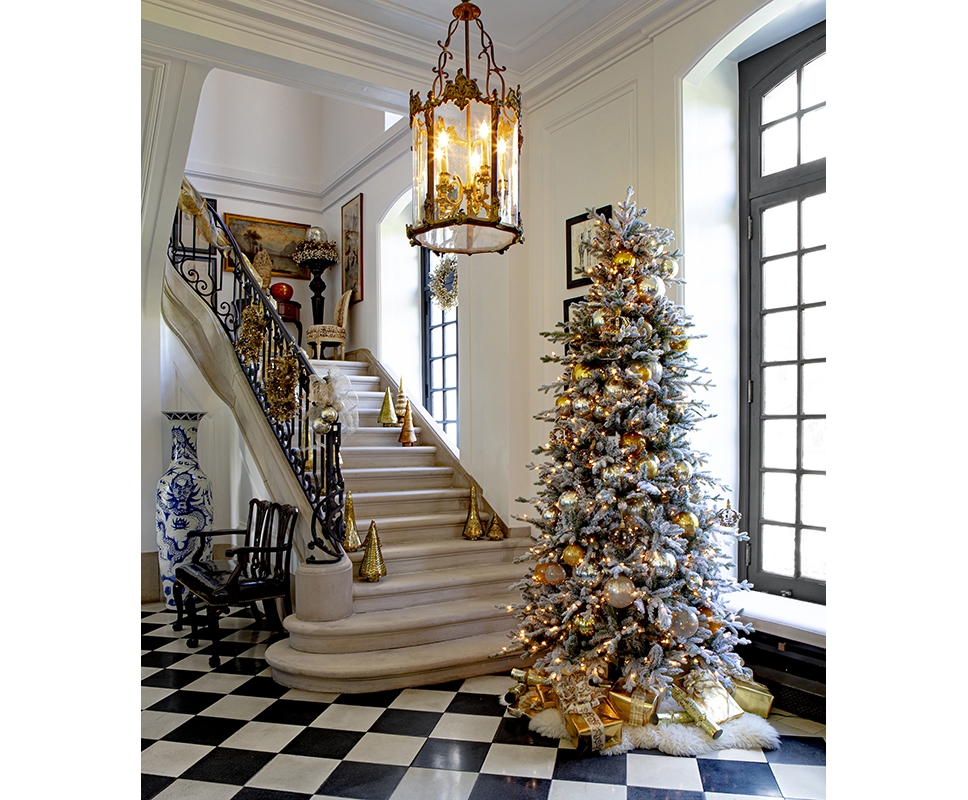 Wisehart’s estate was the first important residential commission for David Adler and his partner Henry Dangler after they left the offices of Lake Forest architect Howard Van Doren Shaw. Commissioned by Ralph H. Poole in 1911 and completed in 1914, the estate was styled after French chateaus of the Loire valley. PHOTOGRAPHY BY MONICA KASS ROGERS

Visitors will have the chance to view Wisehart’s beautifully restored estate, filled with a time-and-genre blurring  assemblage of art, furniture, and objects. And the tour will include three more architecturally-significant Lake Bluff homes decked out in equally fine flourish.

Like the classic holiday ballet, The Nutcracker, which transports viewers through a sequence of fantasy worlds, homes in in this year’s tour take visitors all over the architectural map.

Wisehart’s estate was the first important residential commission for David Adler and his partner Henry Dangler after they left the offices of Lake Forest architect Howard Van Doren Shaw. Commissioned by Ralph H. Poole in 1911 and completed in 1914, the estate was styled after French chateaus of the Loire valley. It includes a grand foyer with sweeping curved staircase, and rooms laid out in enfilade fashion, allowing a clear view of the interior expanse from one end of the house to the other. Originally set on 46 acres and including a farm with barns, horse stables, kennels for 40 hunting dogs, greenhouses, and guesthouses, the estate also had formal gardens designed by the Olmstead brothers. 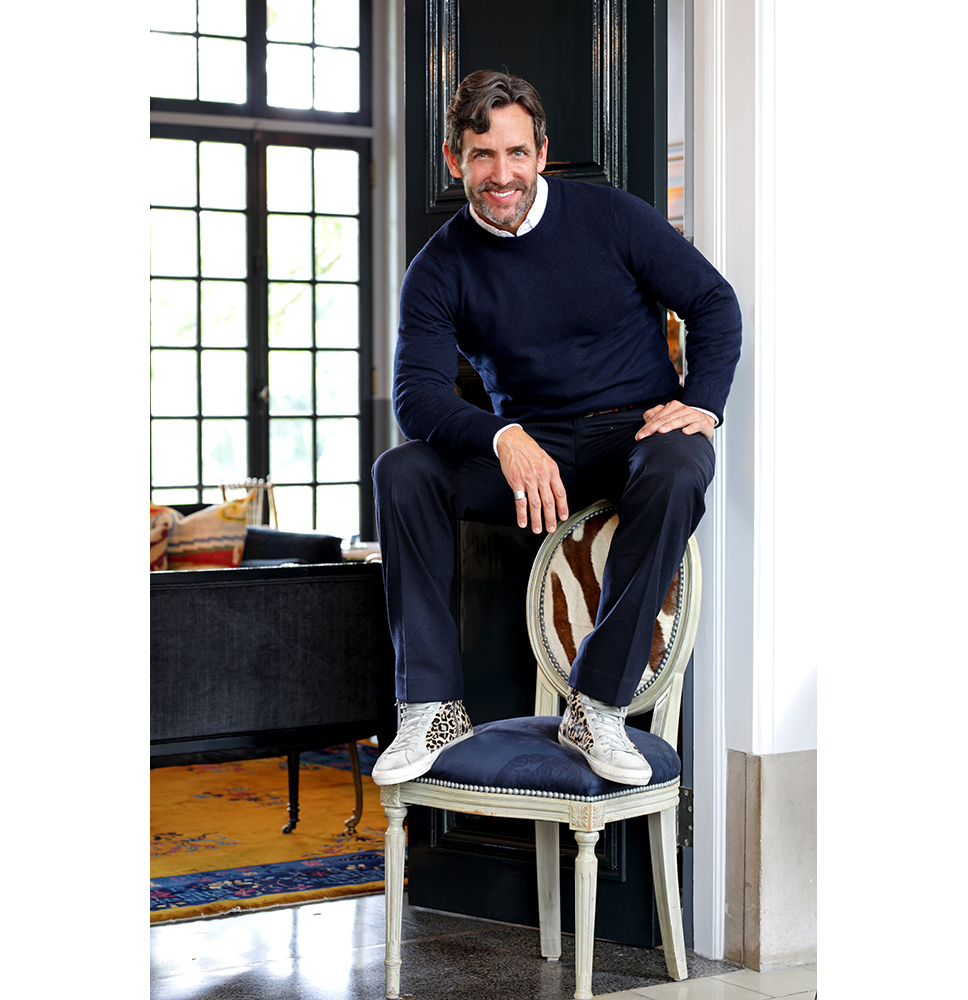 “I have an obsession with bringing historic homes back from the brink of disaster. And I’ve always had a knack for product curation and visual displays that go into my work, and into these homes. I’m a firm believer in buying things that you love—objects and art that speak to you—and mixing them together in the way that you like to see them. Because that’s what makes you you.” –Trent Wisehart, executive vice president of global creative services for Tommy Hilfiger. PHOTOGRAPHY BY MONICA KASS ROGERS

Also in this year’s tour is a 1905 Queen Anne with all the charm of a wrap-around porch, original oak paneling, cut-glass  windows, and crown molding. This home was commissioned by John Murdock, a major player in the vaudeville circuit who went on to found RKO Pictures Corp., one of the big five movie studios during Hollywood’s Golden Age.

There is also the 1925 stone gatehouse architect Harrie T. Lindeberg built on the grounds of an English Tudor-style summer estate he designed in Lake Bluff. (Lindeberg is known for the Onwentsia Club he built, and several more Lake Forest homes and estates.)

And to round things out? A vintage farmhouse in a plain envelope of white board-and-batten siding opens to a completely unexpected interior of rooms that radiate from a circular, double-height atrium.

This is the 9th year LBHM has hosted its Christmas home tour, a creative endeavor. Funds raised from the tour support the museum’s efforts to digitize its entire collection and mount new exhibits every year, such as the recent “Made in Lake Bluff,” and “A Century of Weddings” exhibits, and an upcoming exhibit on Lake Bluff’s gem: “Lake Michigan.”

Over the years, homeowners who have opened their dwellings to the public for the tour have done so to support the work of the museum, to give history buffs an insider’s view of the properties, and to kick-off the holiday season in style.

“The Christmas Home Tour is our biggest fundraiser of the year and our most popular event,” says LBHM Vice President Pam Russell. “It attracts people from the North Shore, but it also brings in visitors from Chicago and Milwaukee who love coming to see the homes and experience Lake Bluff’s charm.”

According to Penny Marsh, chair of the LBHM Christmas Home Tour, designers decorating homes for the tour favor familiar holiday themes. You’ll see ornaments nestled on fresh-cut spruce, pine boughs on mantels, and Nutcracker collections on sideboards, plus plenty of Santas, snowmen, and carolers. But there is room for creative variation.

“Some homeowners display collections from their travels around the world, such as vintage glass ornaments from Germany,” says Marsh. “And one year, one of the homes featured a Christmas tree decorated with keys from the owners’ previous military accommodations.”

Others decorate with whimsical flair, using bright, primary colored ornaments on faux white trees. Marsh recalls one year when a home was completely outfitted in silver and blue, while another home followed a North Woods holiday theme.

“Visitors tell us they pick up ideas on the tour and use them to jump-start their own holiday decorating,” she says.

But the tour also gives visitors the opportunity to see interior design evolutions, renovations, and restorations in the making. Wisehart, for example, sees the tour as a chance to celebrate the fruits of the restoration labors he’e been hard at for so many years.

“I think it’s nice for everyone in the community to see what I’ve done here,” says Wisehart. “Everybody knows about the house, but they don’t quite know what’s happened inside. When I first walked into it, the previous owners had lived here with 60 cats. So I had to replace all of the floors, have the doors re-milled. I restored the old plaster work. I gutted the kitchen, all the bathrooms, and put in all the HVAC. The back staircase had to be completely blown out and recreated with the original plans. It was a huge undertaking. Endless, really. But I’m a dreamer, and from the time I first walked into the foyer, I just couldn’t resist the opportunity to restore this beautiful estate. I feel very fortunate to have a David Adler. It will be a lot of fun to share the restoration with the community.”