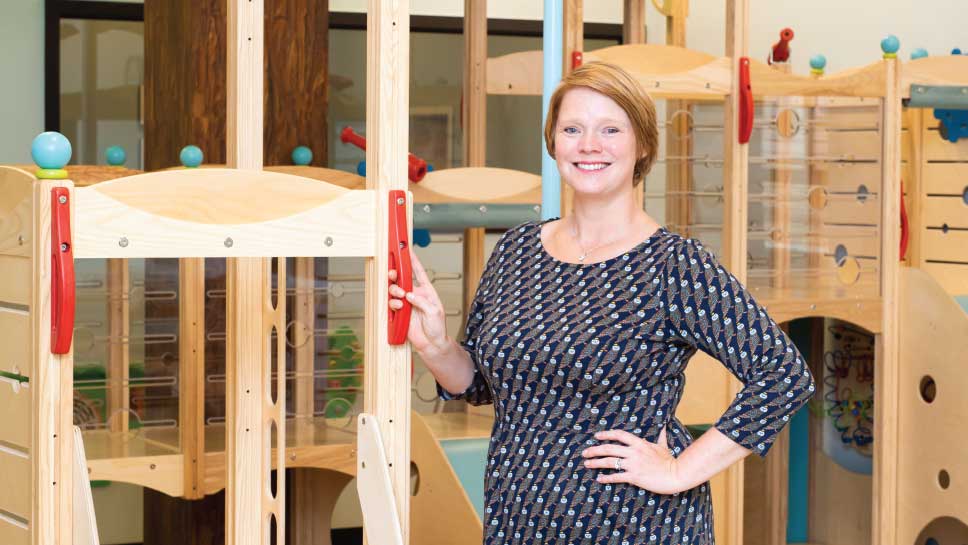 LoMastro Performing Arts Academy offers a rich array of classes and learning opportunities for kids and adults of all ages.
PHOTOGRAPHY BY ROBIN SUBAR

From a young age, Loren LoMastro Specht has possessed a love for dance.

That love is reflected in LoMastro Performing Arts Academy, which she founded in 2007. The Lake Forest-based school offers classes in dance, theater, and acro, as well as enrichment programs for children through adults.

This summer the Academy opened the Playroom at LoMastro, an indoor playground and community gathering space offering open play, enrichment classes, co-working, camps, and parties. The Playroom is designed to encourage active and imaginative play.

“A space like this was really needed in the community,” LoMastro Specht says. “When my son was about 2, I started visiting indoor play-spaces ​around the Chicagoland area. At that time, I began dreaming of opening an indoor play space close to home where parents and caregivers could play, meet new friends, and be part of a greater community.”

LoMastro Specht believes play-based learning is disappearing from schools and that today’s kids are missing out on the valuable lessons learned
through play. The Playroom at LoMastro aims to remedy that. She says, “Engaging in dramatic play such as playing market—selling fruits and vegetables—provides interactions that develop social and problem solving skills. These days, kids are more likely found sitting behind a screen.”

This summer the Playroom was thrilled to welcome Lake Forest Kindergarten teacher Sandy Albinger and Math Specialist Katie Lamberti. They agree that visiting the Playroom at LoMastro means immersing your son or daughter in the meaningful work of childhood, saying: “While joyfully engaging in all the opportunities provided in the Playroom, the children are researching, collaborating, innovating, and problem solving. The playroom is such a gift to our community.” LoMastro Specht couldn’t be more thrilled with their joint response—as well as that of the children who have spent the summer engaged in play.

Although children always come first at the Academy, LoMastro Specht acknowledges that parents need support as well. “As a parent, I know it is almost impossible to get work done while you’re caring for young children. I also know the guilt a parent feels when you have to ignore your child to focus on work sometimes. The Co-working + Enrichment option will allow parents to work on-site while their child is benefiting from enrichment programing and creative play.”

LoMastro Specht, who grew up in Wauconda, began teaching dance at the age of 16 and went on to have a nine-year professional dance career as a freelance tap and jazz dancer, including an apprenticeship with River North Dance Company.

Those early days of teaching have blossomed into an enterprise that includes a 7,200 square-foot space in the Forest Square Shopping Center with five classrooms. The facility, and a second location at the Gorton Community Center in Lake Forest, serve more than 500 children and adults per year.

In addition to traditional dance classes such as ballet, the Academy offers a variety of dance programs and classes that cover just about all the bases for kids. A common thread throughout all LoMastro programming is the adherence to a well thought out, developmentally appropriate, progressive curriculum, not offered elsewhere in the surrounding area. The Academy’s focus is on well-rounded training.

The Academy also teaches important life lessons to kids through its philanthropy. Throughout the year students learn the importance of giving back through community service and outreach. “Last year we visited and performed for two senior living facilities as well as partnered with Fill A Heart 4 Kids in an effort to support homeless children and those living in group homes,” she adds.

With all that goes on at the busy LoMastro Performing Arts Academy, it’s watching the students’ progress that gives her the most satisfaction. “To teach a student from age 2 through high school graduation, who then goes on to be a success in college and beyond” is her greatest measure of success.