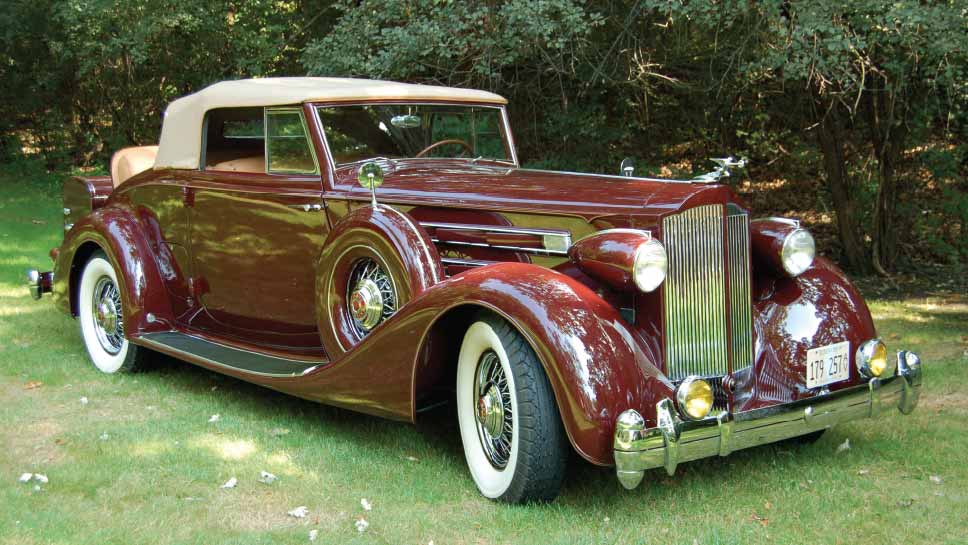 Wheels Of A Century

According to a 1961 Lake Forest history book written by Edward Arpee, Arthur Farwell (one of the J.V. Farwell boys) became the talk of the town right around 1900 by bringing the first automobile (a black Winton) to Lake Forest. Horses bucked, shied, and became unmanageable as the “new vehicle chortled and roared with the deafening sounds of a threshing machine.” The horseless carriage had arrived and life as the people of Lake Forest knew it would never be the same. On Sunday, October 13, the Lake Forest/Lake Bluff Chamber of Commerce, the City of Lake Forest, and an advisory committee of “auto enthusiasts” will pay tribute to the role motorcars have played in local culture for more than a century. Titled “Then & Now,” the show will include vintage cars that will be displayed among the most enviable modern collectibles of today. Mark Litzsinger’s 1935 deep red Packard Twelve will be there, as will Claude and Audrey Ohanesian’s Packard Super Eights (a yellow Convertible Coupe and a black foreign bodied Sedanca D’Ville). Brian and Joan Maxwell’s super sporty Jaguar XK150 is also expected, sharing Lake Forest streets with new Ferraris, Lamborghinis, and another one you won’t want to miss—Rob and Rosemary Troxel’s modified green 1941 Packard touring sedan with air conditioning (a local favorite on hot humid summer days). “The list goes on. If there is to be a celebration of a century of motorcar excellence, Lake Forest is the place to do it,” says John Maxson, who is co-chairing the advisory committee with Ed Russ. Committee members represent a variety of cars including Exotic, Classic, Pre-war Production, British, Brass, and racing cars. Held at the West Lake Forest Train Station from 1 p.m. to 4 p.m., the inaugural event will also include family activities, live music, food, and other entertainment provided by the Lake Forest Parks & Recreation Department and local businesses. Admission is free. The antique and classic car component will be non-judged, invitation only, with two awards presented: Mayor’s Cup and People’s Choice. For more information, visit lflbchamber.com. 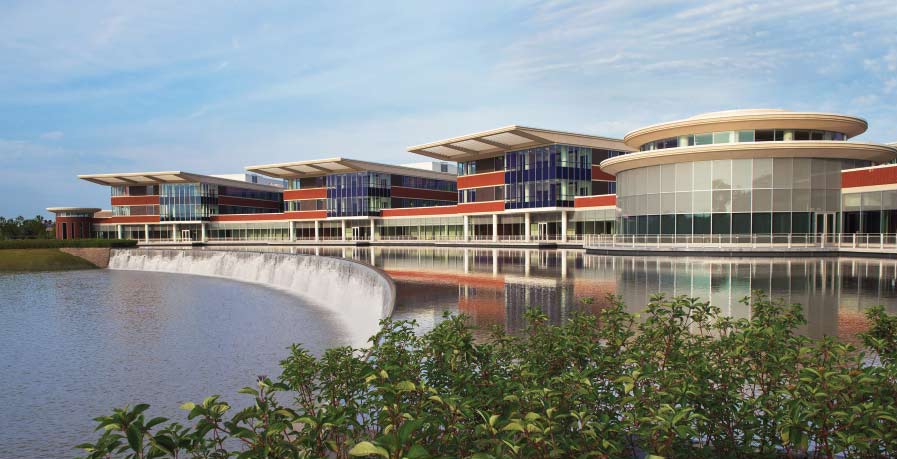 Let’s face it. Hospitals are often associated with the most emotional and difficult moments of our lives. While we rarely look forward to spending time at the hospital, it makes a world of difference going to a clean, bright, modern, comfortable, and well-resourced facility like Northwestern Medicine Lake Forest Hospital. To anyone who’s seen the newly built, LEED-certified hospital, it comes as no great surprise that it earned 10th place on Soliant’s 2019 Top 20 Most Beautiful Hospitals list. With 96 hospitals nominated and more than 8.5 million votes cast, it truly is a testament to patients’ appreciation of the hospital’s top-notch design, technology, and staff. “These facilities recognize that beauty encompasses more than just a pleasing design,” says Soliant president David Alexander. “It includes compassionate and dedicated staff partnering with comforting surroundings to help create the most optimal place for people to receive the treatment they need and to restore their health.” We totally agree.

Best in the Midwest

Travel + Leisure magazine has just confirmed what many Lake Foresters already know—our own Deer Path Inn is a fabulous place for a getaway. The quaint and cozy English-style inn was recently rated best resort hotel in the Midwest and the 66th best hotel in the world in T + L’s 2019 World’s Best Awards survey. Experience for yourself the luxury and comfort of traditional English inn keeping right here in Lake Forest, complete with newly renovated rooms. Perhaps you’d enjoy a spot of tea with some cucumber sandwiches, tarts, and scones in the afternoon followed by a scenic ride down to Lake Michigan on a complimentary bike. For dinner, you can choose between classic English fare like fish and chips and shepherd’s pie at the White Hart Pub or elevated European cuisine like Chilean sea bass and seared diver scallops at The English Room. The English Room is also home to an award-winning wine program and an impressively creative cocktail list. With its historic beauty, personalized service, modern amenities, and optimal location amid all the shopping, dining, and natural beauty, The Deer Path Inn truly has it all. thedeerpathinn.com 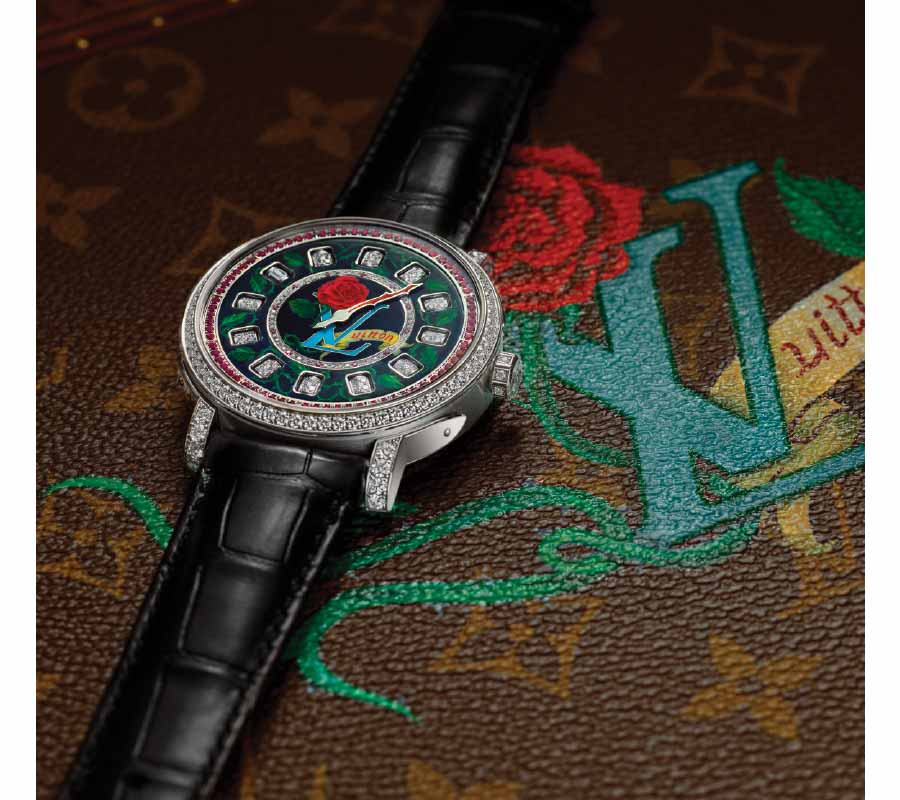 Louis Vuitton (LV) devotees may be intrigued to learn that the iconic French designer has unveiled a delectable new one-of-a-kind timepiece. This Escale Spin Time watch was created exclusively for the Only Watchan auction of exceptional watches to raise money for AMM, the Monaco-based association for research on Duchenne muscular dystrophy. For the sixth consecutive year in a row, LV artisans outdid themselves with creativity and function. Anita Porchet, one of the greatest independent enamellers in fine watchmaking, painted the white gold plaque dial by hand. Requiring 200 hours of work to create, the dial utilized Grand Feu champlevé enameling and miniature painting. To mirror the exquisite beauty of the dial, the bezel, lugs, and 41-mm diameter case crown made of titanium and white gold, are also set with white diamonds. The masterpiece is presented in a custom monogram canvas watch case (also hand-painted) recalling the floral patterns of the dial, along with four alligator straps and an 18-carat white gold buckle set with diamonds. The final auction (by Christie’s, of course) will be held at the Four Seasons in Geneva in November but the pieces will tour the world between now and then, stopping in Monaco, Dubai, Paris, London, New York, Tokyo, and Singapore. louisvuitton.com