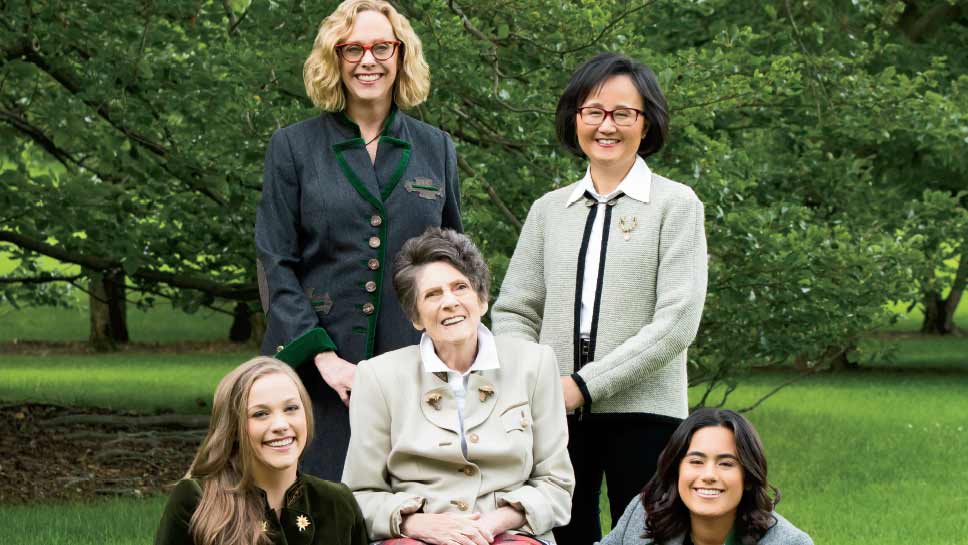 Inge Narjes Knauz and her family have been a part of Lake Forest Open Lands Association and its signature “Bagpipes & Bonfire” fundraiser for generations—a legacy that weaves together a proud family history, German culture, and a love of the natural landscape. As they prepare to serve as honorary chairs for this year’s September 29 event, we salute their story and dedication. PHOTOGRAPHY BY ROBIN SUBAR. OPENING PHOTO: Three generations of the Knauz family will bring a touch of German pride to this year’s “Bagpipes & Bonfire” fundraiser. Shown (left to right) are Katie Madden, Kim Knauz Madden, matriarch Inge Knauz, Kitty Knauz, and Julia Knauz.

When Inge Narjes was about 3 years old, she and her parents were unexpectedly summoned back to their ancestral home in north Germany, east of Cologne. There was an expansive farm there in Bockhorn, an estate of fields where flax was grown and several generations worked to support the flourishing textile enterprise.

The message was urgent. Inge’s grandfather had passed away and her father’s brother and second wife were liquidating a farm that had been in the family since the 1400s. Their presence was needed immediately.

The couple was still in the process of getting their American citizenship, having come to Chicago via Ellis Island in the early 1930s. And while Europe—and their own homeland—was quickly spiraling into war, they could not have foreseen the sudden turn of events that would happen while they were abroad.

That fateful 1941 attack on Pearl Harbor meant the U.S. would swiftly declare war on Germany—stranding Inge’s family and putting their visas and pending citizenship applications on hold. “Apparently Opa, my grandfather, was drafted as soon as the German government knew he was back in the country. There was no way for them to return then as he was then serving on the Russian front,” explains Inge’s daughter, Kim Madden of Lake Forest. “The town they eventually called home during the war was Hiddisen, which is now part of Detmold.”

After the war, when Inge was 17, her parents (Arnold and Hedwig Narjes) sent her back to the U.S. to claim her natural born citizenship and join other relatives in Kansas. The family, including two younger sisters born in Germany, would follow to build the life they always dreamed of in America—one that would lead them to Lake Forest.

As Madden explains, Inge’s family found work in Lake Forest for John Stuart. Her Opa (Arnold) became a chauffeur. “The Stuarts lived on the end of Elm Tree in Lake Forest,” she continues. “There was a little gardener’s cottage and that’s where Mom and her sisters lived.” 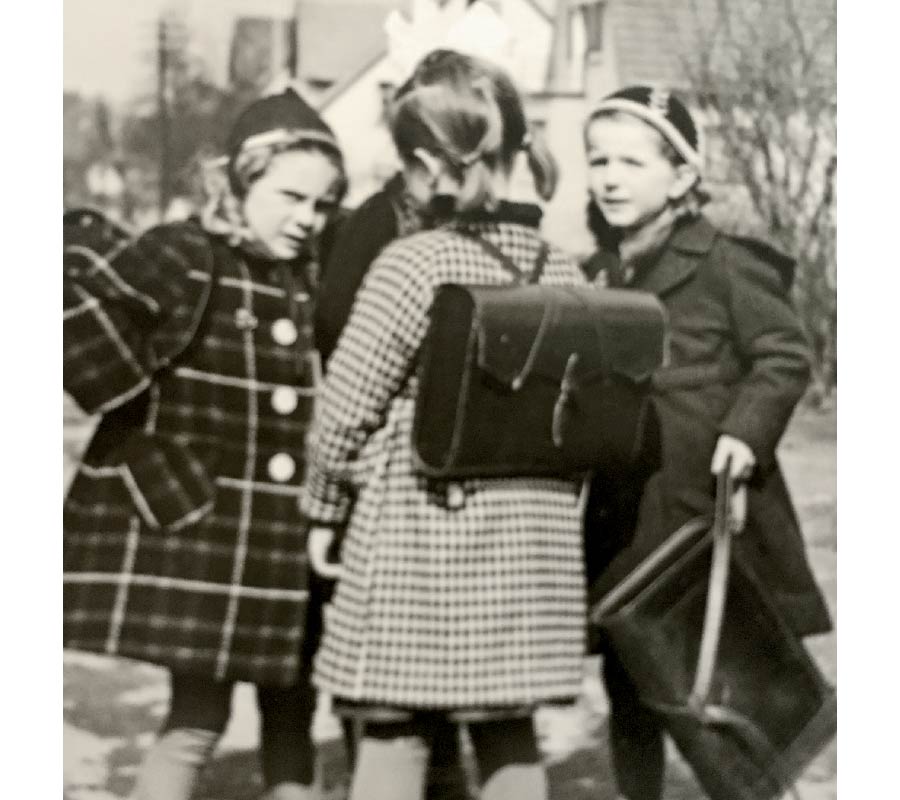 Inge Narjes Knauz is shown in the plaid coat on her first day of school in Germany. Family members say she hated that coat because it had been made out of an old blanket and was very stiff and itchy.

The plot, and the matchmaking, continued to unfold as many did in those days.

“My father’s father had been a butler and his mother had been a cook. A friend of the family decided they had to get the chauffeur’s daughter and the cook’s daughter together, and they were set up on a blind date,” says Madden, explaining how her mother Inge met Bill Knauz and married him in 1955.

Bill’s father, Karl Knauz, used his life savings of $3,000 to start Lake Forest Garage and Filling Station at Woodland Road and Western Avenue in Lake Forest in 1932, which eventually morphed into an automobile dealership after the war. “Because they knew all the chauffeurs in town, that’s where they would go to buy gas,” says Madden. “By the time Mom met Dad, the gas station had already been established as a Chrysler/Dodge dealership at the corner of Laurel and Western.”

While Inge grew up hiking the Alps in Germany, Bill Knauz grew up in a world of motorcars.

“My father was interested in anything with an engine,” Madden explains. “When he finished high school, before he went into the Army, he went overseas to follow the motorcycle racing circuit. While he was in Europe, he fell in love with the European cars. After he served in Korea, my father brought Mercedes into the family auto business.”

By then, it was 1959 and all imports had to go through a man named Max Hoffman in New York, Madden says. Inge worked at Northern Trust before they were married. 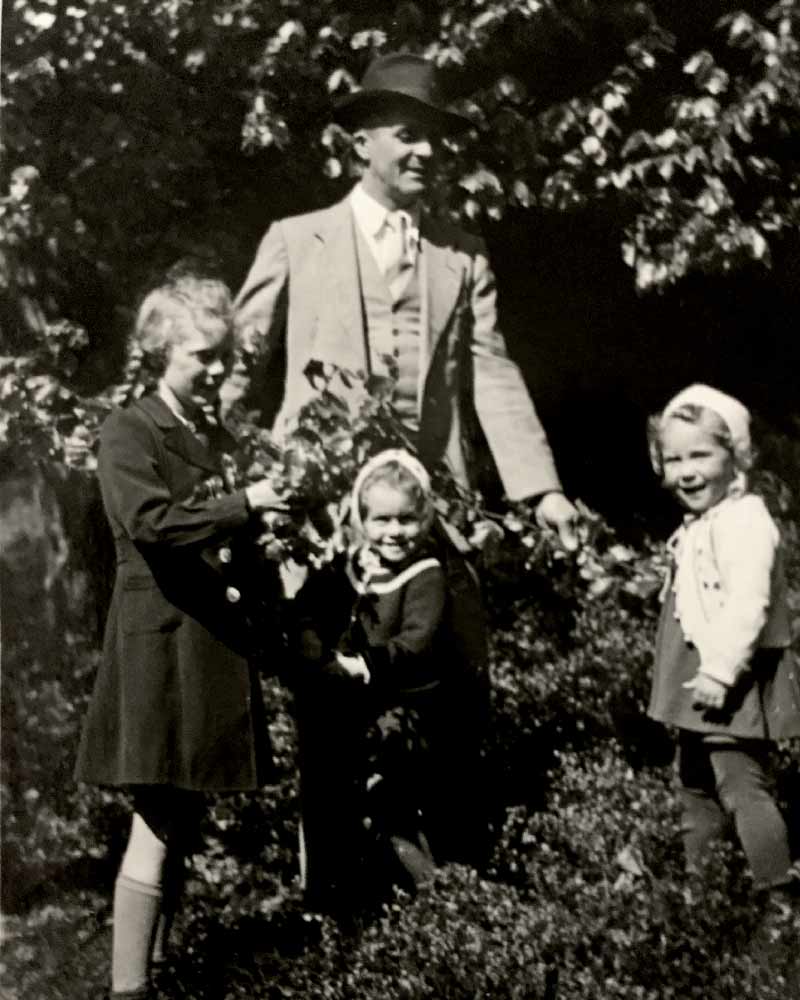 “All my father’s interests had engines … cars, automobiles, motorcycles, etc. My mother was just the opposite,” she continues. “She was all about nature and taking walks. My grandfather on my mother’s side was a great gardener. He was not only Mrs. Stuart’s chauffeur but a gardener as well. He took over when the gardener passed away.”

When the Lake Forest Open Lands Association (LFOLA) was founded in 1967, Inge Knauz was one of the first to join the mission to preserve the city’s landscapes and land trusts. She worked as a volunteer educator (also called a “vole”) for many years, joining friends Jamee Field and Sally Searle.

“At the very beginning, during those early meetings, she was there. She did not get as involved as others, but she did as much as she could,” says Madden. “She is also an avid birdwatcher. We would always go down there to identify birds. She had recordings of what the birds sounded like.”

In fact, it was Inge Knauz who is credited for identifying a very rare sedge wren on the LFOLA prairie. “Mom’s the one who heard it first,” Madden says, adding that with three bird feeders in the backyard, she and her siblings grew up learning their sounds and calls.

Today, at 85 years old, Inge Knauz prepares to attend her 32nd “Bagpipes & Bonfire,” LFOLA’s signature fundraising event. She will join 91-year-old husband Bill and the Knauz/Madden family on Sunday, September 29, as honorary chairs, a tribute to her lifetime of devotion to nature and preservation. Northern Trust, where Inge Knauz worked all those years ago, is a presenting sponsor. 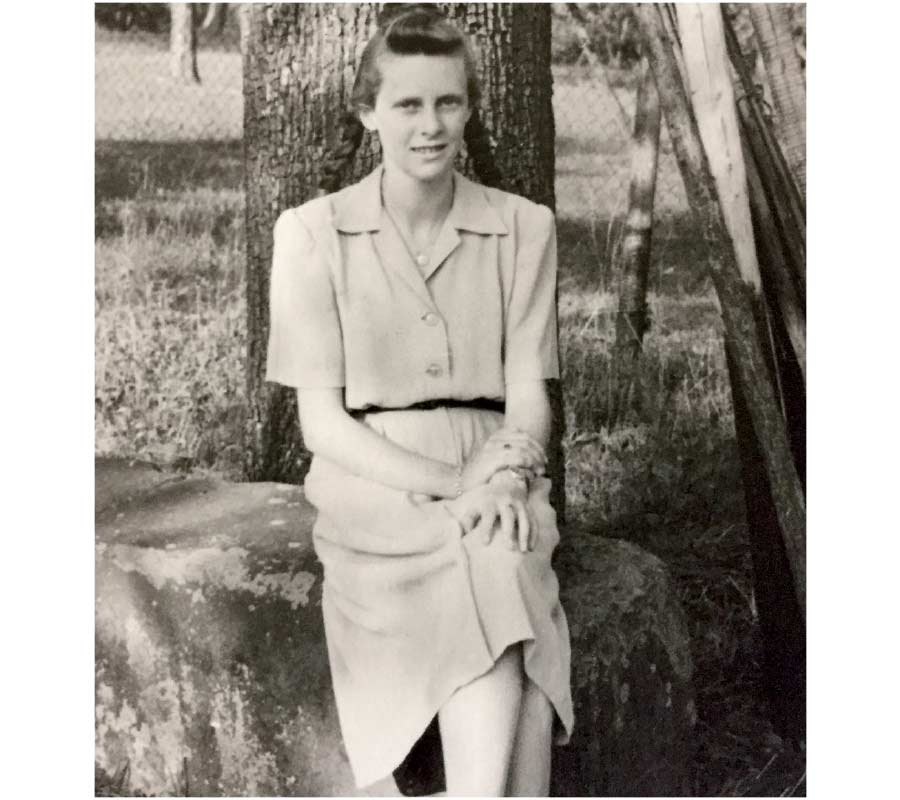 This photo of Inge Narjes Knauz was taken around the time she came back to the United States from Germany.

“Inge has never missed a single Bagpipes,” says Lake Forest Open Lands Association’s Paula Clair. “This multigenerational love for nature began in Germany with her and carried on to her children and granddaughters. Her late son, Karl, loved the outdoors and there is a bench donated in his honor in our Derwen Mawr Nature Preserve. Karl and Kim (Madden) would often camp in this area as children. Her granddaughter, Julia, was an eco-camper at LFOLA and has also never missed a Bagpipes.”

Madden echoes those stories with some of her own.

“Mom’s liking the outdoors, and the reason my brother Karl was named Karl, is that my mother’s favorite uncle was Karl who used to take her hiking in the Alps,” says Madden, clarifying that her grandfather was also Karl (Knauz). “He passed away from cancer when he was 38, but he always enjoyed doing things with Open Lands. He loved to be outdoors. When we were children, we would play in the meadow behind Ragdale. That was our playground.”

That meadow behind Ragdale is also where the original community bonfires were held. “It was a neighborhood thing,” she says. “You’d be invited to go over there and light up a fire of prairie cuttings and have cider and donuts.”

The “Bagpipes & Bonfire” event has come a long way. This year, in honor of Inge’s and the Knauz family’s German ancestry, guests will enjoy the traditional Scottish fanfare with a touch of Germany. “We’re going to try to get some German beer, and things like that,” says Madden. “But it’s such a Scottish event, we don’t want to change it too much.”

To be designated as an honorary chair is humbling for Madden and the family. She sees it as an opportunity to continue spreading the word about LFOLA and the important work it does in the Lake Forest community. “It still amazes me how many people don’t understand that Lake Forest Open Lands is not part of the city,” she says. “We’ve done things here that nobody has done across the country. I feel so privileged to be a part of it.”

Her only regret is that her brother will miss being a part of it. Though when that lone piper plays “Amazing Grace,” and calls are given to remember those no longer on this Earth, Karl Knauz will be remembered.

“He loved this. He’ll be there in spirit,” says Madden. “That’s the part of the event where I always lose it. There’s no way I can hear that song without tearing up.”

“Bagpipes & Bonfire” will be held Sunday, September 29 at the Middlefork Farm Nature Preserve. The event includes games, Scottish entertainment, a picnic feast, wine, beer, and spirits—all culminating with the landing of kilted sky divers, a dramatic bagpipes procession, and the lighting of the bonfire. For more information, call 847-234-3880 or visit lfola.org.