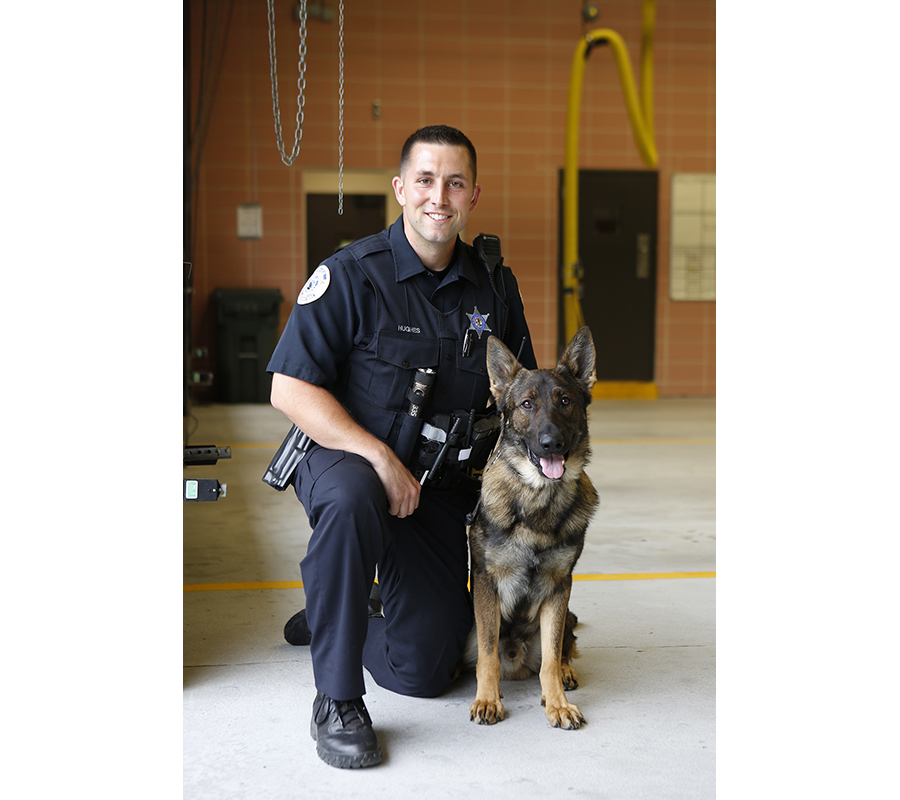 The newest member of the Lake Forest Police Department (LFPD) has big brown eyes, a winning grin, and an endearing habit of cocking his head to one side when listening intently. He’s been patrolling for less than a month, but is already an expert at tracking and searching, trained to locate missing persons and suspects who have fled crime scenes. He possesses a long list of additional skills such as narcotic detection and missing-evidence location.

And he likes to have his throat scratched.

Like LFPD’s other patrol officers, Chase and Hughes head out every day, answering calls and patrolling the streets. But the squad car in which they travel, emblazoned with a big K-9, is built with a special compartment for Chase and high-tech equipment to aid in the team’s specialized skills. And at the end of their shift, Chase and Mike head home together—on alert 24/7 should an emergency arise requiring their assistance when they are off-duty.

“There are many incidents where having a canine on the police force is extremely helpful—everything from a situation where a young child or a person with Alzheimer’s disease has wandered off and gotten lost in a wooded area or ravine to situations where a suspect has fled the scene of a crime and a large area needs to be searched,” says Deputy Chief of Police Robert Copeland. “A dog is so much quicker and more efficient at searching and tracking than a person. And the dogs that make the canine patrol cut are bred for their excellent sense of smell and ability to obey commands.” 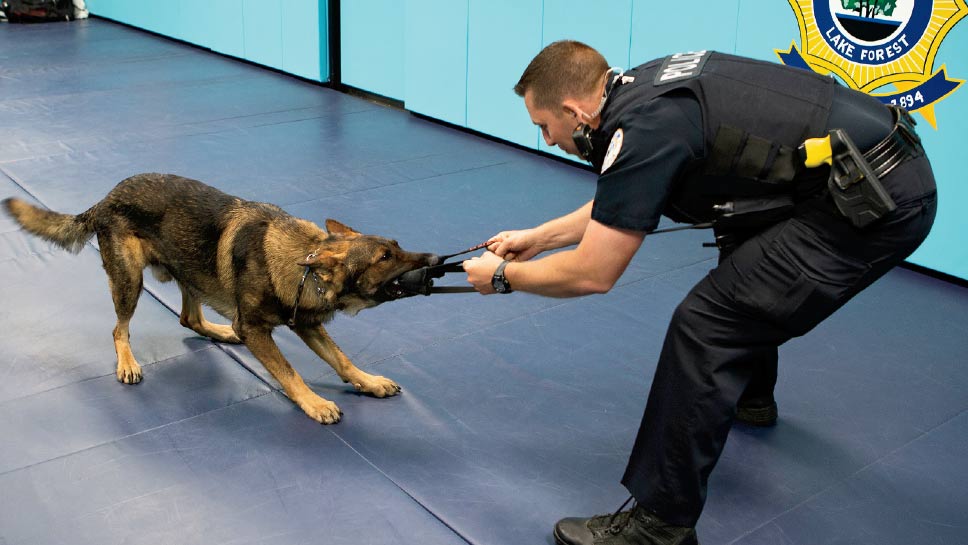 Copeland says there have been several incidents where a burglary was in progress, and when LFPD arrived at the scene of the crime, they could see where people had exited the house right after they got there.

“If we had had a canine in those moments, tracking down and apprehending the suspects could have happened much faster,” he adds.

But while the benefits to having a canine are great, the cost and commitment are also substantial. Including the dog itself, canine patrol car and equipment, initial and ongoing training for the dog and handler, plus ancillary fees, the total costs add up to $90,000.

“We thought the addition of a canine to the LFPD would be a wonderful idea,” says Steven Esposito, a founding member of the Lake Forest Police Foundation (LFPF). “There is a need in the community for the services a police dog provides. If he helps track down one criminal, or saves one child, it will be well worth it. We could not have added Chase to the department without the generous support of the Lake Forest community to help us fund this mission.” 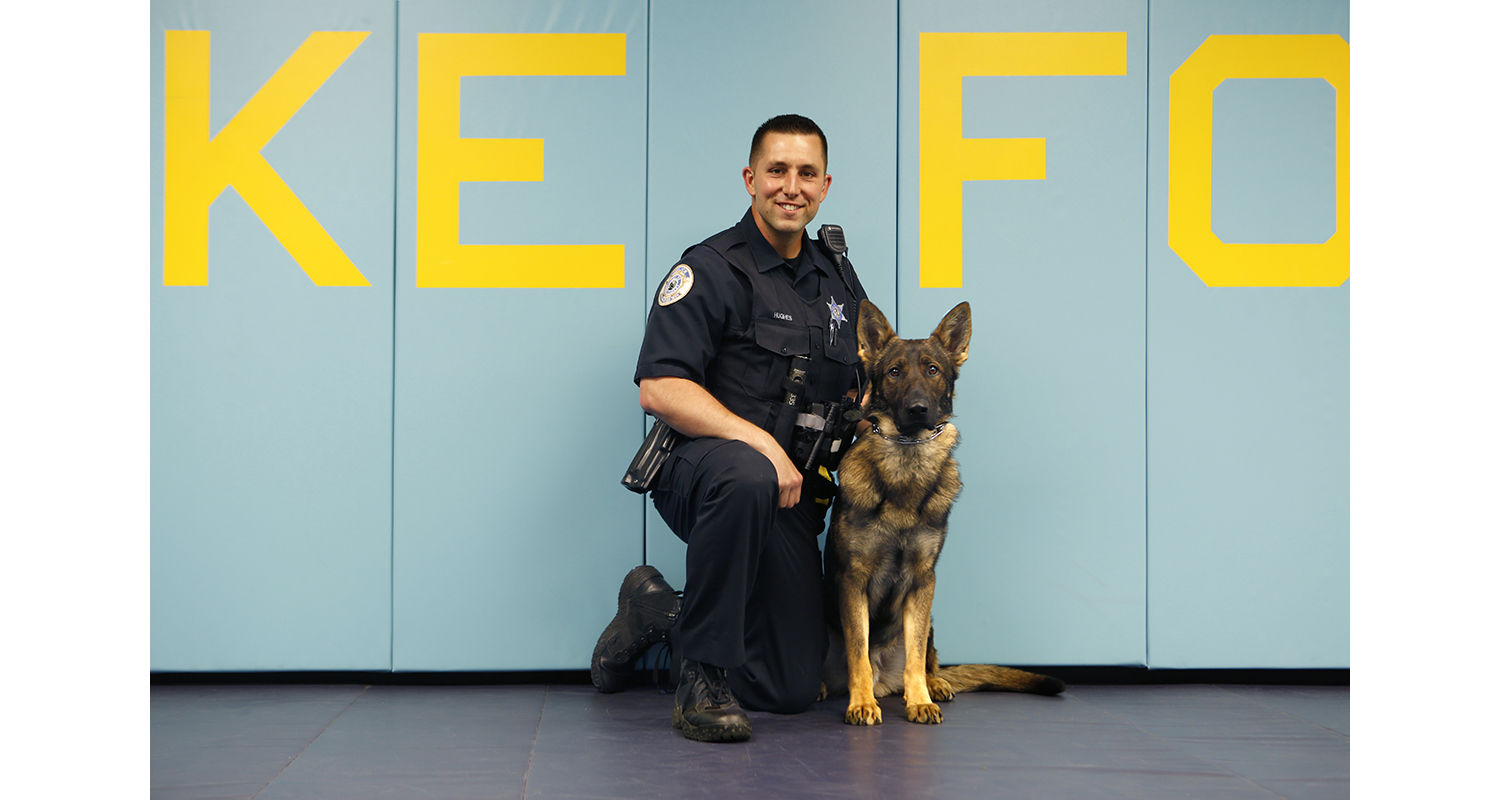 In addition to patrolling Lake Forest, Chase will be available to other police departments who do not have a dog, or may need extra assistance. At the same time, having Chase opens new avenues for LFPD community engagement.

“Cub Scouts, Girl Scouts, demonstrations at schools, events like our Fourth of July celebrations” Copeland explains as examples. “We are even having cards—like baseball cards—made with Chase’s picture on them.”

To make it all possible, funds raised by the LFPF paid for the canine squad car and equipment. The purchase of Chase and the cost of his training was funded through a generous contribution from the Havey Family and a grant LFPD obtained from the DAS Charitable Fund of Lake County.

To find the right handler for the dog, LFPD didn’t have to look far. Although several officers interviewed for the position, Mike Hughes, who had been with LFPD for seven years, was the winning candidate. 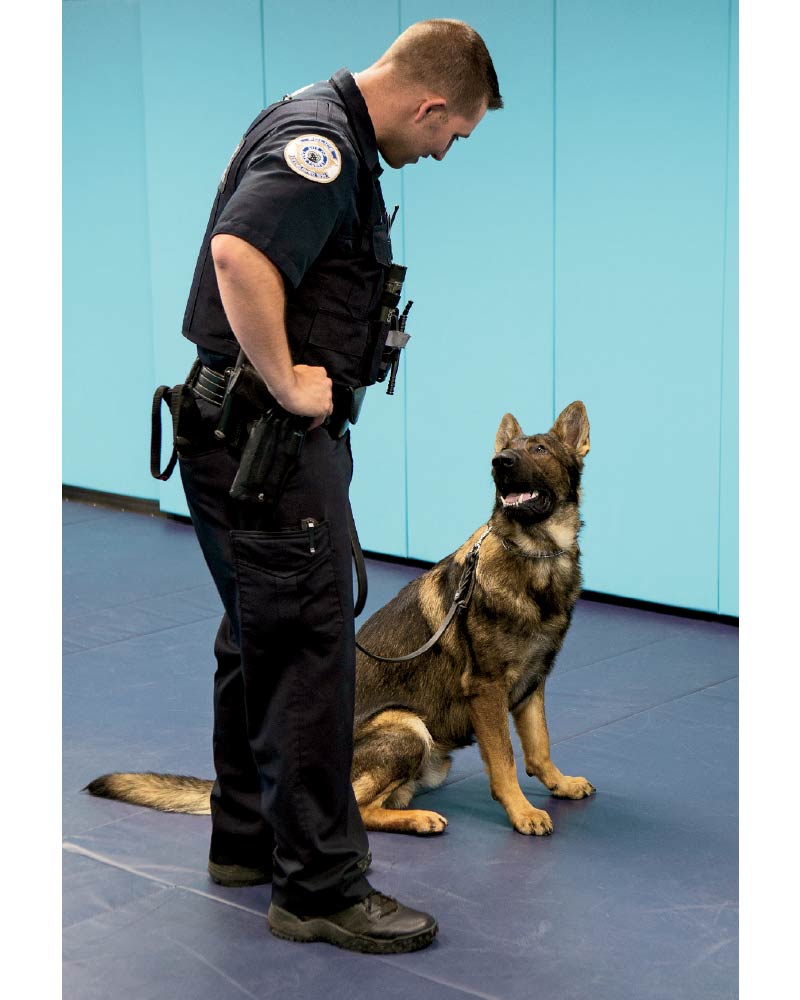 “It’s a young man’s game because you have to be fit, be able to run with the dog, and may have to track for many miles. The handler also needs to have been on the force for at least three to five years. Mike has all of that. Plus, he is a field training officer, defensive tactics instructor, and teaches in the Citizen’s Police Academy,” says Copeland, adding that of all the officers, Hughes seemed to want it most. “Each year on the write-in section of his evaluation form, Mike always wrote, ‘If there is ever an opportunity to be a canine handler, I would like to be considered’.”

In fact, Hughes says beyond aspiring to be a policeman, the goal of becoming a dog handler started when he was a little boy.

“I grew up near the TOPS Kennel facility where they train police dogs in Grayslake,” says Hughes. “When I was little, I loved to watch the dogs running up ladders and through tunnels on the obstacle course and watching trainers work with the dogs.”

Then as a teen, Hughes worked in the kennels at TOPS.

Now married with two young girls and a dog at home, bringing Chase into the family has been a natural transition.

“Chase loves the girls and has adjusted very well,” says Hughes. “In addition to the work we will be doing on patrol, I’m really looking forward to bringing Chase out to schools and organizations in the area. We’ve already been out to a local baseball game and the team was so excited to meet him.”