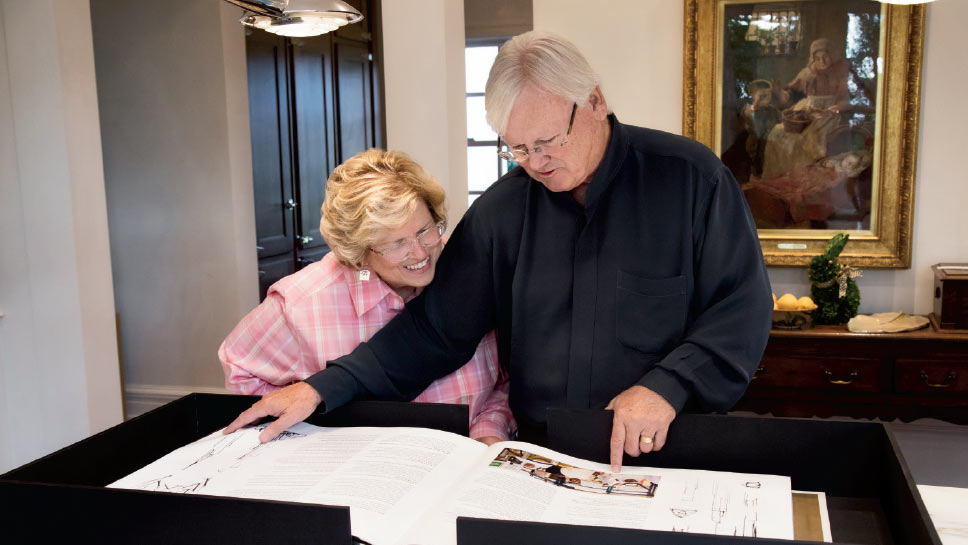 You are cordially invited to join Adrian and Nancy Smith for a regal celebration of Citadel Theatre as well as an inside look at the couple’s recent renovation-in-progress of a historic David Adler estate on Green Bay Road in Lake Forest. The curtain rises Saturday, July 13, on what promises to be a night to remember. PORTRAIT PHOTOGRAPHY BY APRIL GRAVES. ARCHITECTURAL PHOTOGRAPHY BY ADRIAN SMITH

A royal ball to support Citadel Theatre, they say? Well, that certainly does sound fancy.

Sounds like gowns fit for a duchess and crown jewels and all the formalities that such a regal designation commands. However, talk to Nancy Smith—who will be throwing this “ball” with husband (and world famous architect) Adrian Smith at the couple’s David Adler estate-house-renovation-in-progress in Lake Forest on July 13—and you will get an entirely different impression.

“Adrian and I will not pretend or put on any airs. We both come from humble backgrounds and enjoy life. It is a blessing to be able to give our time in this way to Lake Forest, a community we love,” says Nancy, speaking on the telephone during a recent trip to Paris, which included a month-long painting class. “Every person who comes will be special to us. It will be an event of joy, warmth, value, and mostly support … we will have a blast.” 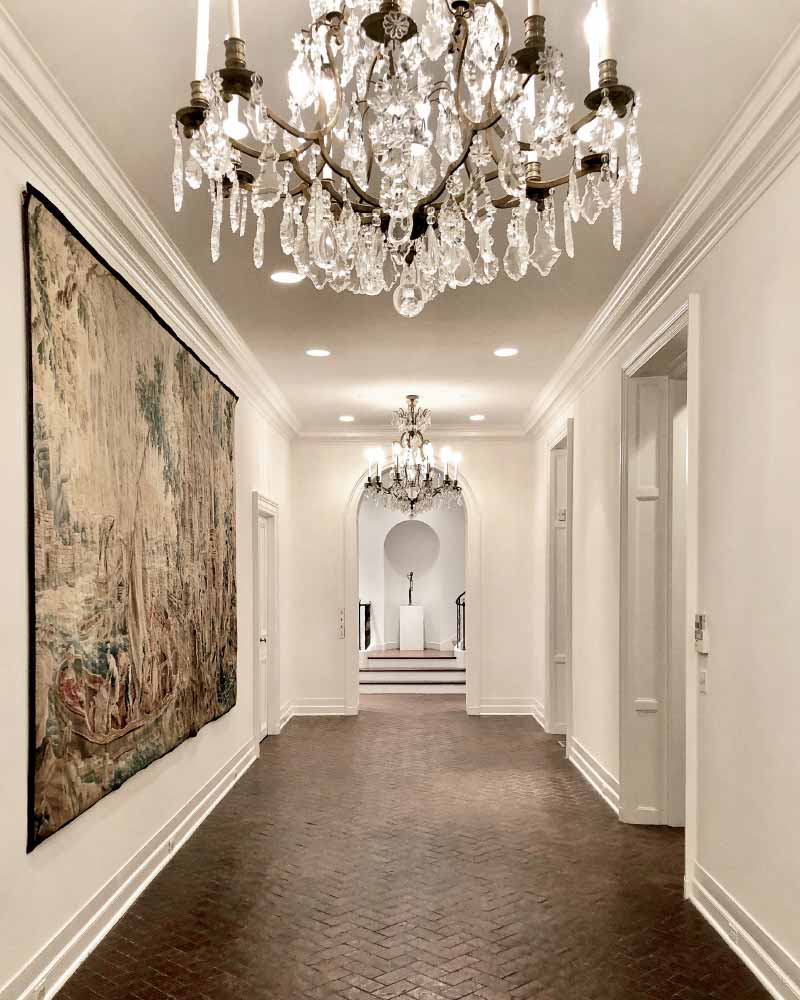 The dress code? While black tie attire is always apropos, Smith emphasizes that (shh…) she honestly doesn’t care what people wear to the fundraiser. “They can wear whatever suits them the best,” she says. “It’s not about wearing something; it’s about loving and supporting the theater. That’s the glamorous part.”

But for Scott Phelps, who co-founded Citadel Theatre in Lake Forest with wife Ellen Phelps 17 years ago, having a vibrant, creative, generous spirit like Nancy among its supporters has been a game changer that’s nothing less than glamorous. It was she that stepped up and volunteered to elevate the modest annual theater fundraiser to gala status (at the Smiths’ bucolic “cottage” in Mundelein, no less).

“We had done fundraising in the past but nothing to this scale,” says Phelps, explaining that early events drew 50 to 75 people while the ones the Smith have been involved in have had guest lists that pushed 400. “The Smiths have been so loyal and such good patrons of the arts. We are forever grateful for their support, along with all the other subscribers and supporters.” 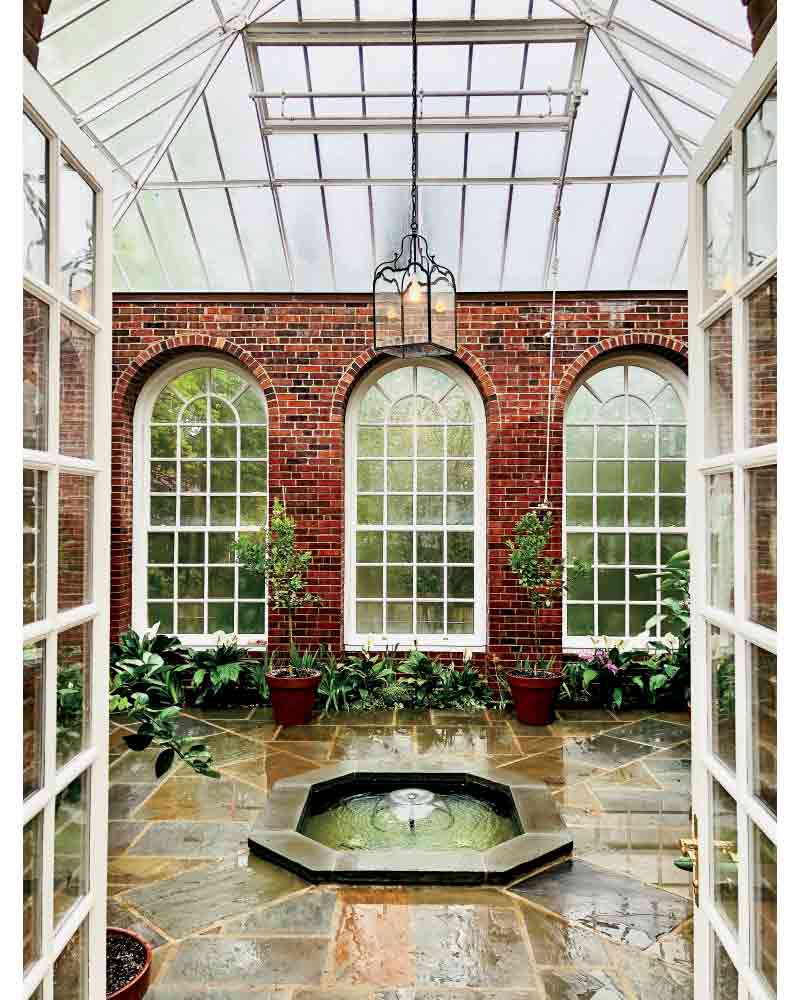 And so, what Phelps and Citadel and the Lake Forest community have next month is a ball. Not a gathering. Not a gala. But a ball, with a capital B. Royal in theme, all meant to “raise the curtain” on not only Citadel’s year ahead but also the progress made so far in the Smith family’s restoration of an iconic 22,000-square-foot mansion.

Designed by David Adler in 1930, the estate known as Innisfail II has been home to several prominent Chicago families, including Joseph Cudahy of Sinclair Oil and W. Clement Stone, author, philanthropist, and insurance tycoon. While the mansion was once considered the finest of its kind on the North Shore, it sat in neglect over the last 17 years as it was abandoned by a previous owner. To have Adrian Smith, arguably one of most renowned architects of the 21st century (he’s currently designing the tallest building in the world in Dubai) take over the restoration of legendary architect from the previous century is nothing short of poetic.

“To me, it was an honor and a privilege to be in a position to acquire and save this David Adler designed estate home,” says Adrian, crediting Adler for his significant architectural contributions to Lake Forest. “The house at 830 Green Bay Road that he named Innisfail II is especially important because of the time it was done, in 1930, not long after he returned from France. He was still grieving from his wife Katherine’s death in France a few months before. He designed it in the style of the French Normandy Country Manor homes with multiple buildings forming a compound. It was the beginning of the Great Depression so it was understated and modest in its features, subdued and elegant in its proportions. It is important because of its location occupying almost the entire west edge of West Park thus it is very visible to anyone in the park or traveling on Green Bay Road. It is interesting to note that Adler mixed his style references in this home, using French-motif elegant carved wood painted panels in the more formal rooms, rustic wood panels of a more common type in the library and south room, and Art Deco influenced details throughout the house as seen in its stairway handrails and decorative medallions at the fireplace.” 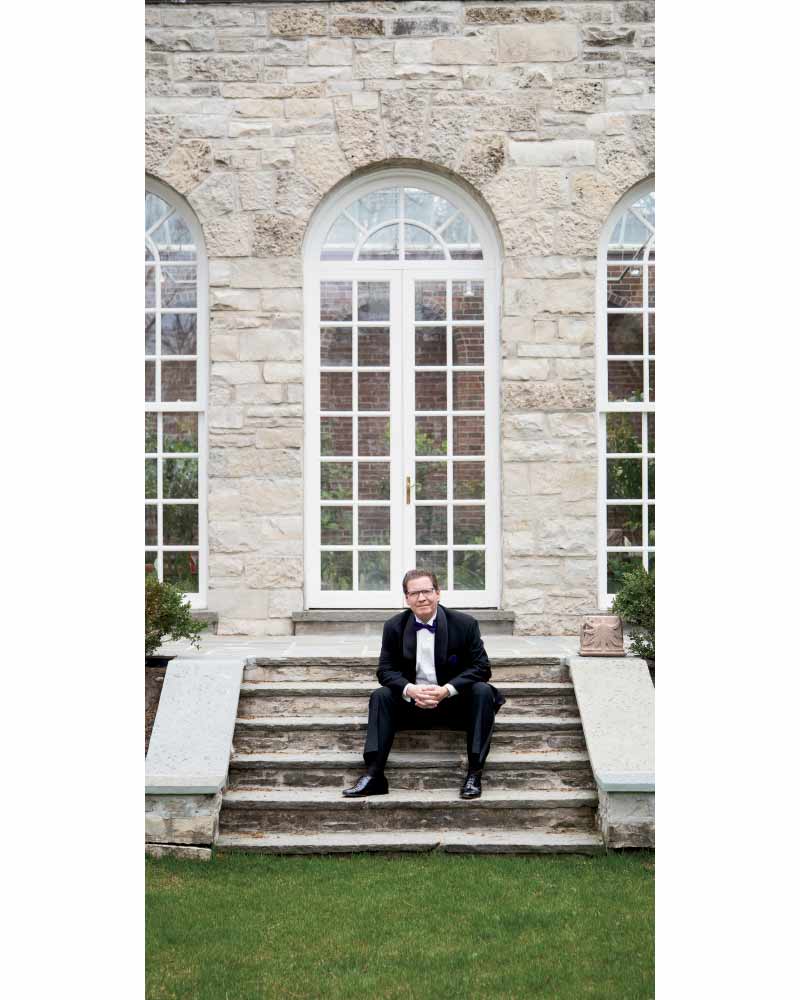 By the time Adrian and his Smith Family Project (which includes his son, Jason Smith) purchased the property two years ago, that grandeur was but a memory.

“Having been abandoned for the better part of two decades it was severely damaged by freeze thaw cycles that broke over 75 pipes in the plaster walls causing great damage to the basement, the wall decoration, and the floors near the breaks,” he explains. “Virtually every painted or papered surface had to be scrapped down to its natural material, cleaned, primed and painted.”

The greatest challenge for the Smiths was deciding what to keep and what to modify or replace. With four previous owners, modifications to the original architecture were made by other architects, some in the spirit of Adler but others missing the mark completely.

“What I have tried to do is respect the architecture of Adler, and make as few changes to his work as possible—all while trying to improve the modifications that were made by successive architects and ripping out the most unacceptable mistakes,” Adrian says. “It is not a finished work. It is a work in progress. There is still much work to do to make it fully useful but we have come a long way.”

When guests come to The Royal Ball on July 13, they will get the first look behind the curtain to see the progress that’s been made and the potential that lies ahead. April Graves, a local photographer and chair of next month’s Citadel fundraiser, says she likes to think of the event as a “raising of the curtain” in support of the theater but also the Smith project—another labor of love in the name of art.

“As an artist myself, I am very aware of the lack of funding and attention brought to the arts. I love that Citadel has such a strong giving program for education as well as their platform for donating tickets to those who might not otherwise get the opportunity to experience live theater,” says Graves, explaining that in addition to serving as the chair of this event, she has also been working behind the scenes to develop The Royals Collection— a classic portrait series created at private North Shore estates and inspired by the style of the British Royal Family, all to benefit Citadel Theatre. “The Smiths have graciously agreed to allow me to photograph 20 Royal sessions there at the Lake Forest property to include in the silent auction for this year’s gala.”

She also expresses gratitude to Scott and Ellen Phelps as well as the team of co-chairs who are working with her to make The Royal Ball one of the most magnificent (and successful) fundraisers in Citadel history. Nancy Smith, who is an accomplished painter and fine artist in her own right, echoes those sentiments.

“Working with the men and women on the gala committee is really very special,” she says. “They are all creative and fun … and I like fun. So many of these committee members are incredibly talented. We are so terribly grateful for them.”

Nancy also says that supporting an organization like Citadel Theatre is important not only to Lake Forest but to the surrounding communities its programs benefit. As the one of the few Equity theaters on the North Shore, she says the work it does is necessary to the growth of our community and of society at large.

“My first experience with Citadel was seeing a play when they were at the Grotto Room at Gorton Community Center. The play was performed so professionally and had such a lasting impression that I became curious about the theater and wanted to help support it,” she explains, referring to the early days of Citadel, before they moved to the Lake Forest High School auditorium space in West Lake Forest. “Not only were professional plays performed throughout the following years as the theater grew but Scott and Ellen Phelps served the public through children’s programs in Lake Forest and underserved communities. It exposes them to the arts and it gives them confidence, and these are important things.”

From Adrian’s perspective, being able to “raise the curtain” on this renovation-in-progress in support of Citadel Theatre is part of his long-term vision for what the property could mean to Lake Forest.

“The big challenge is how do we make this property relevant to our current culture and future period in history while respecting and glorifying its past,” he says, adding that he hopes that all who attend The Royal Ball will “remember that a great time was had by all and that they were a part of forwarding the arts in Lake Forest through the Citadel Theatre.”

So … will this ball be fancy? Probably. But much like Nancy Smith, even a princess knows how to have fun.

Festivities for The Royal Ball including a 4 p.m. to 6 p.m. tour of the estate, including gardens in progress, followed by a 6 p.m. dinner, live auction, and dancing to the Stanley Paul Orchestra. Tickets start at $300 per person. For more information, visit citadeltheatre.org.