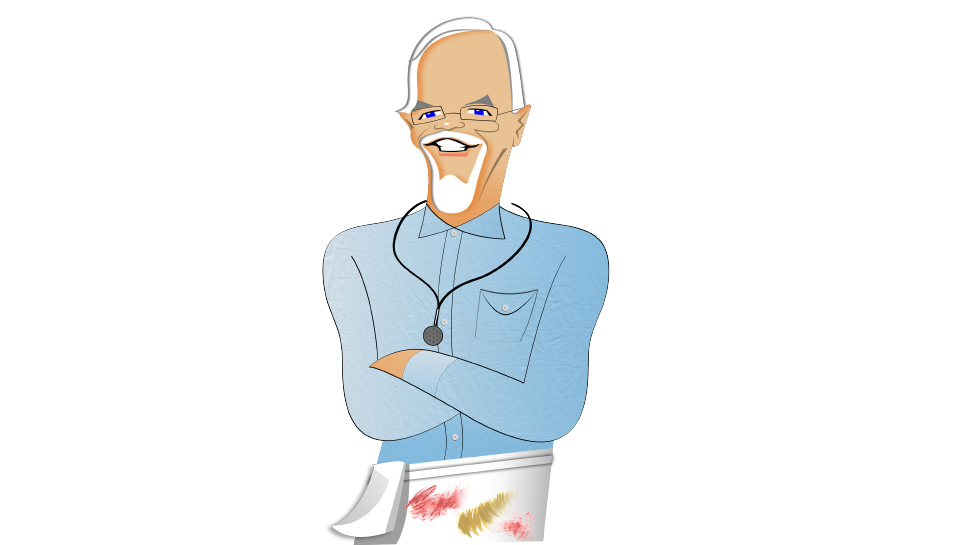 Lake Forest’s Dr. William Benge reaches into his medical bag of tricks to save a choking customer while “filling in” as a busboy at a popular Winnetka eatery. ILLUSTRATION BY ROBERT RISKO

Retirement can be full of surprises. And as Dr. William Benge learned, some surprises may be ones that you’ll never forget.

Dr. William Benge, a Harvard-trained cardiologist, recently retired from working with Northwestern Medicine Lake Forest Hospital and had some time on his hands.“I’ve been teasing my family that they needed to find me a job,” Dr. Benge says with a laugh. “I was getting a little restless.”

Dr. Benge’s daughter, Alina, works at Trifecta Grill in Winnetka. On the Saturday evening before St. Patrick’s Day, the restaurant found itself one busboy short.

“We knew we were going to be busy because it was St. Patrick’s Day weekend so I texted my dad, half jokingly, and asked him if he would mind filling in,” Alina says. “Dad only asked me one question—what should he wear? After telling him to grab a green shirt and black pants, he was on his way.”

Fifteen minutes after he arrived the restaurant and put on his apron, Dr. Benge was bussing the first table of his first post-retirement shift when another restaurant employee alerted him that someone might be choking.

“We went right over to the table and the woman couldn’t talk, couldn’t speak, couldn’t really move, and she was making this sound that made it clear to me that she was choking,” says Dr. Benge. He then administered the Heimlich maneuver, a tool he had only used once before in his decades of practicing medicine.

“I went behind her and gave her an abdominal thrust that was enough for her to be able to swallow,” adds the doctor. “It was only a few minutes before she and her husband were once again enjoying their dinner—albeit in tiny bites.”

As Trifecta returned to their Saturday normal, its employees had a moment to catch their breaths and reflect. “I seriously wonder what would have happened had my dad not been here,” says Alina. “He just jumped into action without even thinking—he knew exactly what to do.”

“Talk about being in the right place at the right time,” says Patrick O’Neill of Dr. Benge, who along with his wife Mary, owns Trifecta Grill. “I’m sure he didn’t think he’d need to put his medical skills to work while he was helping us out.” O’Neill was also quick to add that he’s going to hold a workshop for his employees on how to administer the Heimlich should another situation like this ever arise.

“When I was telling this crazy story to my wife Linda after work that night, she asked me if I told the couple that I was a cardiologist,” says Dr. Benge. “I didn’t. And it’s important for people to know that they don’t need to be a doctor to have this skill. Everyone should know how to give the Heimlich.”

Before the couple left Trifecta that night, the choking victim’s husband tried to give Dr. Benge a $20 tip for his efforts, but the good doctor waved off the generous gesture.

“I was happy I was there to help.”