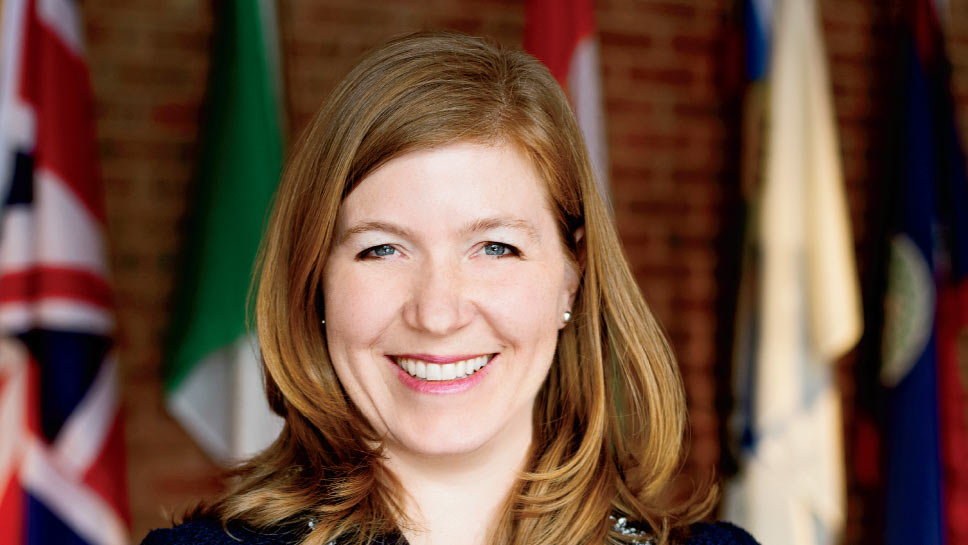 Shepherding students through their experience at Woodlands Academy of the Sacred Heart, head of school Meg Steele keeps her eye on every aspect of development. Social, emotional, intellectual, academic—the spheres all touch. Ever vigilant, Steele and her team at Woodlands are astute at noting trends in the student body, and in the professional landscape at large, as they seek to open doors of opportunity to women. One recent concern has been the continued decline in the number of women in leadership at Fortune 500 companies—especially in finance and technology.

“In 2018 alone, there was a 25 percent decline of CEOs in Fortune 500 companies,” says Steele, citing information from The New York Times. “We have so many students who excel at math and science, and like other young women, have the talent and skill for top jobs, but a lot of them just haven’t envisioned the way up into the C-Suite.”

Woodlands Academy is featuring a new educational event series, “Imagine Her in the C-Suite,” an ongoing series that will launch publicly with a powerhouse panel of female executives at 6:30 p.m. on April 17 at the Gloria Dei Center on the Woodlands Academy campus.

The April 17 talk—offered free to the public, will be Q & A format, with Woodlands Academy students interviewing panel members. The hope, says Steele is to give the speakers the chance to share their paths—both the success stories—as well as the failures that helped shape their professional development.

“I hope through participating in this panel, I can help young girls see their tremendous potential, and understand that they are already working toward their future, even if they don’t know where that road will take them,” says Duke. “By hearing about our journeys to professional success, my hope is it will help girls begin to imagine a future for themselves where they are contributing meaningfully at the decision-making table.”

The April 17 event is actually the second part of Woodlands Academy’s 2018 series. The first, an intimate talk and interview session between Woodland students and Connie Capone, CFO for SpotHero, took place March 7, at the Academy. Woodlands plans to continue to evolve and grow the series.

“The idea of adding the second event for the public was based on interest we had for such an event, after hosting a talk last year with Joe Ricketts, former CEO and Chairman of TD Ameritrade,” says Steele. “During that talk, the students gained so much insight into not only the success Ricketts had as an executive, but the path—including a lot of failures, he took to get there.”

Steele also saw the opportunity to tie these talks into the mission of the Academy’s Center for Global Studies. “Our students are from all over the globe, and today’s executives work for global companies. Helping young women gain confidence to envision the steps to not only navigate their way into the C-Suite but also to understand the complexities of doing so in a cross-cultural, global community, is crucial,” says Steele.

“There’s a tendency for young women to look at highly successful people and think, “Oh, they know the secret,” When in fact, CEOs are people with flaws and failures, too. We hope with this series say to our students and young women at large, “Don’t count yourselves out! You have what it takes,” Steele concludes.

For more information about the “Imagine Her in the C-Suite” event, visit woodlandsacademy.org or call 847-234-4300.