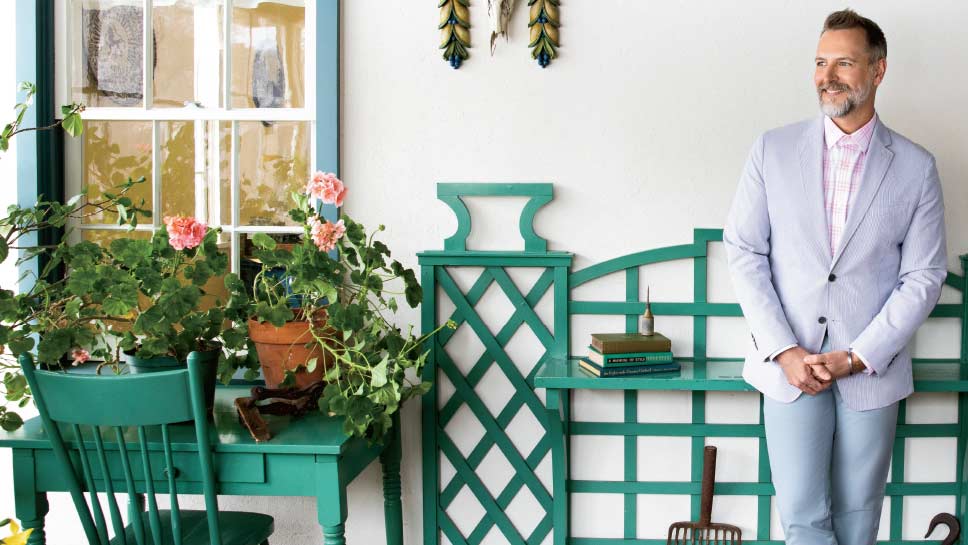 Ragdale Foundation’s Artistic Director Jeffrey Meeuwsen has been orchestrating, facilitating, and advocating for art of all descriptions most of his life. So, when our historic artist’s retreat went looking for a new leader nearly seven years ago, it seems like a role he was destined to play. With Ragdale’s Novel Affair fundraiser just weeks away, we decided to sit down with the man writing the script. PHOTOGRAPHY BY ROBIN SUBAR

From the outside looking in, everything about that West Michigan peninsula town was tourist brochure perfect, the vintage kind that folds out with useful information about population, history, and notable landmarks. It had a strong Dutch immigrant culture, deeply rooted in God and family. They were frugal, hard-working people, as fastidious about church service obligations as what was on the dinner table.

But to a smart, creative kid like Jeffrey Meeuwsen, nothing about Grand Rapids seemed rooted in the life he knew must exist outside its city limits.

“Everyone in my world looked the same, dressed the same, ate the same food, and worried about what all of the others were thinking. Sameness offered a comfortable life, but I always felt stifled and different,” explains Meeuwsen, who has been leading Lake Forest’s Ragdale Foundation as executive director since 2012. “From a very early age I had a sense that I was living in an artificial place, like a beautiful, carefully crafted snow globe—and that there was a whole world outside that I couldn’t reach.”

As an adult, he embraced some aspects of his Dutch roots—a commitment to hard work, the ability to accomplish a lot on a very tight budget, and an entrepreneurial spirit. But Meeuwsen also very intentionally cracked open that snow globe, dedicating his career to advancing an inclusive, open, provocative world—one that encourages exchange between diverse points of view and nurtures creative expression, from beginning to end.

While Ragdale wasn’t on his radar back then, or even 10 years ago, the path that brought him to the office of executive director of Lake Forest’s beloved and nationally renowned artist’s retreat seems almost meant to be.

As Ragdale prepares to celebrate its 13th annual Novel Affair—an evening that brings together acclaimed authors for an evening of creativity and conversation on April 27—we stopped by the historic artists’ retreat in Lake Forest to learn more about Meeuwsen and his vision for what comes next.

“We have accomplished a lot in recent years—eliminated $1.2 million in debt, nearly tripled the number of fully-underwritten fellowships, secured a substantial pledge to build an exciting new dance studio, established a 32-member curatorial board, introduced new IT and accounting infrastructure, launched a comprehensive rebranding, bolstered online presence, developed and tested new event models, prioritized equity and inclusivity, and hundreds of other improvements large and small,” says Meeuwsen, taking time out of his busy schedule to facilitate a photo shoot and tell his personal story. “I love it all, but my two passion projects have been the Ragdale Ring competition and Ragdale in Schools.”

To understand the leader that Meeuwsen is today is to know where he has been, and the things that led him on the path to Ragdale. That journey was far from linear.

“I was never one of those kids who knew what I wanted to do from an early age. I was always curious and hungry to learn something new. I was good in school and loved it all … art, science, math, reading and writing … even gym class. I found it very hard to select one path,” he says. “My parents’ approach was to let it all happen. My teachers confused me further—each pushed me toward the subject that they taught. In college, I had the foresight to study everything that interested me—engineering, psychology, medicine, architecture, art, design, and business.” 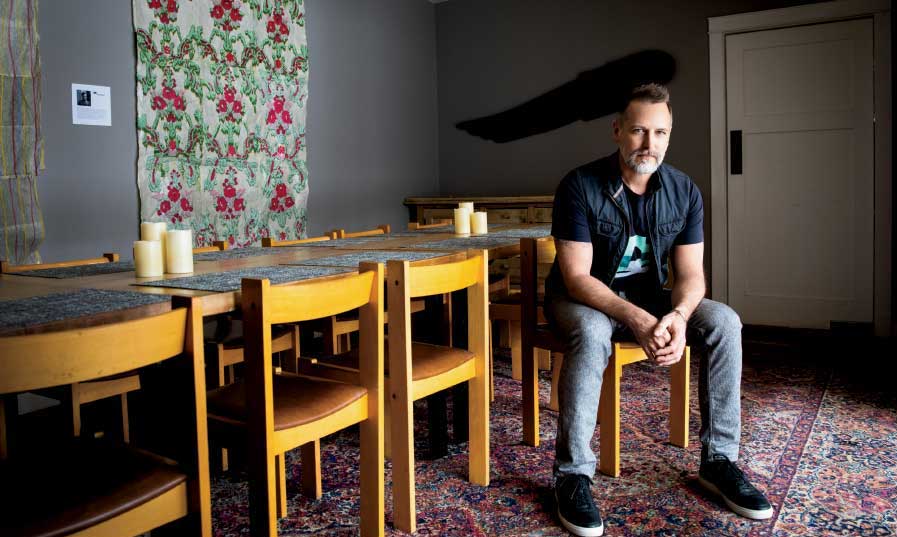 Jeffrey Meeuwsen in the Ragdale dining room, a place where visiting artists come together for meals.

He worked in hospitals assisting in autopsies. He sold acid-washed jeans at the mall. And through it all, young Jeffrey Meeuwsen changed majors nine times, graduating with 32 extra credits.

“But I did it all in four years and have no regrets,” Meeuwsen says, smiling. “I needed to know what was out there.”

He turned a double major in marketing and graphic design into a 10-year gig in the advertising and market research world. Both positions were international in scope, allowing Meeuwsen to engage with people and cultures all over the world. “The work developed my design, communication, and critical thinking skills,” he explains. “It also gave me regular exposure to issues in finance, legal, human resources, and IT—all important to me today.”

Even so, he was hungry for something more creative and more meaningful.

“I began volunteering for a local arts organization, doing anything required, from painting walls to moving boxes to hanging shows to event planning to branding and communications. Around this same time, my ad agency took on several pro bono clients including the United Way, Junior Achievement, and the Grand Rapids Art Museum,” he says. “I loved working with these nonprofit organizations and their community-based initiatives.”

The future began to come more in focus. Then, while in Boston celebrating the turn of the last century, Meeuwsen had an epiphany.

“I realized it was time for something more. On the flight home, I decided to leave the comforts of my corporate job and go back to school to pursue a fine arts degree in sculpture and studio furniture,” he says, explaining that he ultimately earned both a BFA and an MFA in visual arts.
“I started a design consultancy with a focus on the acquisition and placement of art, furnishings, and hardscape in private gardens. I loved this time of learning, making, and consulting. I also enjoyed several study trips abroad, spending summers in Florence and Prague.”

It was one evening dining at a revolving restaurant in Prague that a colleague informed him that the arts organization where he had been volunteering was about to close its doors due to financial challenge and the loss of its executive director.

“I must have revolved around in that restaurant a hundred times debating my next steps. I couldn’t see the organization that was so important to me go under. Its focus on contemporary, experimental emerging artists was a vibrant response to the conservative nature of Grand Rapids,” says Meeuwsen, who returned home and within two months was the new Executive Director of the Urban Institute for Contemporary Arts (UICA).

The first two years at UICA were spent rebuilding all aspects of the organization. By year three, the organization was debt-free and operating in the black. “In year five we were approached by city leaders to become the anchor in a new mixed-use development on the city’s busiest intersection,” he adds. “By this time UICA was one of the largest non-collecting contemporary arts organizations in the Midwest, presenting more than 30 exhibitions annually, independent film, dance, music, performance art, writing and professional residency programs, adult classes, and youth job training.”

Simultaneously, the UICA board had grown to include Rick DeVos, grandson of Amway co-founder Richard DeVos. “Rick approached me one day to help him launch an idea. That discussion led me to become the founding director of Artprize, an enormously successful 19-day arts festival in Grand Rapids now known as ‘the world’s largest public art event’,” adds Meeuwsen, explaining that Artprize now draws more than 500,000 attendees and generates a net economic impact of $33 million annually.

By the time Meeuwsen finished his tenth year at UICA (including a $9 million capital campaign and the design/construction/move to a new museum facility), and the completion of his MFA, he was again ready for a recalibration and life change.

“My passion throughout had been in helping artists to take creative leaps in the development of important new work. I knew firsthand that creative retreat away from the demands and distractions of everyday life was more valuable than ever,” he says. “I had friends who had been in residence at Ragdale and through them, I learned that a position might be open. The timing was ideal.”

That was six and a half years ago and Meeuwsen’s impact on the nationally acclaimed artists’ retreat has been significant.

“In Ragdale I found all that I was looking for—a uniquely rich art and design history, a singular focus, an inspiring mission, and an organization that was not yet fully formed,” he explains. “As it turned out, Ragdale was facing many of the same challenges as the UICA in my early days—substantial debt, lack of visibility, aging/missing infrastructure, and the loss of leadership. My creativity is sparked by problem solving, so … call me crazy but it was a perfect marriage.” The focus this month is on Ragdale’s Novel Affair fundraiser, an event that has grown exponentially under Meeuwsen’s leadership.

“Novel Affair is a window into the wide range of talented artists, writers, designers, and scholars that spend up to 25 days at Ragdale every year. While our primary goal is to offer artists uninterrupted time and space to develop new work, I believe we also need to recognize what a rare resource exists in the pool of talent at Ragdale,” he says. “There is no other organization in Greater Chicago that hosts and supports more artists per year than Ragdale. We have a responsibility to make meaningful connections between working practitioners and the public.”

For the third year, featured writers will offer presentations in schools from Chicago to Zion on Friday, April 26, as part of the Ragdale in Schools program that Meeuwsen founded. The 2019 lineup includes the following award-winning writers and poets:

“Ragdale in Schools draws from my own personal experience as a creative kid without an outlet to explore my skills and interests. Today’s creative young people will be the answer to so many the world’s challenges and we must nurture them in every way possible,” he explains. “It is the ones in less-advantaged neighborhoods that need our support. Creative kids often learn differently and they may struggle because systems are failing them. Artistic and educational inequality pains me—especially when the resources are here to offer hope and inspiration to all our youth.”

Novel Affair events continue Saturday, April 27, with a cocktail reception at Shoreacres, a historic golf club and David Adler-designed clubhouse. The reception is followed by intimate dinners in distinctive North Shore homes, each dinner featuring a pair of writers.

“It will be a terrific mix of authors that may be more familiar with a few that audiences need to learn about,” explains Meeuwsen. “I encourage people to go where they haven’t gone before, to read new works, and to discover a new talent—all the while knowing that proceeds from the event will bring artists and authors into our schools, inspiring the next generation of creative achievers.”

His energy and passion is infectious, a sign that the “creative kid” is still there in the accomplished leader Meeuwsen is today. Life outside of Ragdale is spent near the lake at home in Evanston with husband of more than 25 years, Steven Samson, and the couple’s cat, Cava.

Traveling to the historic summer home of Howard Van Doren Shaw every day is a mix of honor, joy, peace and responsibility, he says. There remains one struggle though, one he has taken on as his mission to change.

“It’s the greatest question of all—why are so many people unaware of how extraordinary Ragdale is?” Meeuwsen concludes. “It’s in their backyard! We’ve accomplished so much on a shoe string budget. I can only dream about what we could do for the region with real investment.”

For more information about Ragdale and Novel Affair, visit ragdale.org.