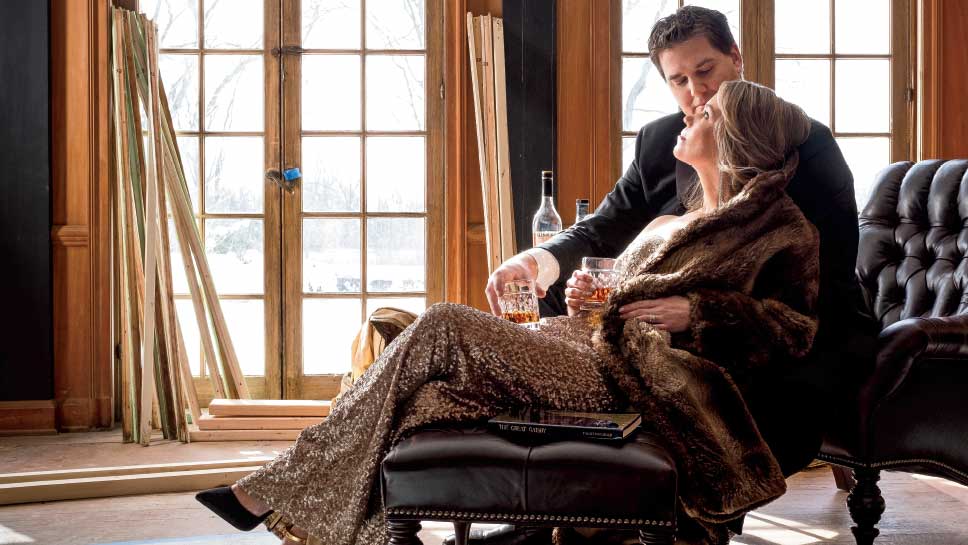 We meet the young couple who is rescuing an iconic Lake Forest mansion from the wrecking ball and restoring it to the elegant days of garden parties and an infamous summer romance for novelist F. Scott Fitzgerald. PHOTOGRAPHY BY FRANK ISHMAN

In a letter that F. Scott Fitzgerald sent to his daughter in 1940, the author famously wrote, “Once I thought that Lake Forest was the most glamorous place in the world. Maybe it was.”

The longing in that sentence is palpable. Not for the city as much as a big white mansion on South Ridge Road and the socialite who lived there more than a century ago. The influence that Ginevra King (member of an exclusive sorority in Lake Forest self-dubbed “The Big Four”) had on Fitzgerald’s work is well documented, most notably in the character of The Great Gatsby’s Daisy Buchanan. His time spent in Lake Forest and at that house (with its immaculate English gardens) shaped the writer he would become and many of the works he would contribute to the American literary canon.

Stepping into that home about 100 years later—a Howard Van Doren Shaw classic that came very close to being demolished after sitting empty for a decade—evokes a similar kind of longing. With boarded up windows, peeling paint, and all the fallout that comes from years of neglect, the elegant mansion where the King family wowed the young Fitzgerald has been frozen in time, just waiting for a new heroine to step in and recognize its significance to not only Lake Forest history but to American literature. 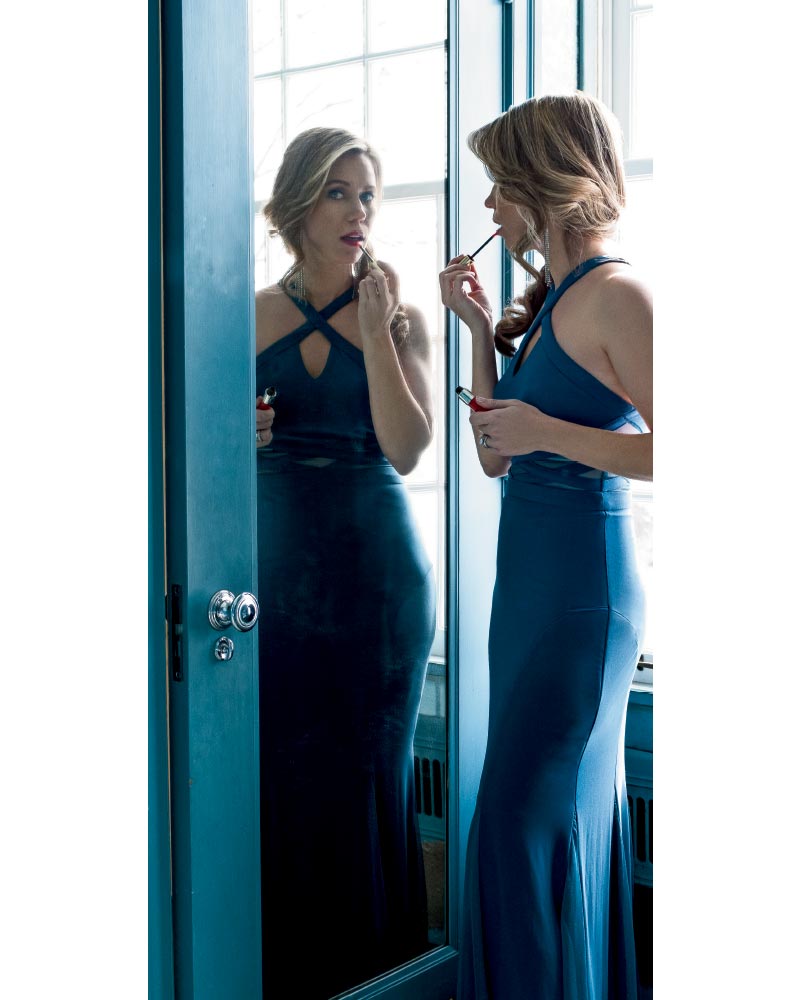 Jeanette Hodgkinson evokes bygone glamour in one of many of the home’s dressing rooms.

That unlikely heroine is Jeanette Hodgkinson. Her crew (and devoted husband and business partner Danny Hodgkinson) call her Patrona.

The Hodgkinsons purchased what is better known around town as “the Gatsby house” last fall with a vision to restore the sprawling property to the height of its glamorous heyday.

“We are discovering how well this house was built and it is very obvious Charles G. King spared no expense and cared very deeply for his home,” says Jeanette, who grew up in Woodstock assisting her father with construction projects—acquiring a wealth of firsthand experience. “We plan to treat the renovation the way he treated the original build, with great care and attention to detail.” 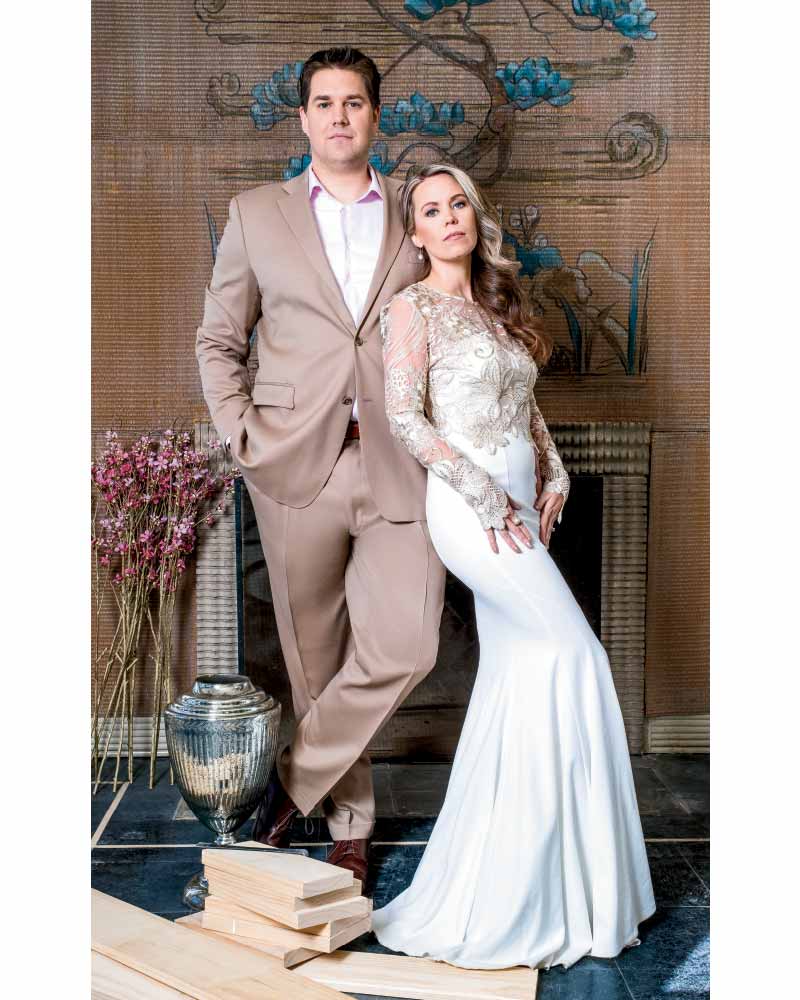 Danny and Jeanette Hodgkinson channel their inner Gatsby personas in front of a hand-painted fireplace mural. Props by Leggy Bird Designs are juxtaposed with piles of wood being used to rebuild the original windows.

She and Danny, a former state’s attorney in Waukegan who grew up down the road from this house when he was a boy, already had a business fixing up houses and reselling them.

“My background could not have been more different from Jeanette’s. I was more inclined to call someone like Jeanette’s dad than fix it myself,” says Danny, who now has a private legal practice with criminal defense attorney Steve McCollum. “Interestingly enough, when I mentioned to my mom that we were buying this house, she reminded me that when I was just learning to ride my bike, the last Reilly owner was out for a walk with his nurse. He and my mom struck up a conversation about what a great day it was to be outside and he offered us lemonade.”

Today, Danny says it is heartwarming to not only remember this story from his childhood but to know that someday he would be teaching his own son to ride his bike on the same street he did. As for the couple’s business, Belle Design LLC (named after their puppy, Belle), Jeanette says it started out of the tragedy of unexpectedly losing her father, who meant so much to her. 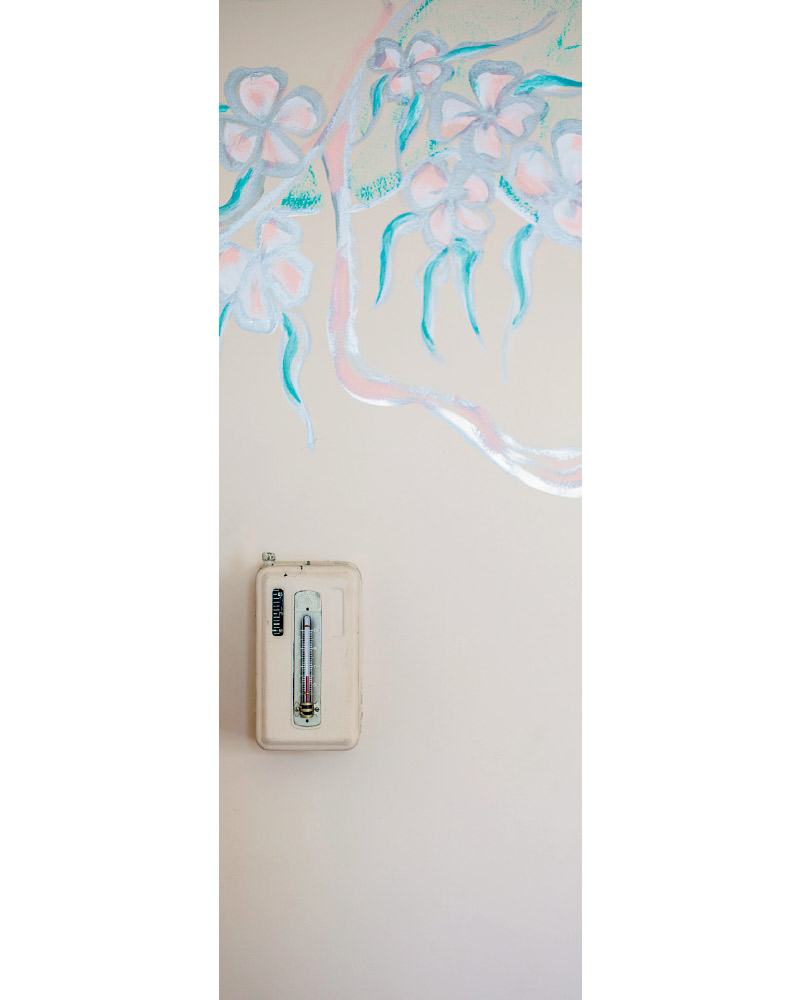 “My dad had a heart attack four months before our wedding,” Jeanette says. “At the time we were living in a first-floor condo on Diamond Lake and one of the third-floor penthouse condos went into foreclosure. We decided, along with the help of my mom, to take on a full renovation three months before our wedding. We did all the work ourselves with some help from fellow condo neighbors and family. It was fun and heartwarming for me to be able to use all my dad’s tools to create our new home. When we finished our condo, it was amazing. We instantly had a good amount of sweat equity so we decided to take another crazy leap and buy a single-family house to flip.”

Jeanette says finding new projects has become a hobby for the couple.

“For us, a fun Friday night is opening some wine and searching real estate listings. And it was one of those fun Friday nights that we stumbled upon this property. We were very confused as to how it fit into our realistic filters so we decided to drive by it,” Jeanette explains. “After driving around Lake Forest for some time unable to find the new street address, we texted our real estate agent and her response was “What on Earth are you guys up to!” She gave us the directions to find it and we immediately knew we had to get inside.” 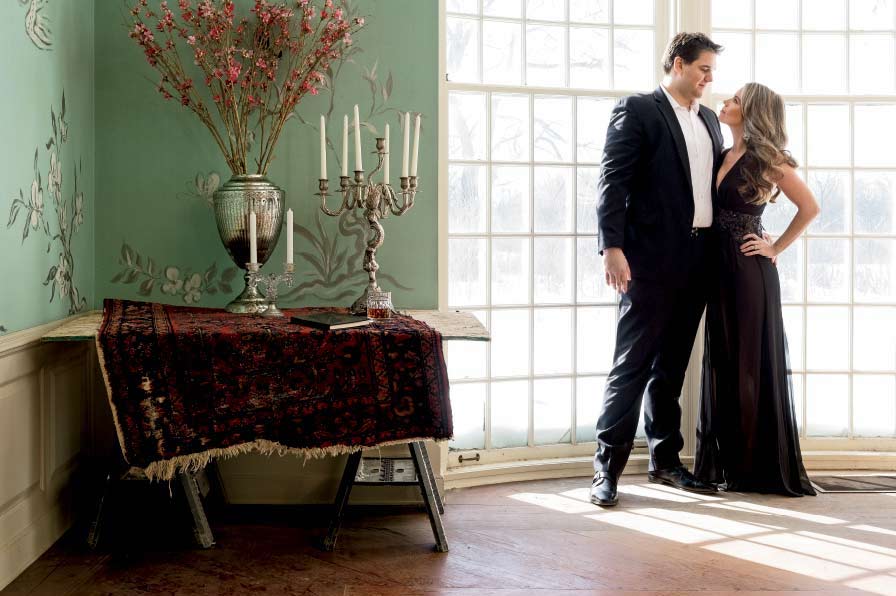 Danny and Jeanette Hodgkinson are excited about their future lives in the Gatsby house, where paintings by a previous resident (possibly a member of the King family) adorn the walls of the dining room. Leggy Bird Designs accessories help set the mood.

Much as the mansion enchanted the young Fitzgerald, the ghost of its ruins immediately enticed the couple to take on what they see as a forever home for their young son Bryson and Danny’s parents—who will live in a two-bedroom, three-bathroom apartment-style suite on the second floor.

“Knowing all that we know now about the home, it seems so magical,” Jeanette says. “I can just imagine the parties and the types of elite guests that would have come to this home at one time.”

As someone who loves history, Danny says knowing the story about Fitzgerald and Ginevra King helps every room in the house come back to life. “Seeing the way the home is laid out also impacts the way I read the book now,” he says. “Now knowing the strong connection to The Great Gatsby, I am trying to find ways of infusing Jay Gatsby into the renovation.” 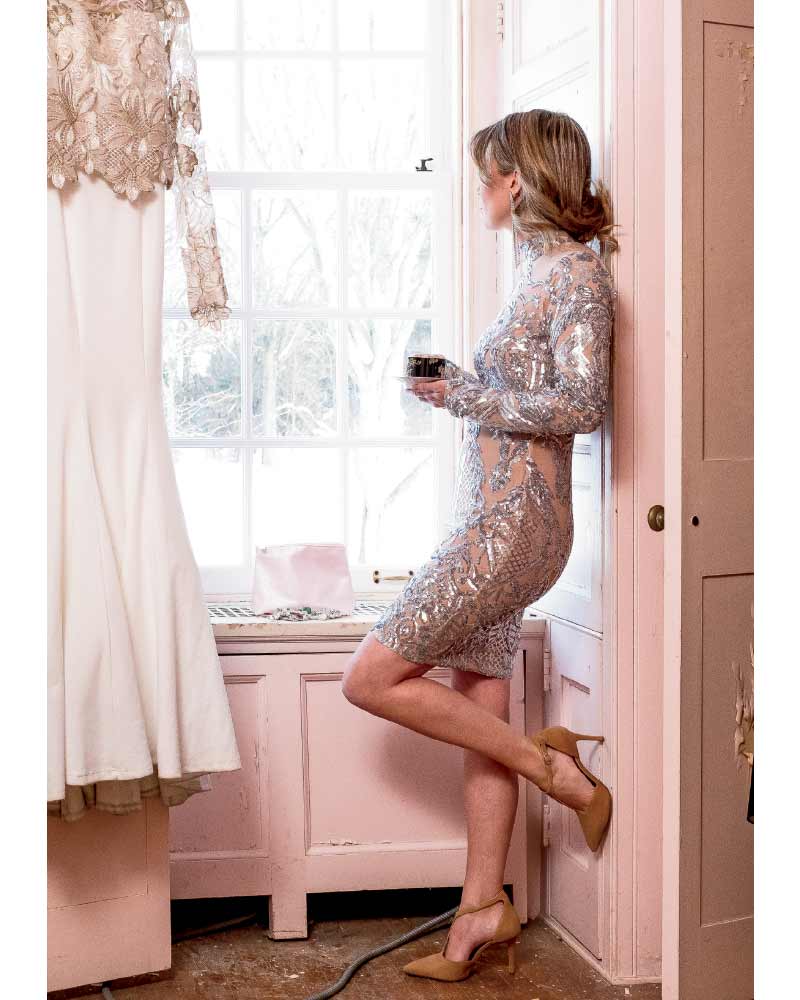 Jeanette Hodgkinson is feeling pretty in the original pink walk-in closet, a dream chamber where even the wooden shoe racks are customized to fit high heels.

As the couple learned through research, the home underwent an elaborate renovation in 1938, around the time of the Chicago World’s Fair. If anything, the additions and enhancements—including a circular Art Deco bathroom that was once considered the most innovative of its kind in America—only elevated the Gatsby-style glamour.

With an ambitious goal to move into the house sometime this spring, Jeanette and Danny are also working closely with the Lake Forest Preservation Foundation to give their labor of love the designation it has long deserved.

“The house was approved for Lake Forest landmark status. The next step is the Illinois State Historic Preservation Office, which will get this house recognized as a state and national landmark,” she says. “To qualify for this we need to follow the guidelines set by the Secretary of the Interior Standards for Rehabilitation. We are working with a fabulous team, Susan and Gwen from Benjamin Historic Certifications, and they are guiding us through this entire process.”

This bathroom, added in the 1930s, was once known as the most innovative in America. Note the weighing scale on the terrazzo floor (which can be read in the mirror above)

Just as Van Doren Shaw’s crew meticulously assembled each detail, Jeanette’s team is recreating all the pieces that have either been damaged or have fallen into disrepair—to the extent of replicating original windows by hand. After the house is done, the plan is to move on to the part of the property Fitzgerald mentioned so many times in his work, from The Great Gatsby to his short stories.

“We want to bring the gardens back to what they looked like when they were constructed during the years of 1917 to 1919,” Jeanette says, explaining that while they have been told the grounds were likely to have been designed by Jens Jensen, they are still tracking down official documentation. “The goal is to make the space into the elegant party spot it was built for, so once again … just like F. Scott Fitzgerald said … ‘The bar is in full swing, and floating rounds of cocktails permeate the garden outside, until the air is alive with chatter and laughter’.”

And maybe it will be, once again.