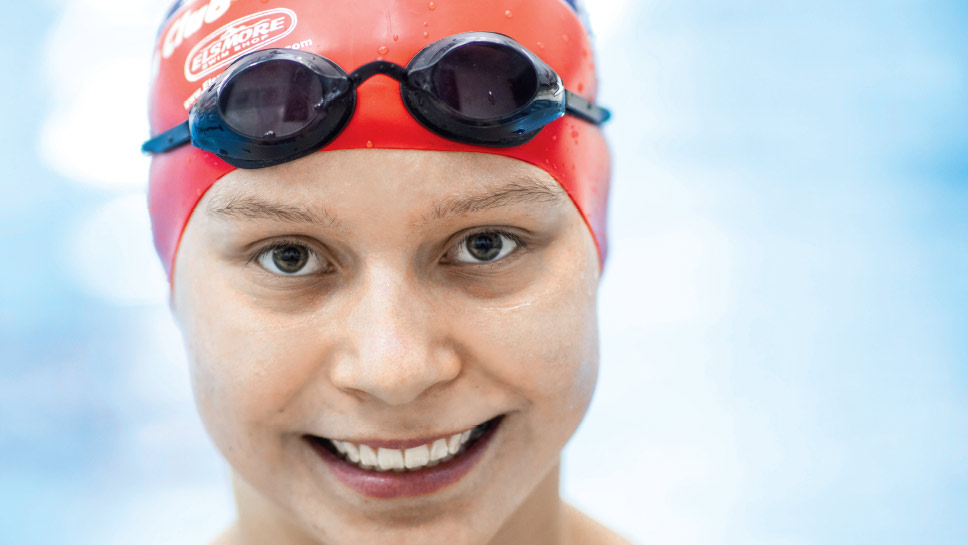 Following her inspirational return to competitive swimming after major scoliosis surgery, School of St. Mary eighth-grader Zuzanna Janusz eager to ease the fears of others with the condition. PHOTOGRAPHY BY JOEL LERNER

One of Zuzanna Janusz’s shoes was untied in music class one day. Janusz was 11. The concerned teacher at Holy Cross School in Deerfield practically ordered Janusz—a highly competitive COHO club swimmer at the time—to tie her shoe.

Class was about to begin.

Janusz hesitated. She was sitting in front of one chair and behind another. Close quarters. She was wearing, under her top, a bulky back brace, a cumbersome contraption prescribed to slow her rapidly curving spine.

Janusz looked down at her disorderly shoelace, dreading what she needed to do.

She began, slowly, to bend …

Today, Zuzanna Janusz is 13 and an eighth-grader at The School of St. Mary in Lake Forest. Holy Cross School closed its doors for good at the end of the 2017-18 academic year. A growth spurt had caused her spine to reach an extreme curvature of 55 degrees, necessitating intricate scoliosis surgery at NorthShore University HealthSystem’s Evanston Hospital in July 2016.

“We all have our greatest fears,” Janusz writes in her essay “Mountains and Medals,” composed not for a class but for the eyes of other frightened teenagers with severe cases of scoliosis. “Those fears can put us to the test during the trials of our lives. It us up to us not to allow them to conquer us.

“It is your own choice whether you will get up or give up.”

The Chicago resident feared the surgery would douse the fiery passion she had for swimming. She had, after all, achieved top-10 program times in several age-group events among COHO swimming club members.

“There were times, before and after surgery, when I would feel as if there was no way I could ever return to the top of competitive swimming,” she writes.

Dr. David Roberts, a pediatric orthopedic surgeon with a background in swimming performed the arduous operation. Janusz received two titanium rods and 19 screws. Roberts used new instrumentation and relied on a computer to help him navigate the screws safely.

The day after surgery, nurses instructed Janusz to walk five steps toward a chair. Her first step must have felt like a trek from Lake Forest to unincorporated Whisper Walk, Florida, and back. But Janusz completed the five steps and sat down. Next up? Put on socks. A nurse handed her a pair. Janusz endured excruciating pain but completed the task.

“My first mountain,” notes the 5-foot-7 Janusz, who “grew” an inch-and-a-half from the start to the end of the lengthy surgery. “I did not flinch or stop.”

Her passion for swimming, it turned out, became her constant companion, her timely prod, her lure throughout three months of persistent rehab.

“The thought of returning to swimming motivated Zuzanna greatly after the surgery,” says Janusz’s mother, Aldona, who, with husband Slawek and their only child, arrived in the United States from Poland in 2006. “She changed after her surgery, changed how she saw things. I’ve noticed more compassion from her, more appreciation for opportunities to swim again and compete again.”

Janusz returned to the pool three months after the surgery and raced again three months later. Back. The girl who had to wear a back brace all day and all night —except for PE classes and swimming practices and meets—was back, ready to hit the water again, stroke her heart out again, turn at the wall again, and then stroke her heart out some more. It took her a while to return to swimming shape and see her times improve, but her patience and perseverance got her through the rough waters. 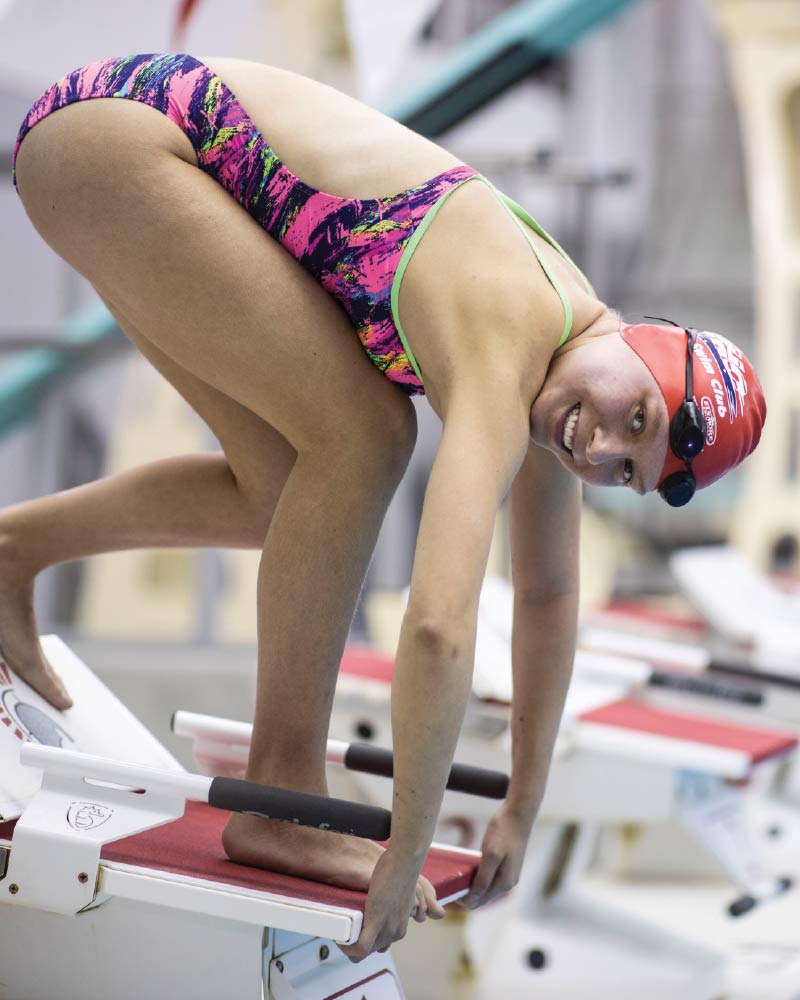 “Zuzanna is very mature and responsible for her age,” Dr. Roberts says. “Very brave, too. Such a strong kid, diligent, hard-working, conscientious. Swimming, without a doubt, helped her in her recovery. Her back now is almost completely straight. She should be able to compete and do all she wants to do with swimming in high school and in college.”

The Janusz family spent Zuzanna’s two-week winter break in Florida in late December and early January. But don’t think for a millisecond that Zuzanna deemed the vacation as an ideal occasion to slow down and stay away from pools.

“Here’s all you need to know about how dedicated Zuzanna is to swimming,” says Jacob Weber, COHO’s head age-group coach and Janusz’s coach since she was 7. “Her family asked us to find a club in Florida that would allow her to train while she’s on vacation, and I know she was all for that kind of plan.”

Zuzanna recently asked him “Is there anything else I can do to swim faster or to get better?” He just looked at her and said “No. I can’t think of anything else; believe me, you’re doing everything possible.”

Janusz’s COHO cohorts, including Weber’s 12-year-old daughter, Claire, aren’t just her teammates; she considers them family. They consider Janusz the consummate role model—in and out of the chlorinated water.

“Zuzanna isn’t a rah-rah, look-at-me kid,” Jacob Weber says. “She doesn’t realize her COHO teammates have more reasons to look up to her in addition to her remarkable return to swimming after major surgery. They also look up to her because of her incredible work ethic and positive attitude. You’re not going to find many swimmers who are as competitive as she is, and you’re not going to find many teenagers who smile as often as she does.”

Back to that day in music class, as Zuzanna Janusz began to bend to tie her shoe …

“A girl sitting next to me noticed, and she bent down in front of me and tied it instead,” Janusz writes in her “Mountains and Medals” essay. “I smiled in gratitude, and she gave me a smile back, full of understanding.”

Janusz, some two years after surgery, wanted to volunteer regularly at hospitals, offering her support and ear for anybody about to undergo scoliosis surgery. But she was told she was too young to do so.

She would have to wait until she turned 16.

So the resolute 13-year-old wrote moving words in an essay instead. Dr. Roberts encourages his scoliosis patients to read it.

“If someone contacted me,” Janusz says, “and wanted advice from me about what to do after this kind of a surgery, I’d tell that person, ‘Don’t give up at any point in your rehab—that would be the worst thing.’ I’d also say, ‘Have faith you’ll get better. It’s worth it, this surgery; I feel a lot better.