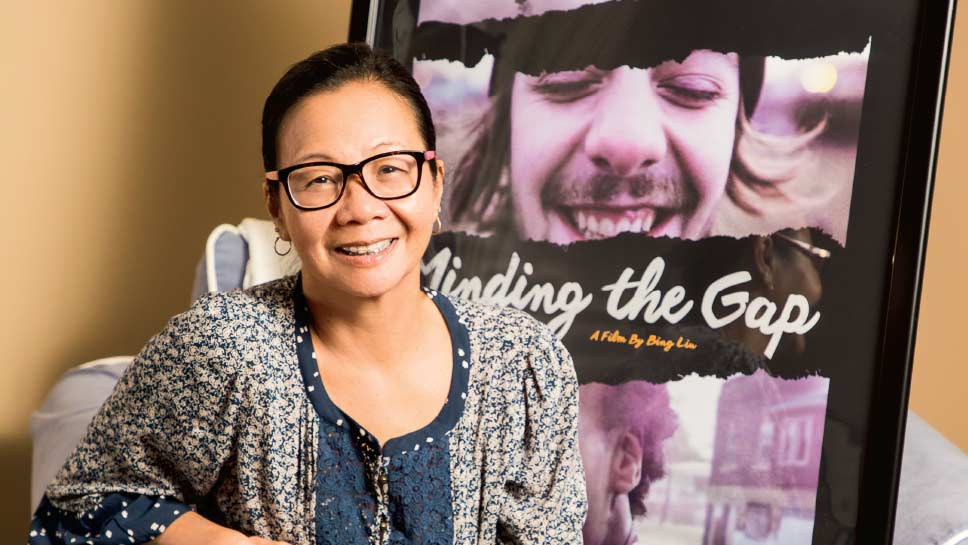 In 1996, Diane Quon was vice president of marketing at Paramount Pictures. Hollywood had been her life for 17 years—starting with four years at NBC after getting her master’s degree at the University of Southern California. But after experiencing health scares, she decided to choose a new direction.

“It was time to make a change,” she says.

She was a Chicago kid at heart, so when her husband, David, received a job opportunity in Chicago, she moved back to her hometown with David and their four children. They settled in Lake Forest, where she focused on raising her children.

But like all choices in life, the shift was complicated. She may have left Hollywood, but her love for film never quite left her.

In the last three years, Quon has been producing documentary films under the creative umbrella of the Chicago documentary collective, Kartemquin Films, known for its award-winning social justice films.

“If you’re going to spend years working on a film, and often not making much money, then you want to make films that make a difference,” she says.

Quon has one film currently in distribution and two more in post-production.

Her first feature length documentary—Minding The Gap—is a coming of age story about three skateboarders from Rockford, all escaping complicated families. Directed by first-time director Bing Liu, the film had its premiere in January at the Sundance Film Festival, where it received a Special Jury Award for Breakthrough Filmmaking.

“In the indie film world, screening at Sundance gives you unbelievable credibility and exposure. We felt so lucky to be there,” Quon says. Since Sundance, Minding the Gap has been picked up as a Hulu Original, screened at more than 100 festivals in the United States and throughout the world, had a short theatrical run in major markets, and will be broadcast on PBS in early 2019.

Quon’s professional and artistic quest has a clear path now, but the beginning of that trip was muddied and painful.

Nine years ago, Quon lost her son, Chris, when he was only 22. The pain of his death had left her nearly inconsolable. In 2014, a friend—who knew of Quon’s love of film—invited her and convinced her to attend Sundance. It was there that Quon fell in love with documentaries and saw the power of storytelling to make a difference. She went home determined to make a documentary.

Says daughter Sarah: “Knowing that life is far too short, my mother realized she did not want to live with any regrets. That’s what Chris would have wanted for all of us.”

With the support of David and her three daughters, Sarah, Rachel, and Kasey, Quon began to take some film classes and produced a short documentary. Soon after that, she started working on films at Kartemquin.

Looking ahead, Quon is taking on one of her biggest challenges in her re-launched career. She has optioned the film rights to the New York Times bestselling book, Hotel at the Corner of Bitter and Sweet, by author Jamie Ford. It’s another coming of age story—this time about innocent young love told against the backdrop of World War II and the domestic internment of Japanese Americans. Ford’s novel was released in 2009, spent 130 consecutive weeks on the New York Times bestseller list and has sold more than two million books worldwide. It still sells some 50,000 copies every year.

When taking on Hotel at the Corner of Bitter and Sweet, Quon vowed to honor Ford’s vision—that the roles of Chinese Americans and Japanese Americans be played by Asian actors.

“Growing up, it had always struck me that Asian Americans were rarely seen on the screen, especially in any leading roles,” Quon says. “I realized that you can sit back and be angry about it, or you can try to do something to change that.”

Quon is now on a mission with Hotel at the Corner of Bitter and Sweet.

“The book,” she says, “is such a wonderful reminder that no matter what background we come from, we share so many more similarities than differences. I want people to come out of the film appreciating a great, universal story—a story that anyone who has fallen in love will enjoy. I know making this film is not going to be easy, and it may not even happen, but at least I’ll know I had tried.”