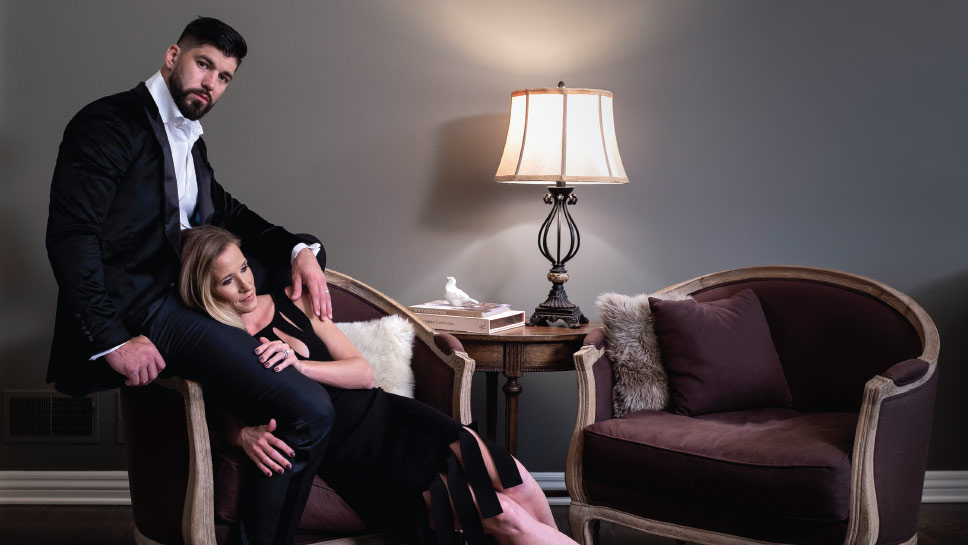 Forest & Bluff sits down with Chicago Bears tight end Zach Miller and his wife in nearby Lincolnshire as they share a story of love, pain, and triumph. PHOTOGRAPHY BY FRANK ISHMAN

Chicago Bears tight end Zach Miller and his wife, Kristen, share a chair in their living room in Lincolnshire. They are cuddling for a camera during a photo shoot, a straight-faced Zach looking down at a smiling Kristen. The camera clicks, clicks, clicks. The striking couple’s youngest child, 1-year-old Breckin, sits in a high chair about 10 feet away, pushing around—and occasionally eating—pieces of a snack strewn across the chair’s tray.

The tot grabs a journalist’s pen and twirls it, plays with it. The journalist places a legal pad of paper on the tray. Breckin then puts pen to paper and scribbles … something. A letter? A blob? Maybe, just maybe, the Millers’ little guy has what it takes to become a sportswriter someday and maybe, just maybe, interview the Bears’ first-round draft pick in 2041.

Zach and Kristen look away from the camera and right at Breckin, budding scribe. Both sport smiles now.

Nearly a year ago, on October 29, Kristen—at home and watching the Chicago Bears-New Orleans Saints game on TV with Breckin, Bella (now 8) and Kash (7)—wore a look of worry. Worry morphed rather quickly into anguish as her husband, after having landed in an end zone with an apparent touchdown reception, stayed down. For too long. Players and medical personnel surrounded the 6-foot-5, 240-pounder. Zach’s left knee, in essence, had exploded, resulting in a dislocation and a torn popliteal artery.

Had Miller been transported to the hospital with which the Saints had a contract, instead of one closer to the Mercedes-Benz Superdome, he would have had to undergo an entirely different initial operation. 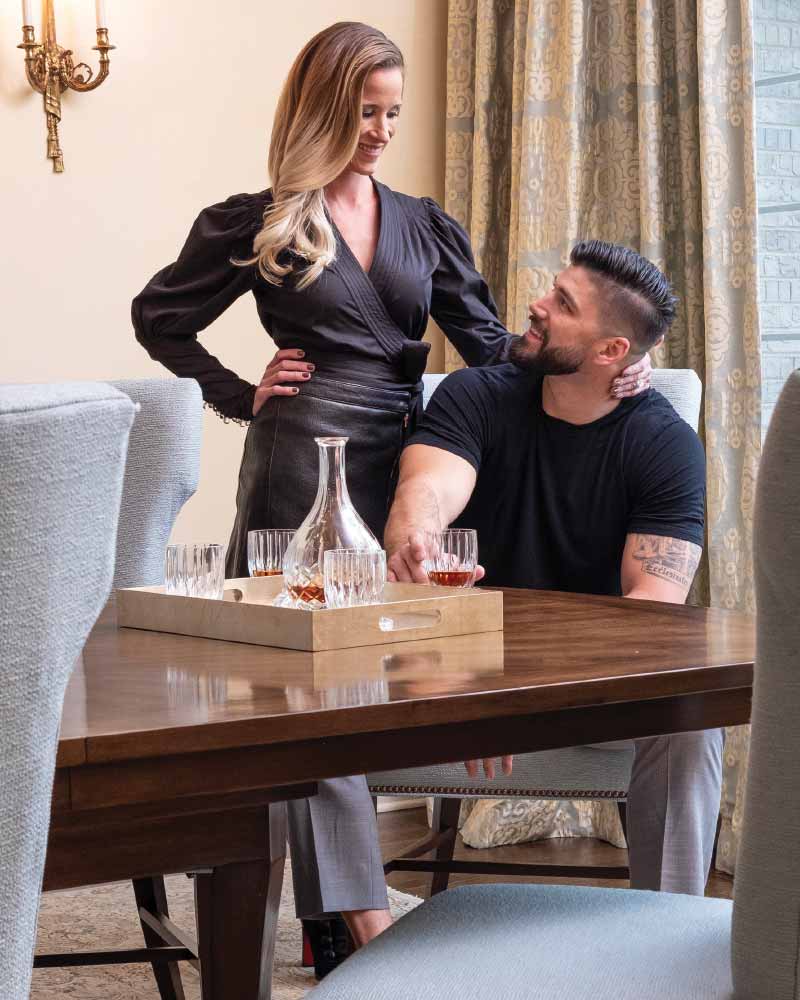 “They would have had to amputate my left leg,” says Miller, who has had nine surgeries on the knee. “It’s been a long process, but I’m feeling better. I’m at Halas Hall (Bears headquarters, in Lake Forest) all the time, going to meetings, working out, practicing with the team. The Bears organization has been incredibly supportive, unbelievable, since this injury. [Bears Chairman] George McCaskey and his wife, Barb, stayed in New Orleans to be with me for two days, flew to Chicago and then returned to New Orleans to spend more time with me.”

Miller had to spend three of the hardest weeks of his life in “The Big Easy.”

Kristen Miller had received periodic updates on Zach’s condition from Bears officials during the six-hour operation on Game Day. The last update was the best one: surgeons had saved Zach’s left leg.

“Hearing that made my midnight flight to New Orleans less stressful,” Kristen recalls.

What she heard from Zach, back when she was a sophomore at Bishop Neumann High School in Wahoo, Neb., and Zach was a freshman at the school: “Will you go to the homecoming dance with me?”

Kristen, who grew up on a farm and rode a Quarter horse named Jersey, said yes to a boy whose height (5-foot-7) was about the same as hers. They got super serious a couple of years later, when a 6-foot-3 Zach—the reigning state champion quarterback in Nebraska—asked her to be his steady on Christmas Eve and gave her an entire outfit for Christmas the next day. Kristen, a cross country and distance runner in track, gave the future star football player at the University of Nebraska-Omaha a pair of polo shirts.

Zach and Kristen were married for more than a year when the Jacksonville Jaguars selected him in the sixth round (180th pick overall) of the 2009 National Football League Draft. Miller had never entered an NFL stadium for a regular-season game, not even as a fan, until Jacksonville opened the ’09 campaign in Miami. A giddy, wide-eyed Miller, moments before the opening kickoff, approached Jaguars running back Maurice Jones-Drew along the team’s sideline and blurted, “We’re in Miami, about to play the Dolphins! Can you believe it? How great is this?”

Jones-Drew’s excitement level was a few notches below Miller’s. Jones-Drew, after all, had been in the league several years at the time.

Miller, the son of a truck driver (Buzz), played four seasons in Jacksonville before the Bears signed him in 2014. A foot injury shortened his ’14 and ’16 seasons. Football injures to both shoulders and a thumb, in addition to his right knee (in high school), had also sidelined him.

“Zach has never backed down after an injury,” the whip-smart Kristen, 34, says of her 33-year-old husband. “He’s always been determined, committed to fully rehabbing the injury. That’s his approach; he knows no other. It’s the way he’s wired.”

The photo shoot at the Miller home moves outside. Minutes later, a school bus stops, Bella pouring out of it and noticing her mother waving enthusiastically. Who needs a welcome mat with a human welcome like that?

The Millers live at their home in Omaha from January until mid- to late July, around the time Bears reunite and gear up for the start of training camp in Bourbonnais.

The Bears knew Miller’s devastating left knee injury would keep him from playing in 2018 but signed him to a one-year contract anyway, with a significant chunk of the salary guaranteed. Classy move. Miller—who spent 28 days at NorthShore University HealthSystem’s hospital in Evanston after returning from New Orleans last fall—still hopes to suit up for another NFL game someday. The easygoing, fun-loving, popular gridder oozes optimism, and working out and hanging out with current Chicago Bears fuels him. Some of Miller’s closest friends, still, are current or former NFL quarterbacks who threw passes to him, including former Bears signal callers Jay Cutler (“Cutty”, to Miller) and Brian Hoyer. In 2015 Miller caught an 87-yard touchdown pass from Cutler in the visiting Bears’ 37-13 defeat of the St. Louis Rams; it was the longest reception by a Bears tight end since 1999.

Zach and Kristen have attended Bears Care charitable events for years, as well as fundraisers for organizations tied to a Summer Olympics all-time great (Michael Phelps Foundation) and a world-class golfer (Jason Day’s Brighter Days Foundation). Zach, a saxophonist in high school, plays the piano and guitar. He attended the Luke Bryan concert at Wrigley Field with Kristen in early September. Twice at Wrigley Field he sang “Take Me Out to the Ball Game” during the seventh-inning stretch of a Cubs game.

If it’s a Monday night, Zach and Kristen go out—usually to a restaurant in the city.

It’s their “date night,” their favorite night of all.

“I still love to date my husband,” Kristen says.