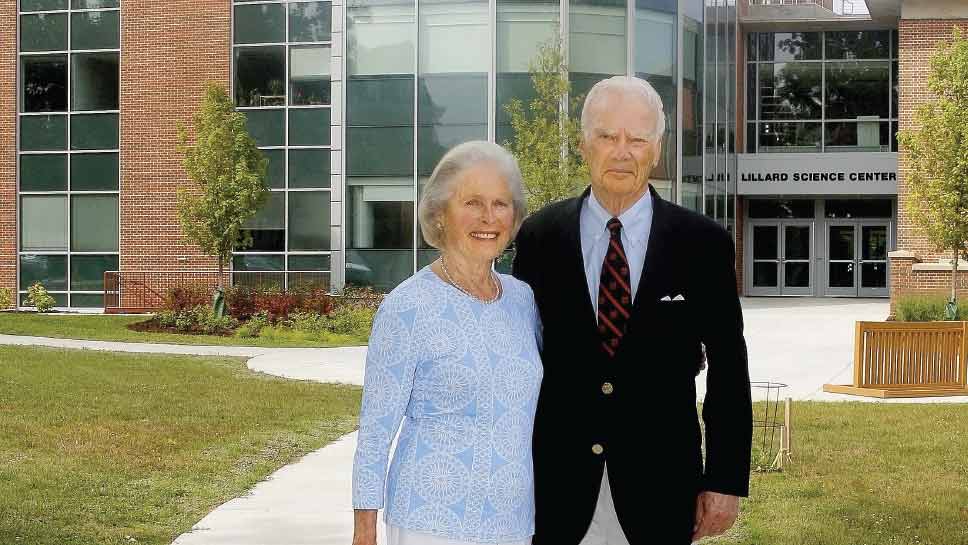 It’s been more than two years since Lake Forest College broke ground on the Lillard Science Center, the 130,000-square-foot research and teaching facility offering state-of-the-art classrooms and labs and areas for students to congregate and collaborate—a cornerstone of the interdisciplinary nature of the building.

This expanded facility makes it possible for the college to bring together the biology, chemistry, physics, and psychology departments with environmental studies, neuroscience, and new biochemistry and molecular biology programs. The new labs encourage student-led research and provide more opportunities for Lake Forest College students to work with faculty members on their research projects—something that is typically only found at the graduate-school level. More than 40 percent of the College’s current student population plan to major in the sciences.

“We knew this is how the tide was turning,” says John Lillard. “Students are choosing science majors because they know they will get jobs. Our world needs them.”

When it came time to name the building, Lake Forest College knew exactly who to ask—Lake Forest’s John and Paula Lillard. The Lillards had championed this project for more than a decade, knowing that the college would continue to thrive and excel with such an enhancement.

“Lake Forest College is best known as one of our nation’s leading liberal arts colleges, but a growing cadre of students are majoring in the sciences and the college needed this updated facility,” explains John. “We’re pleased to have had the opportunity to help finance the construction of these modern labs and classrooms and to see the enthusiasm of our professors and students who are using them so productively.”

“I’m really so proud of John,” says Paula Lillard beaming. “Behind the scenes, he helped creatively think about what this center could be. John knew intuitively what this new addition, coupled with its proximity to Chicago, could mean to the College today and beyond.”

Lake Forest residents for more than 50 years, John and Paula’s connection to the community is deeply rooted in Lake Forest Open Lands and Forest Bluff School (a Montessori educator) respectively.

When the Lillards settled into their home, Lake Forest Open Lands was in its infancy. Having come from a town outside of Cincinnati with a thriving land acquisition and preservation organization similar to Lake Forest Open Lands, John—his own property spanning 97 acres in the 1980s—knew how vital such a body could be to the community and joined

In addition to hiring Lake Forest Open Land’s first full-time employee and executive director, John was instrumental in creating the Middlefork Savanna, urging its preservation by the Lake County Forest Preserves (LCFP). He sold the county 36 acres of his own land and later placed an additional 15 acres adjacent to these parcels in conservation easement with Lake Forest Open Lands. These steps also encouraged Lake Forest Open Lands to purchase Middlefork Farm and create the Middlefork Farm Nature Preserve, ultimately spurring on the restoration of the Elawa Farm buildings and park. In all of these actions, John’s efforts have looked far into the future in the preservation and enjoyment of our local open spaces. “John really was a pioneer,” adds his wife

John’s understanding of land preservation was complemented by his wife Paula’s pursuit and advancement of the Montessori teaching model. Having a love for teaching, Paula had spent many years in the classroom, always with the dream of wanting to put Dr. Maria Montessori’s educational philosophy to the test. In 1982, Paula, her daughter Lynn Lillard Jessen, and Jane Linari co-founded Forest Bluff, a Montessori school located in Lake Bluff, which still successfully operates today.

“John and Paula Lillard have been remarkable supporters of the college for years,” says college president Steve Schutt. “They are both highly respected and long-serving members of our Board of Trustees, and they believe deeply in the value of the education we provide. John and Paula have been two of our most generous contributors over many years; their lead gift for the science center is simply the most recent of their contributions. It’s an honor for the college to name our new science center after them.”

The Lillards’ influence is palpable throughout the innovative learning center, with its interdisciplinary structures nestled among the preserved prairie on the college’s middle campus, even boasting of its own rooftop garden.

“Although I have professionally admired and respected John and Paula as college trustees for some time, I personally came to know them in 2006 when my daughter became a student for the next 10 years at Forest Bluff,” says Shubhik DebBurman, the Disque D. and Carol Gram Deane Professor of Biological Sciences and chair of Lake Forest College’s biology department.

“I’ve been stunned and impressed by their comprehensive grasp and deep appreciation for the impact of the liberal arts in undergraduate education, the central role of the sciences, and the unique strengths that colleges like ours provide best. I truly appreciate their genuine interest in the individualized education of our science majors and their constant advocacy and support. It came as no surprise to me when they were revealed as the lead benefactors of the new center.”