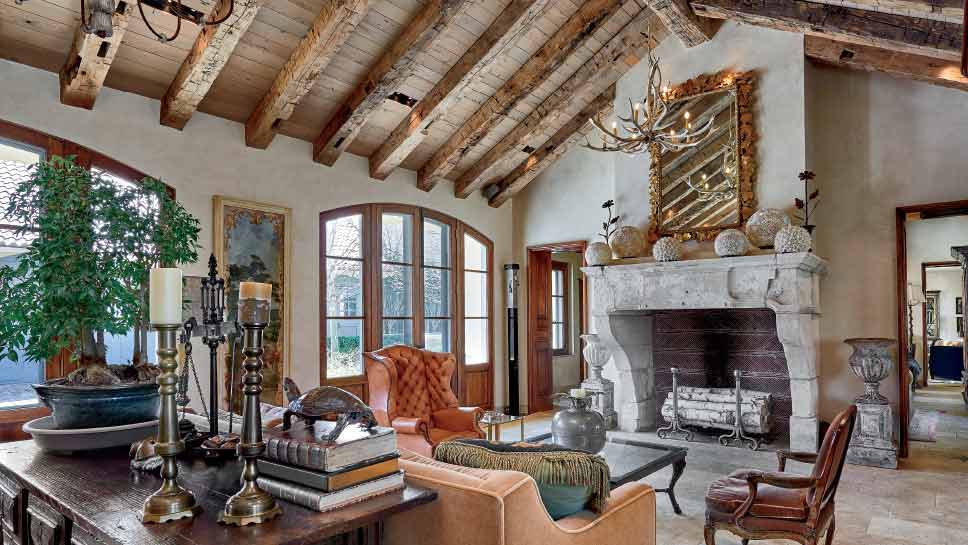 Outbuilding. Not a pretty word, and certainly not a place one is likely to call home—unless you and your architect can see the silk purse within the sow’s ear. Anyone who has visited Antiques on Old Plank Road in Chicago knows that owners Robin and Richard Buxbaum have an eye for the beautiful and exceptional. And Liederbach & Graham Architects is known for designing homes of historical richness and great livability. So, is it any wonder they were able to turn a couple of sheds in Lake Forest into a Provençal gem? 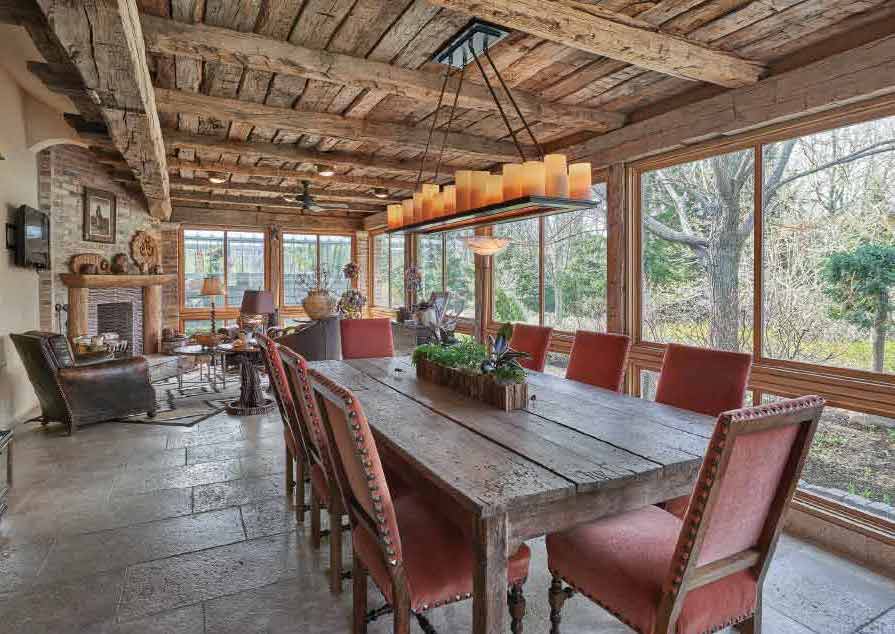 While it’s easy to identify many of the North Shore’s fine homes as the handiwork of architects David Adler, Arthur Heun, or Howard Van Doren Shaw, the history of the Buxbaum’s humble spread is more of a mystery. For starters, service buildings don’t usually warrant much attention, even when designed by a known architect. And in this case, time has done its bit in obscuring the past. 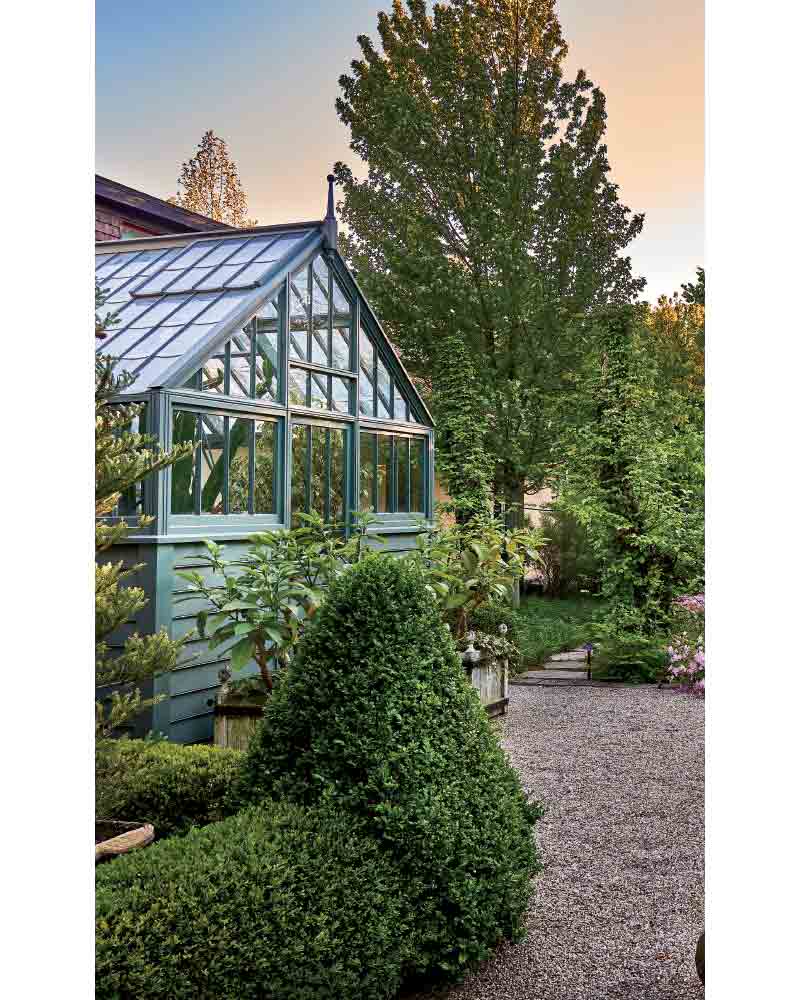 “We don’t know the architect,” says Michael Graham, “but stylistically, it recalls the Villa Turicum that once stood across the road. That was a Mediterranean-style home designed by Charles Platt for Harold McCormick and his wife Edith Rockefeller McCormick. It was probably one of the most splendid houses ever built in the suburbs of Chicago.”

The Buxbaum property was initially converted to a residence back in the 1960s. But it wasn’t much of conversion; the place was still more shed than house. “It was nasty,” recalls Graham. “So we did what we do, which is conjure our clients’ aspirations. In this case, that meant the south of France.” 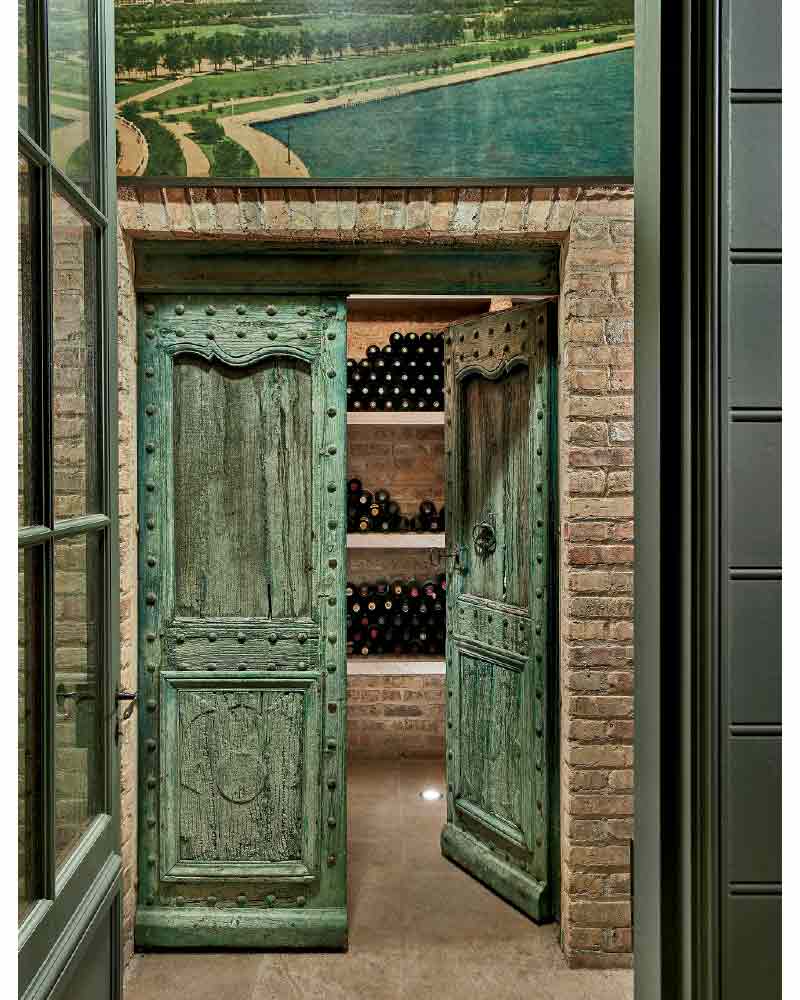 Although the building was pretty sound and the terra cotta roof tiles were still in good shape, just about every other aspect of the buildings needed some serious attention in order to give the place a French accent. Door and window openings were redone and framed with white oak and the existing flooring was removed and replaced with French limestone. The refreshed stucco walls were tinted with a pigment sourced at a Roman ocher mine in Rousillon, France and Graham removed a series of arches in what became the living/dining room, and installing an impressive series of reclaimed, hand-hewn oak beams.

The kitchen is especially expressive of the French flair the homeowners were after. Here, Graham fashioned a vaulted ceiling in red brick and had a craftsman carve a massive limestone sink that complements the volume of the space. “It’s typical of sinks you see in the south of France,” notes Graham. “I had it fabricated by the stone cutter who did the floor.” 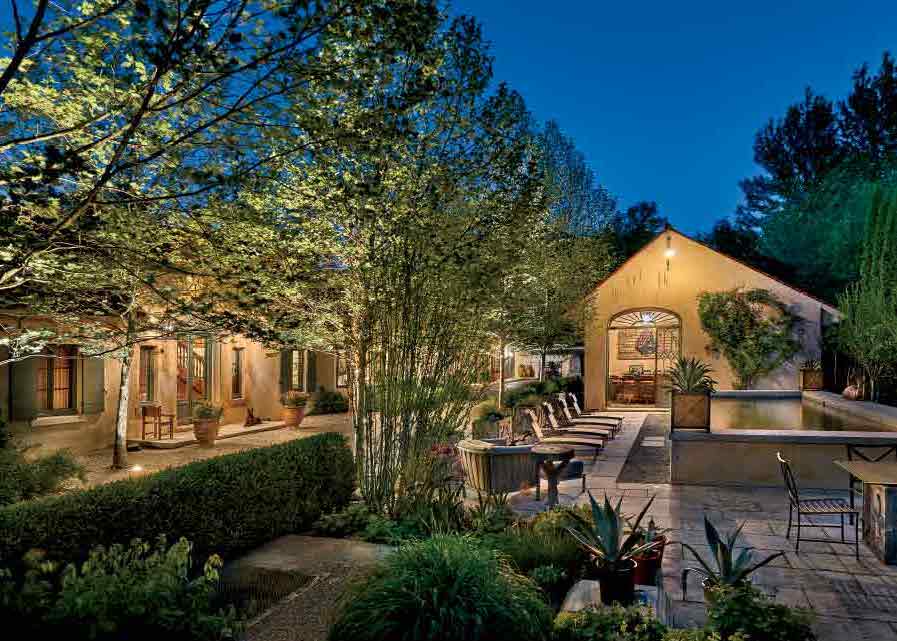 He designed appropriately rustic cabinets in rift white oak and created a striking island fashioned from an old patisserie table the Buxbaum’s had acquired before the renovation. Graham had it clad in enamel panels framed with brass (a look that echoes that of a classic La Cornu range) and topped it with slabs of Carrera marble. While Graham did keep to the footprint of the existing structures, he did add a greenhouse and a greatly appreciated enclosed porch with a salvaged timber ceiling.

Everywhere one turns in this wonderfully welcoming residence, there’s a detail to die for, from the hand-forged iron hardware to the finely carved newel posts of the 18th century stairway in the entry hall. The wine room is accessed through a pair of sturdy, fortress-like doors that came from a house in Avignon. In the commodious living room, Graham installed a mammoth, 17th century fireplace surround that he spotted in the Provençal stone yard of architectural conservationist Jean Chabaud. 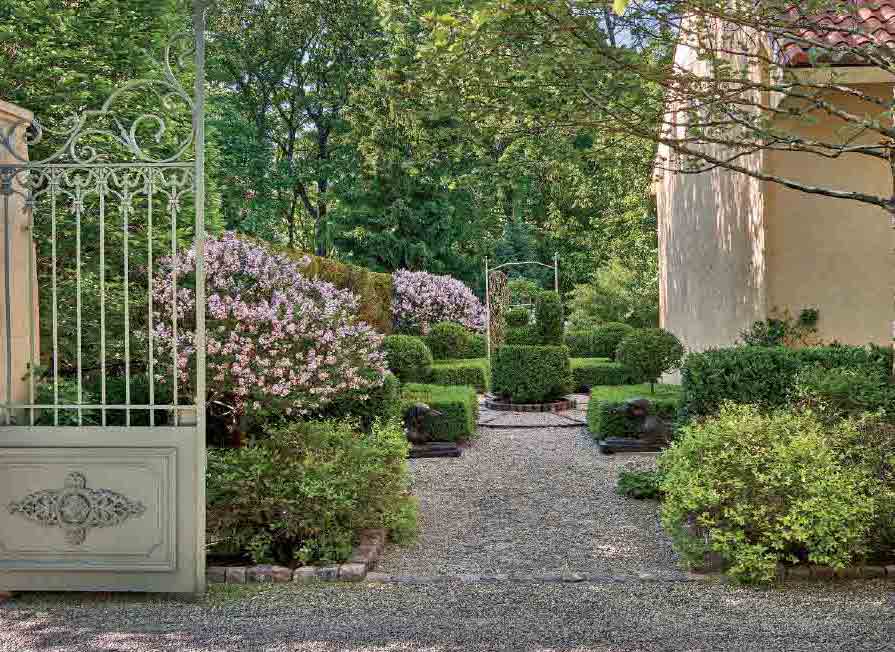 The two-year renovation afforded the Buxbaum’s the perfect container for their enviable collection of fine furnishings. The living room is graced with a pair of Napoleonic armchairs, Louis XIV Aubusson fauteuils, a walnut Louis XIII armoire, and a 19th century, carved Italian console. A 19th century tapestry hangs above the Louis Philippe buffet in the dining room. 19th century faience figures, antique pharmacy bottles, and Dutch still lifes adorn the kitchen. Even the three-bay garage, with its shiny red floor, gets apt detailing in the form of antique French automobile posters.

From an allee of sycamore trees to a symmetrical composition of tailored boxwood, to the seemingly natural gathering of plants along a meandering gravel path, the grounds of the Buxbaum home—orchestrated by renowned landscape designer Craig Bergmann—are an artful complement to the far-from-the-Midwest ambiance of the property.

Taking in the view of house and garden, there’s but one thing to utter: C’est si bon.