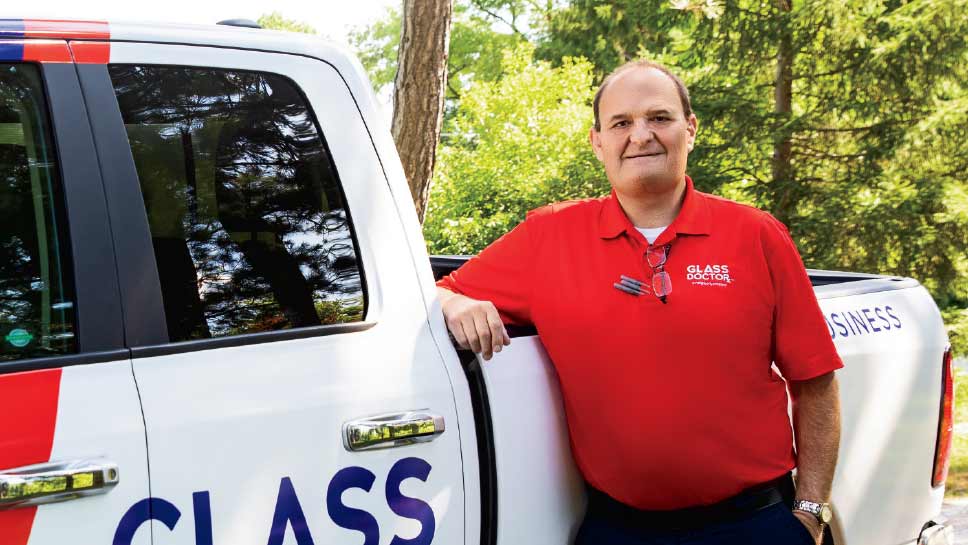 It was 2007, and Tony Morehouse had it all. He had the successful business and the fancy cars. He had the big boat and the massive house in Lake Forest. But the very next year, it was all gone.

Like so many who found their worlds upended by the economic downturn back in 2008, Morehouse not only persevered, but got stronger. Two years later, he lost over 90 pounds thanks to a newfound discipline when it came to food and exercise. And in 2015 after a stint in the cable business, he began a successful career as an account manager at a local company in the Chicago area.

Now, the lifelong Lake Forest resident says he feels like he has gotten a second chance thanks to his latest business venture as president of Glass Doctor of Grayslake.

“I have made mistakes in my past, but I feel like now I am ready to do everything the right way,” he says. “I have never felt better about the life that is now right in front of me.”

Serving customers throughout the northern suburbs, Morehouse and his team of professionals bring not only 30-plus years of glass repair experience, but also provide home and residential glass repair, including auto glass and glass window repair.

And yes, his love for sales has never faltered.

“No matter where I went, I would always be that guy with the top sales in the country,” he reflects. “I’ve always been the guy that works six days a week and 14 hours a day because I truly love what I do, and I love providing my customers with unsurpassed service that they just can’t find anywhere else.”

Some of that unsurpassed customer service includes something as simple as treating people with respect.

“Sometimes its as simple as being nice to people,” he says. “You call them back after they call you. You treat them how you would want to be treated. When you do something wrong, you make it right. And when they are in a jam, you want to be there to help them out of it.”

Leading him and helping him through the common trials of business ownership is his fellow Glass Doctor franchise owners across the country, many of whom have served as a mentor of sorts for Morehouse during this latest chapter of his life.

“I could have probably done all of this on my own, but why would I?” he asks aloud, referring to the $1.6 billion dollar Dwyer Group of companies that have a combined total of 100 years of experience. “There is so much we can learn from one another, including ongoing training for all business owners and a cross-pollination within businesses that you just can’t find anywhere else.”

“I like to work in the yard and go to church,” he says. “It’s all about recharging your batteries and feeding your body spiritually to make sure you can be the best person you can be.”

So will he ever retire?

“Oh no, I don’t see retirement in my future,” he laughs. “I’m not the type of guy who can just sit around. Selling and being around other people is my life.”