Five minutes in and you know Ally Sturm is going to be a tough interview. Not that she’s unpleasant or uncooperative; that isn’t the issue at all. It’s just that she won’t let you ask questions about her and her path to becoming one of the rising stars of the female sports broadcasting world. 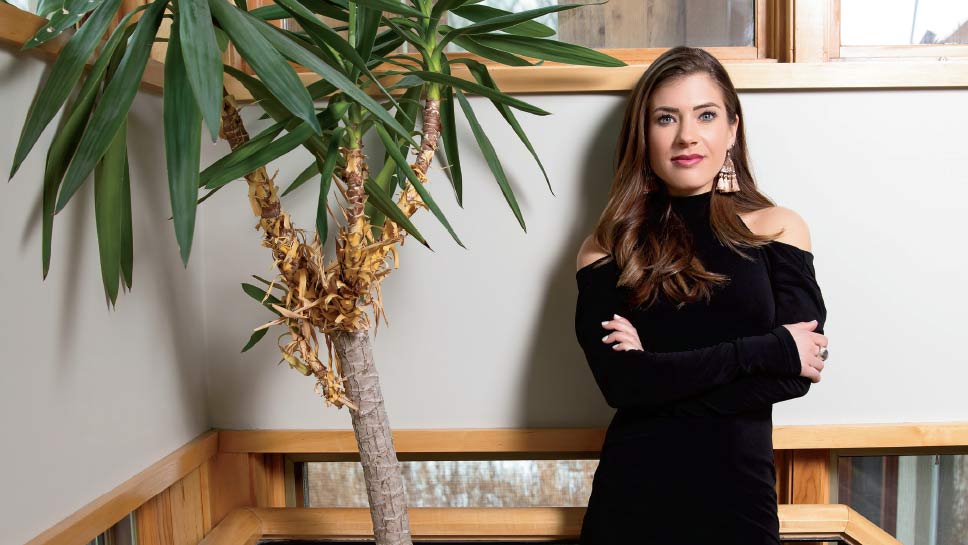 Lake Forest native Ally Sturm is taking the sports broadcasting world by storm as the sideline reporter for the Denver Nuggets NBA franchise and the Colorado Rapids MLS soccer team. We caught up with her earlier this year on a visit to her hometown. PHOTOGRAPHY BY ROBIN SUBAR

She’s too busy asking you about your life story.

“I was definitely somebody who always liked to be talking to people and learning their stories, probably to a fault, when I should have been learning math,” she jokes, sitting in the sunny kitchen of her family’s Lake Forest home. “I would always ask why, which was probably infuriating to the teachers. But I was very inquisitive, always wanting to try and understand.”

Sturm credits her Montessori education at Forest Bluff School for her inquiring nature and openness to see a situation from all angles.

“Between that and growing up with exchange students, it made me realize how amazing where I live can be, but also how much of a bubble it is,” she says. “My childhood growing up in Lake Forest made me realize that it’s a big world out there and I wanted to experience it all.”

And that’s exactly what she has done, turning her love of finding (and telling) other people’s stories into a career as a sports broadcaster. After in-game hosting for the Colorado Rockies, Colorado Rapids, and Colorado Mammoths as well as the ESPN X-games, Ally joined Fox Sports San Diego as the host of Padres POV, filling in as the sideline reporter for the MLB team from 2015–2016. Currently, Ally reports for the Denver Nuggets and Colorado Rapids full-time, covering both home and away games on Altitude TV. She also hosts the in-studio Air Force Falcons Report.

How did she get there? Let’s just say it was a long and only slightly winding road.

After leaving Forest Bluff School, Sturm opted to go to Carmel Catholic High School in Mundelein, a deliberate choice to meet new people outside of her social circle. “I had a lot of friends who lived in Lake Forest and loved it but I knew if I went to Lake Forest High School, it would be the same people. I was interested in trying something different and seeing if I would like it.” 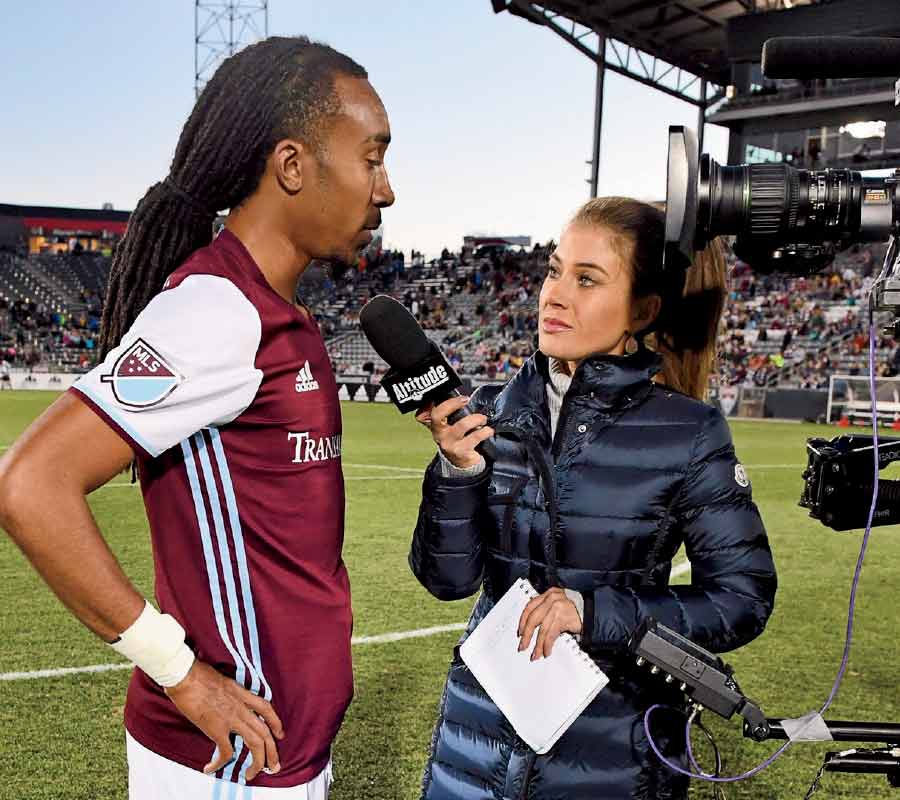 At Carmel, she began running varsity cross country to stay in shape for soccer, but the running soon moved to the top of her list—to the point where her coach once came to her father in the pickup line and said, “Did you know your daughter could run?” In the end, she was recruited to Pepperdine University, where she studied broadcast journalism and ran cross country during her freshman year.

“I always knew I wanted to be in communications of some kind, given my personality,” says Sturm. “We had a little studio at Pepperdine called The Wave. I did broadcasting there and did two internships from a very young age.”

She was also elected to be president of her Kappa Kappa Gamma sorority, a turn of events that she still finds to be “comical.” “I’m the least likely for the job,” Sturm laughs, adding: “I was involved in so many things, I was surprised that they chose me.”

While Sturm is the first to admit that she was never “a sorority person,” she did leave her mark on her time there, instituting the Kappagram—a new tradition of having sorority sisters write a personal letter to someone to thank them for doing something positive. After graduation, she took jobs babysitting and tried to get her first break in broadcasting. She even got her real estate license for a while, following in the footsteps of real estate executive and entrepreneur mom Gail Sturm.

One of her big breaks came when one of the player’s wives, a former sports broadcaster, offered to introduce her to an executive producer. She auditioned, got the fill-in reporter job for the San Diego Padres, and the rest is history. 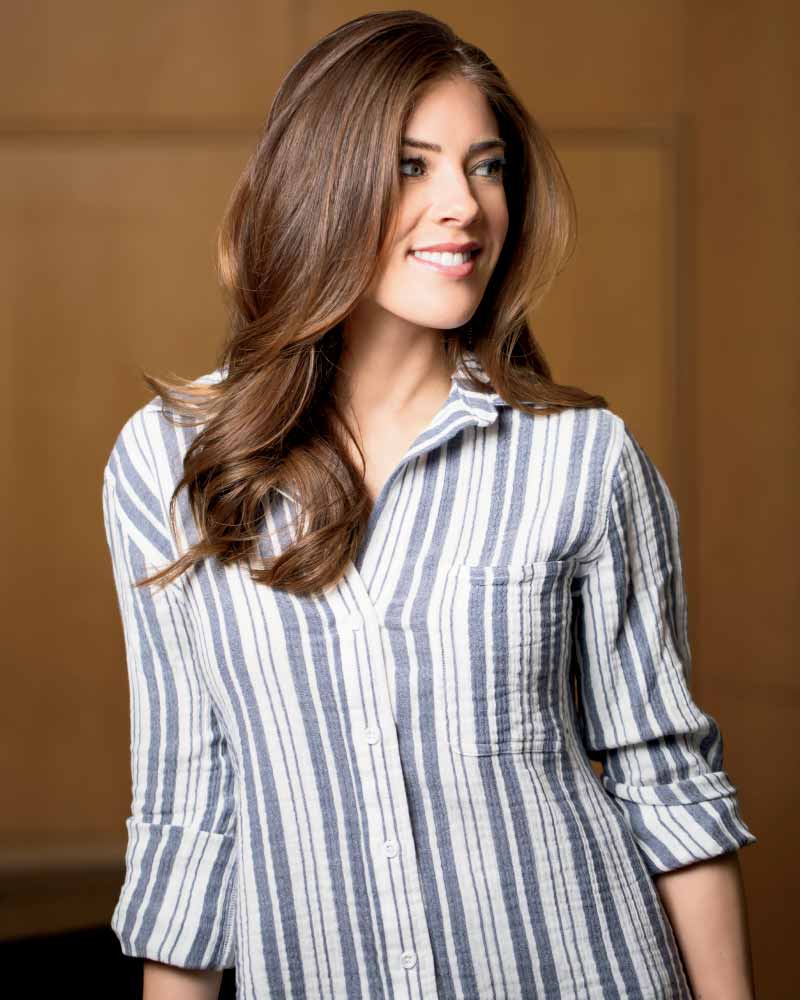 “I travel full-time with the NBA team, I sideline the MLS team, and I love it. I’m still very much the rookie in the business but I’m growing,” she says. “There are a lot of women who I’ve looked up to and some of them I’m working with, which is surreal. There are even certain times where we’re covering the same game, which is crazy. But I think when you get to a certain level, in the network of women reporters, you just have so much respect for anyone who got there.”

In addition to working on her career, Sturm travels as much as possible, continuing a love of exploring other cultures that was started when her parents began hosting foreign exchange students. At age 28, she has lived in both Rio Cuarto, Argentina, and Heidelberg, Germany for six-month spans. She has backpacked through Europe and has surfed the Gold Coast and now hikes the nearby Rocky Mountains whenever she can.

She is thrilled with her life so far, and expresses gratitude to her parents and the upbringing she had in Lake Forest. Sturm also always has a higher goal in mind, one that goes beyond career aspirations.

“I try to be the best person I can be, and be the kind of person that a young woman can look up to and respect,” adds Sturm, who was awarded a Heartland Emmy Award from The National Academy of Television Arts & Sciences for her reporting, just as we were going to press. “Broadcasting is not an easy job and it’s not an easy path, but it’s very rewarding. Once you realize you’re doing it because you love it, just forget about all the pressure and do the best you can.”

Wise words for such a young woman but you may not have time to compliment her. Knowing Ally, soon, it will be your turn to answer a question.