Looking out over their private beach, and a splintery boat pier that was grandfathered in more than a century ago, Janet and Paul Burt feel the weight of their Lake Road address and what it means to them, and their city. Built in 1908 for Donald R. McLennan, president of Marsh and McLennan Insurance Brokers, the 20-room Howard Van Doren Shaw mansion was meant to evoke all the glamour of a European villa.

The McLennans named their grand estate Stornaway, after a small town on the western coast of Scotland, and accoutered it with all the elegant details that might be found in Europe—from rich wood paneling in the library to carved mantelpieces, crown moldings, and a curved staircase. It had been renovated a few times by the time the Burt family purchased it from Bill Wrigley Jr. in 2011, and the original five-acre plat had been reduced over time, but there will still something rather poignant about the role they had taken in the home’s impressive pedigree. 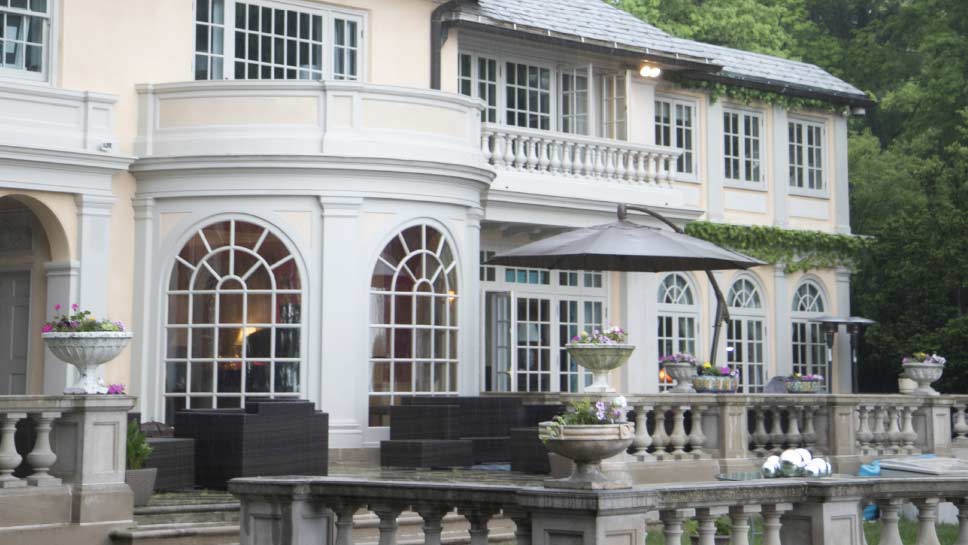 When Janet and Paul Burt purchased their iconic Howard Van Doren Shaw mansion from Bill Wrigley Jr. in 2011, they weren’t just buying a house. They were etching their family’s name into the history of a Lake Forest landmark that carries more than a century of stories. PHOTOGRAPHY BY APRIL GRAVES 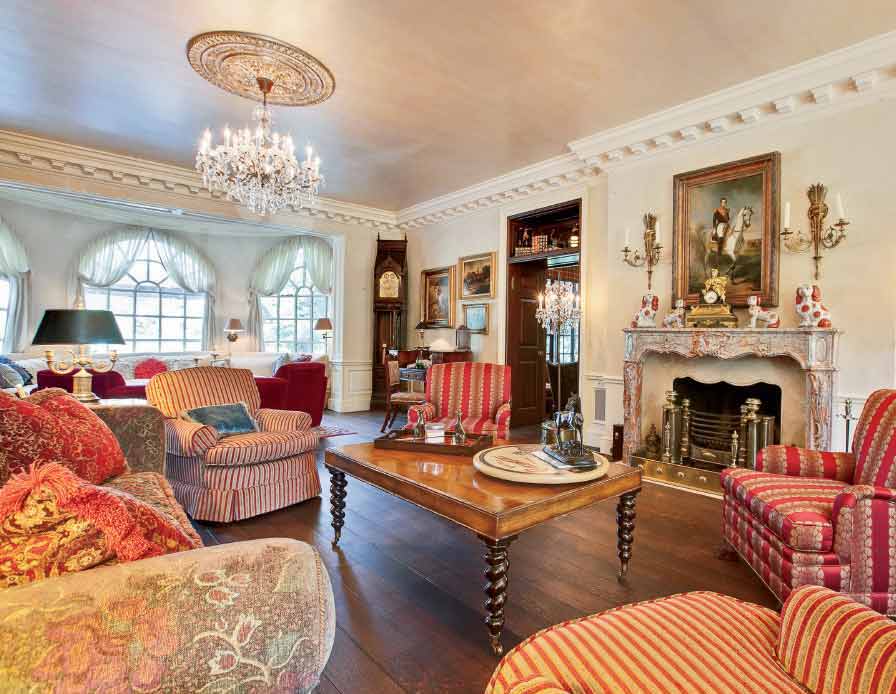 The sun-drenched living room includes one of many original carved mantelpieces and an abundance of crown molding.

“Our home stands proudly through the changes it has seen and as Paul has said often said, we are just a caretaker in this magnificent piece of history,” says Janet, explaining that the family has long had an affinity for historic properties. “I believe that each home is a story, a movie … a snapshot in time. Our last two homes in Lake Forest have been historically significant properties but we loved this house on Lake Road because of its iconic architect, the private beach, pool, family space, and private pier. Our basement has a theater and a salt water fish tank, and the view is amazing every day of the year.”

Stepping into the home on a recent weekday was like stepping back into time. While some modifications have been made, the rich wood paneling and mantelpieces are fully intact, lending an air of a European manor. From the graceful foyer, the view out over the pool to Lake Michigan is nothing short of spectacular. Imagine Cap d’Antibes in spring, gazing out over the Mediterranean.

“I see the most beautiful sunrises every day, and the beach sky glowing off the lake at sunset is gorgeous,” says Janet, who cherishes the villa-style terrace and outdoor space so much she strongly encourages daughter Sophia and son Hudson to do their homework outside. Because, after all, this is a family house—12-car underground garage and all. 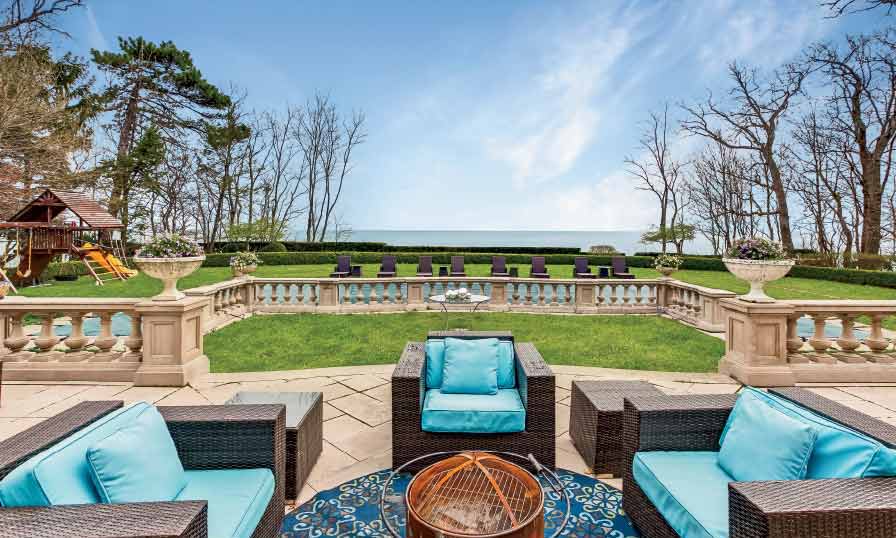 A view out over the pool to Lake Michigan from this historic home is one example of its European villa-inspired architecture.

“Regardless of whether this property was built as a summer vacation home for a wealthy man, or if it was built as a landmark by a famous architect and landscape designer, we are still a 21st century family living here with dogs and cats running amok—and homework to be done,” she says. “I want to make happy memories for my children of the great times we had here as a family … running around with cousins on Christmas morning, riding bikes in the house on the first floor, having Nerf gun wars, or finding eggs around the house on Easter. This property is also awesome for hide and go seek.”

Janet says she also wanted to pass down some beloved family traditions. When she was growing up, her parents always had a puzzle in the dining room—a group project everyone could participate in. Her version of that is a LEGO village, lovingly constructed over months and situated prominently in the center of the dining room table. 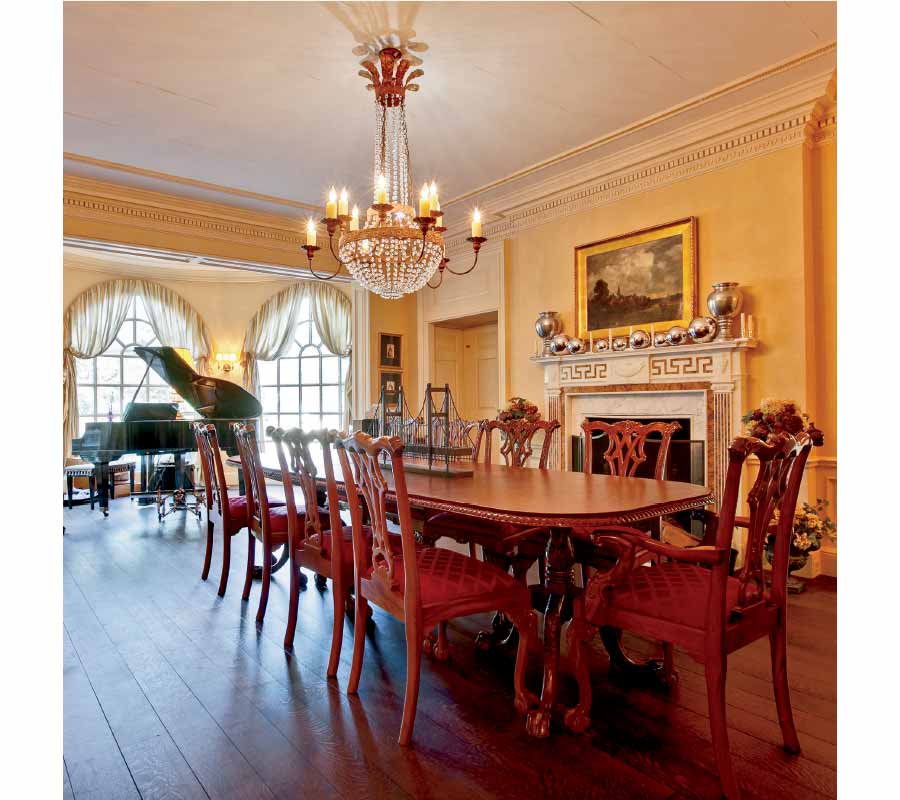 The dining room at the Burt house often includes a LEGO project in the center of the table, reflecting the couple’s family-focused lifestyle.

“To me, that represents that this is a family home and not as uptight as other homes of its stature,” she explains, adding that the family especially enjoys the private beach and boat pier. “The most giggling was probably when we took our children and their cousins tubing after we docked our boat at our pier. We have had bonfires with fireworks at the beach, and a beach birthday party with buried treasures in the sand. We have tried fishing, and most recently a kayak. We are blessed to have this right in our backyard.”

While times have changed since the home was built more than a century ago and the spaces are now enjoyed in different ways, the Burt family believes that part of being a caretaker of the property is sharing it with others in the community

“This house was built to entertain and be enjoyed,” she says. “We have had many casual barbecues with Tiki torches at the beach, swim birthday parties with families, and many large formal holiday parties. We have also hosted many fundraisers here. The more sand, or feet, in the foyer the better.”

The Burt home has been featured on the Woodlands Academy Winter Wonderwalk and several similar events that aim to raise money for local nonprofit organizations. Janet says she especially enjoys the holiday house walks because she loves sharing the magic of Christmas on a larger scale.

“I am lucky to have a huge closet of Christmas decorations, many of which were given to me by my parents and grandparents,” she says. “Last year for the Woodlands Academy house tour, it was exciting to have my home completely decorated by early November, which left time for teacher gifts and making my mom’s favorite fudge recipe the rest of the season.” 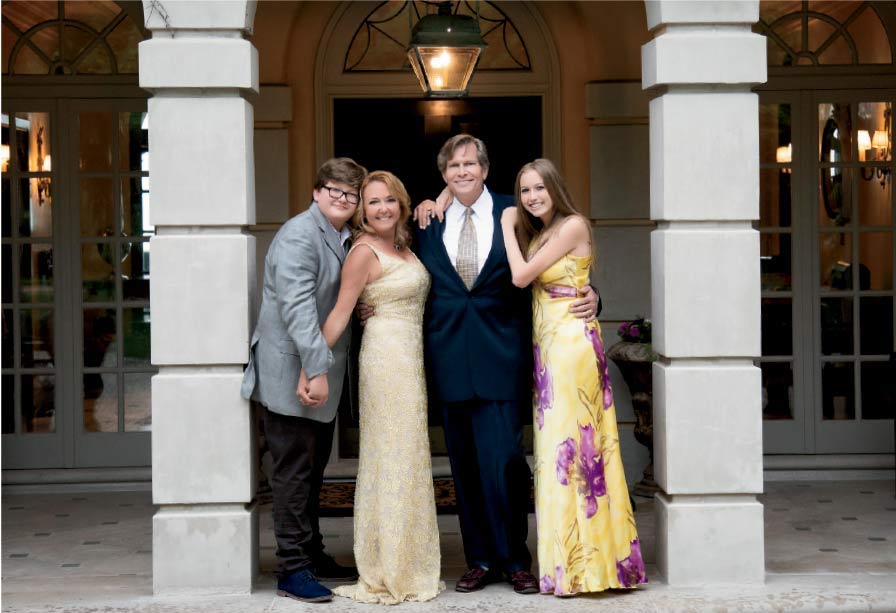 Hudson, Janet, Paul, and Sophia Burt are shown in the home’s majestic entryway.

Set on 3.7 acres (which is smaller than the original size of nearly five acres) the seven-bedroom, 11-bathroom (seven full and four half) home is an architectural masterpiece that has been adapted for modern-day living. While Paul might say the underground garage and man cave are his favorite parts of the property, Janet has her own preferences.

“I would have to say my favorite spot is the back terrace in the summertime. We spend as much time outside in the summer as possible,” she says.

“In the winter, I love the cozy feeling of the library. It was originally built to be a sleeping porch but now is a warm, fireplace room perfect for a movie, or snuggling up with a good book and a Great Dane.”

While the Burt family has enjoyed living in this home all these years, they did recently put it on the market for $6,999,999. However, Janet says she hopes they can hang on to it just a little bit longer, and continuing taking care of a Lake Forest icon.

“To be honest, we will be very sad if the house sells,” she adds. “Lake Forest is an amazing place to raise a family. We have wonderful friends, amazing schools, and a beautiful and safe place to live. Sophia and Hudson are both happy in school so I can’t imagine leaving before they graduate. However, it might be time to pass this house along to the next family to love it as much as we have.”

This iconic home at 1345 Lake Road in Lake Forest is currently available at $6,999,999 through KoenigRubloff Realty Group. For more information or to make an appointment, contact Ann Lyon at 847-828-999, Jeanne Martini 847-909-8085 or visit lyonmartini.koenigrubloff.com.