The year was 1952. A young James A. Lovell Jr. graduated from the United States Naval Academy at 11 a.m., and then married his high school sweetheart Marilyn Gerlach at 2 p.m. on the same day. Soon after, as the newlyweds were driving from Illinois to Milwaukee to attend their wedding reception, they happened to stop at the Walgreen’s soda fountain counter in Lake Forest for lunch, then wound their way north on bucolic Green Bay Road, and fell in love with the beauty of our town. It would be nearly three decades later when the opportunity presented itself to move to the Chicago area; and they immediately focused their search for a new home in Lake Forest, moving to the Villa Turicum subdivision in 1981.

But first, there would be Lovell’s very important years as an astronaut (he was selected by NASA in 1962), Gemini and Apollo missions, four children and family life in Houston; not to mention that fateful date in 1970 now immortalized by the words, “Houston, we have a problem,” spoken by Captain James Lovell and later, actor Tom Hanks in the blockbuster hit movie, Apollo 13. 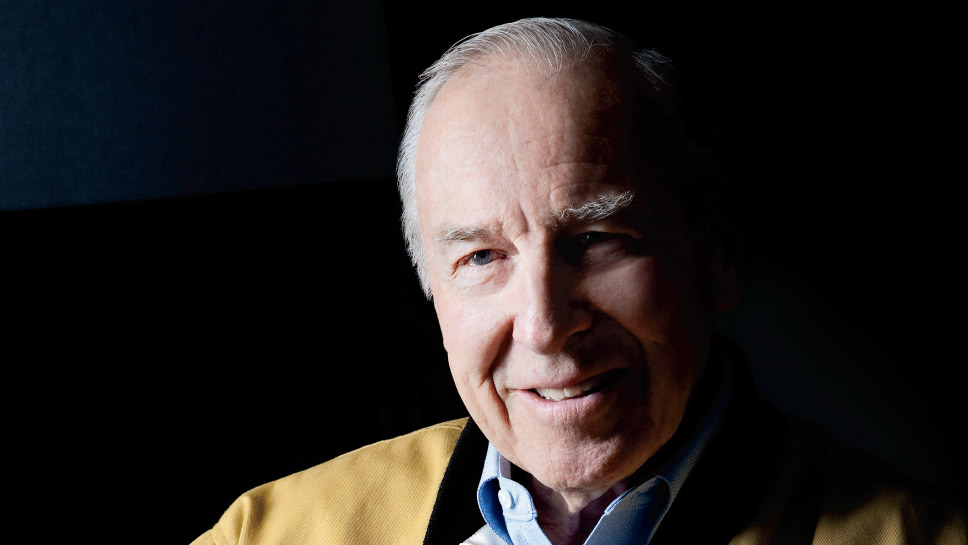 Captain James Lovell speaks about his life and legacy in what happens to be a milestone year for the beloved Lake Forest icon. PHOTOGRAPHY BY HELEN BERKUN

Captain Lovell turned 90 in March, and 2018 also marks 50 years since the Apollo 8 mission. Lovell served as navigator for man’s maiden voyage to the moon in December 1968 on Apollo 8, which was the first manned spacecraft to be lifted into near-earth orbit by a 7½ million pound thrust Saturn V launch vehicle. Lovell, with follow crewmen, Frank Borman and William A. Anders, were simultaneously propelled into history as the first humans to leave the earth’s gravitational force.

To celebrate that pivotal achievement in American’s daring exploration of space, The Women’s Board of the Adler Planetarium will honor Captain Lovell at its Celestial Ball black tie fundraiser on September 8. As part of this, it recently launched a “Letters to Lovell” campaign, inviting the public to write notes directly to Lovell to say thank you and express how his story has encouraged them to pursue their dreams.

“This [Apollo 8] is a story in itself,” says a distinguished Lovell, wearing a button down Burberry shirt, cardigan sweater, and horn-rimmed glasses, over coffee at Jay Lovell’s (his son Jay’s casual eatery) in Highwood. “A story of boldness, adventure, and exploration—much like the Lewis and Clark Expedition—and the quest to beat the Russians.” He recalls, of the unforgettable moments as navigator of Apollo 8, leaving the Earth’s orbit: “The earth still had us; we were still attached. And then as we left the sphere of influence, instead of slowing down, we started to speed up towards the moon.” While Apollo 8 occupies a significant place in history, it is the Apollo 13 mission that comes to mind first when we hear the name Captain James Lovell.

He is now referring to the Apollo 13 mission, which could have cost him his life had it not been for the resourcefulness and ingenuity of the team at Mission Control working with the three astronauts—James A. Lovell, John L. Swigert, and Fred W. Haise—aboard. At the time leading up to the Apollo launch, though, Lovell says that Americans had gotten complacent about the space program.

“This was an accident that happened at the right time at the right place,” he explains. “We were becoming very confident with the Apollo program, so much so that the launch of Apollo 13 was buried on page 78 of The New York Times. We launched with little fanfare. But it was a flight that was plagued by bad omens and bad luck.”

With its “unlucky” number, Apollo 13 took off on April 13 at 13:13 CST. Four days before the flight, the entire crew was indirectly exposed to rubella. “We had to replace Mattingly with Swigert,” says Lovell. But since Lovell and Haise had already had rubella as children, they were able to go. Still, in retrospect, Lovell now sees this as yet another bad omen so close to the launch. Finally, while no one predicted that it would be a problem at the time, one of the oxygen tanks had been dropped on the factory floor just as it was to be delivered. The tank passed inspection, but it would be the very same Service Module cryogenic oxygen system that was undetected during a routine test and set in motion the crew’s harrowing journey home. Of course, by now we know that Apollo 13 returned to earth safely. The positive outcome, according to Lovell:

“It brought the space program back to a new level. It demonstrated what people could do with good leadership, initiative, and problem solving skills. My ongoing contribution was to make the populace aware of the significance of our program to overcome odds.”

Lovell took his self-imposed mission seriously, carrying it with him beyond his days as an astronaut (he retired from the Navy and the space program in1973) all the way through present day. After his retirement from NASA, Lovell went into the business world. He would go on to hold positions as president and CEO of Bay-Houston Towing Company; president of Fisk Telephone Systems, Inc.; and ultimately as executive vice president of Centel Corporation (the position that brought him to Lake Forest) before retiring a second time in 1991. 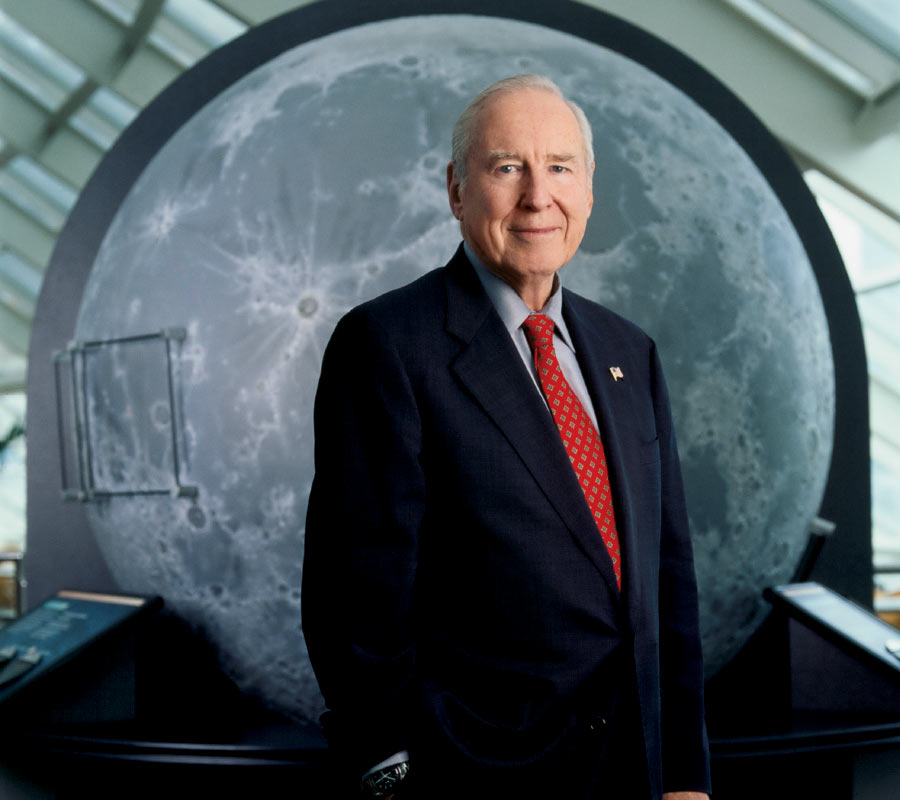 Life in Lake Forest included seeing his youngest son Jeff graduate from Lake Forest High School and his other children begin their careers, marry, and start their own families. In 1997, his family built and opened Lovell’s of Lake Forest, a family owned and operated fine dining destination that endured through 2015. In the downstairs Captains Quarters, many a guest marveled over the floor-to-ceiling glass enclosed display case that occupied one full wall of the cozy pub area and housed some of Lovell’s iconic NASA memorabilia—part of the heat shield from a spacecraft, manuals used by astronauts aboard the flights, and letters he received from friends and luminaries after Apollo 13’s safe return. The huge astronaut mural that greeted guests as they entered the restaurant was a personal gift to Lovell from friends Tom Hanks and his wife Rita Wilson; it now hangs in the Captain James A. Lovell Health Care Center, which opened in 2010 and is named in honor of the former astronaut.

It seems that his indelible persona as Captain James A. Lovell remained the common thread on his journey through life. When he retired from business, Lovell reinvented himself yet again. He co-authored (with journalist Jeffrey Kluger) the book Lost Moon: The Perilous Journey of Apollo 13, released in 1994. The film, Apollo 13, was based on the book and released in 1995. Lovell also went on the speaker circuit to talk to audiences about Apollo 13. It seemed people couldn’t get enough of hearing from Captain Lovell about that fateful journey in 1970 to the moon and back.

“I sent my grandchildren through college on those speaking gigs,” Lovell adds. He and Marilyn, wife of 66 years, currently count 11 grandchildren and 4 great grandchildren among their brood. After 18 years in their first Lake Forest home, they eventually moved to a house closer to town and the lakefront, where they still reside today.

Even after all this time, people young and old remain fascinated about America’s early and ongoing space odyssey, and the lasting impression Captain Lovell has made on their lives. His 90th birthday and the anniversary of Apollo 8 offer the perfect opportunity for anyone to express their sentiments through Adler’s “Letter to Lovell” campaign, which will serve as a lasting testament to Captain Lovell’s legacy and timelessness as a true American hero. Lovell is a lifetime trustee of the Planetarium, and has been part of the Adler family for many years. In 2005, he generously donated many of his personal memorabilia and artifacts from his storied career to Adler’s collection, affording guests a unique glimpse into the lives of those that took America’s first steps into space.

Captain Lovell has earned many awards and accolades over the years. Here are just a few: He held the record for time in space with a total of 715 hours and 5 minutes for many years, until surpassed by the Skylab flights. He received the Presidential Medal for Freedom in 1970; a NASA Distinguished Service Medal; City of Houston Medal for Valor in 1969; the Sam Houston Area Council 1976 Distinguished Eagle Scout Award; and finally, the Congressional Space Medal of Honor.

But, beyond being remembered for all of his accomplishments and the honors bestowed upon him, the now-nonagenarian James Lovell simply wants for his legacy to inspire people to look up, explore, and achieve the impossible.

“I’m a survivor. If we hadn’t gotten home safely from Apollo 13, I wouldn’t be here today. Life is full of risks every day and if you want to succeed, you need to take some risks, which is what I did, and what I recommend to others who have their own dreams and ambitions.”

For more information about the Celestial Ball, visit pjhchicago.com/event/adler. To participate in Letters to Lovell, send an email to [email protected]