The 7th annual Northwestern Medicine Lake Bluff Criterium & Block Party returns to the Village of Lake Bluff on Saturday, July 21. Marco Colbert, a retired racer himself, is the creator and race director for this fast-paced event.

“It’s somewhat noteworthy that we’re in our seventh year hosting this event in Lake Bluff,” says Colbert. “It’s become very popular and wouldn’t be so without the goodwill of our venue and our generous sponsors.” Northwestern Medicine is the headline sponsor and offering a first-class medical station for racers in the Lake Bluff Fire Station, Knauz Auto Park is providing the pace car, and Lake Forest Bank & Trust is sponsoring the kids race. 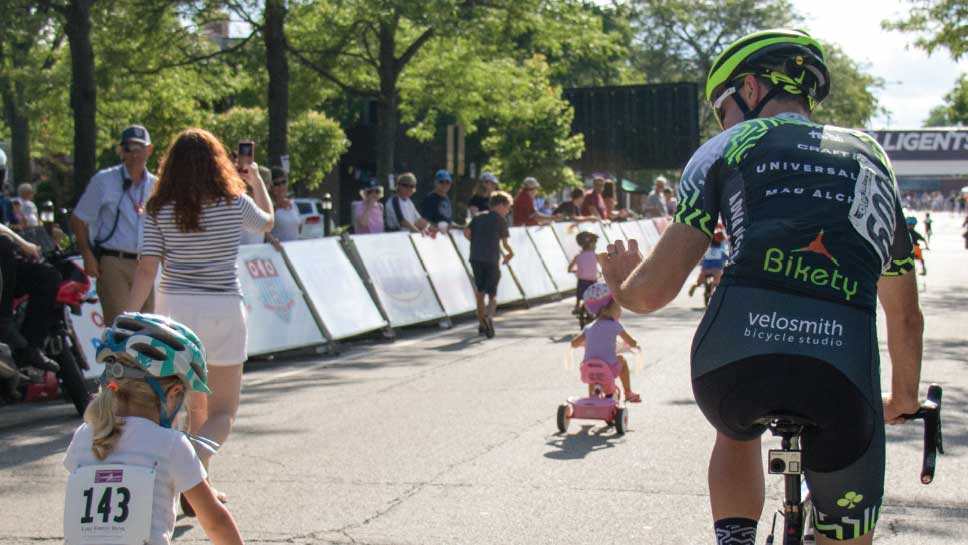 A criterium is a road race on a closed race course, usually one mile or less in circumference. The Northwestern Medicine Lake Bluff Criterium is part of the The Intelligentsia Cup that offers 10 days of continuous racing with seven criteriums and three road races, including the Illinois state road race championship. Racers from 12-15 foreign countries and more than 35 states are expected to compete in Lake Bluff this July.

“We have a real focus on our junior racers this year,” explains Colbert, referring to racers between the ages of 9-18. “We’re hoping they will compete in Lake Bluff before heading to the national championships in Maryland. They will be thrilling to watch—and they truly are the future of this sport.”

In addition to the professional racers and the juniors, new racing categories have been added including a hand-cycling race for people with physical disabilities and fixed gear races for bicycles with no brakes.

Colbert also says the planning committee hired bicycle stunt rider Chris Clark to put on a show for spectators. A Schwinn mountain bike will be given away as a tie-in to his performance.

Additionally, there will be lots of family fun at the Block Party on the Village Green, where spectators can view the racing action—either live, or from the Jumbotron screen­—and enjoy food from several local restaurants, libations, and live music. The Block Party runs from 4 to 11 p.m. with music starting at 8 p.m.

For Colbert, there is no slowing down in his passion for promoting this race. “I love cycling and want to give back to the sport that has given so much to me,” he says. “It’s a year-round labor of love but I wouldn’t have it any other way.”