Charles H. Walsh, a Lake Forest businessman who experienced a childhood in orphanages and went on to become a successful owner and partner in the Chicago Bulls and Chicago White Sox sports teams, died peacefully at home last month, surrounded by family members. 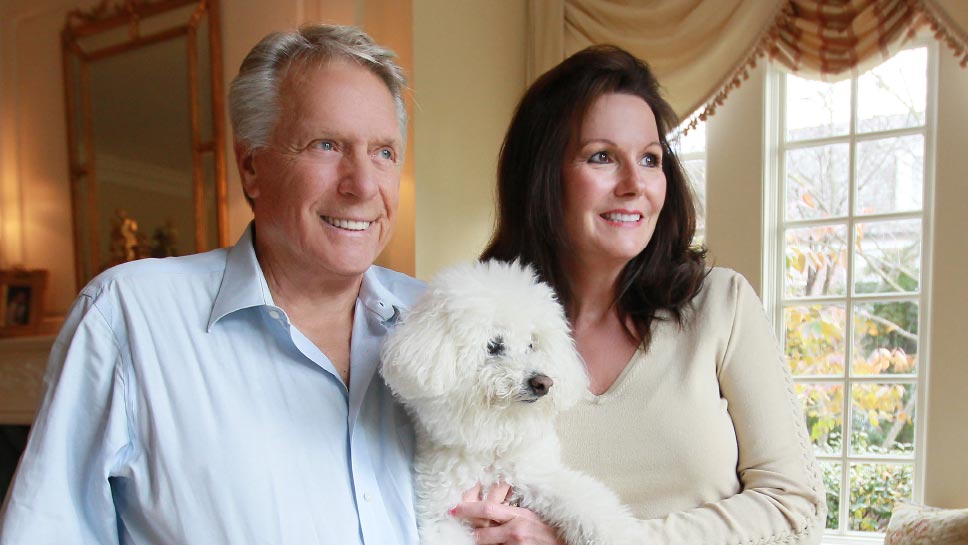 Family and friends honor Charles H. Walsh of Lake Forest, local businessman and partner in the Chicago Bulls and Chicago White Sox organization, who passed away on June 4. PHOTOGRAPHY BY J. GEIL

Raised in three orphanages for 11 of his first 17 years (the last being what is now known as Maryville Academy in Des Plaines), Walsh (also known as “Chuck”) described his childhood as a happy one, despite the challenges he faced. “All of the boys worked one-half day and went to school during the other half,” he told Forest & Bluff magazine in a June 2006 interview. “I started out as a baker’s assistant, worked on the dairy farm, and then worked in the campus shoe shop where I learned to make shoes.”

He went to work for Florsheim Shoes at age 17, with the intention of becoming a cobbler. “Instead I found myself working a buffing machine, shining the bottoms of shoes so that they would look good when someone opened the box,” he said. “That was a turning point for me. I decided that you couldn’t go any lower than the bottoms of shoes.”

His wife, Janie, said that experience never left her husband, who went on to continue supporting Maryville until the end. “He never forgot who he was and how he grew up,” she said. “Very few people were like him. He was so kind to everybody at every level of life. He had no airs. He was in circles where he ran into very wealthy and different businessmen but he would be just as kind to the doorman or someone sweeping the floor.”

Walsh’s path to higher education was unconventional but determined. He was admitted to DePaul University and tried to balance a full-time job with a full-time course load before deciding to finish his education on the G.I. Bill—first by joining the National Guard and then later enlisting in the Army. Walsh went off to Korea, where he attained the rank of Sergeant First Class, before returning home to pursue a bachelor’s degree in business administration at Northwestern University. 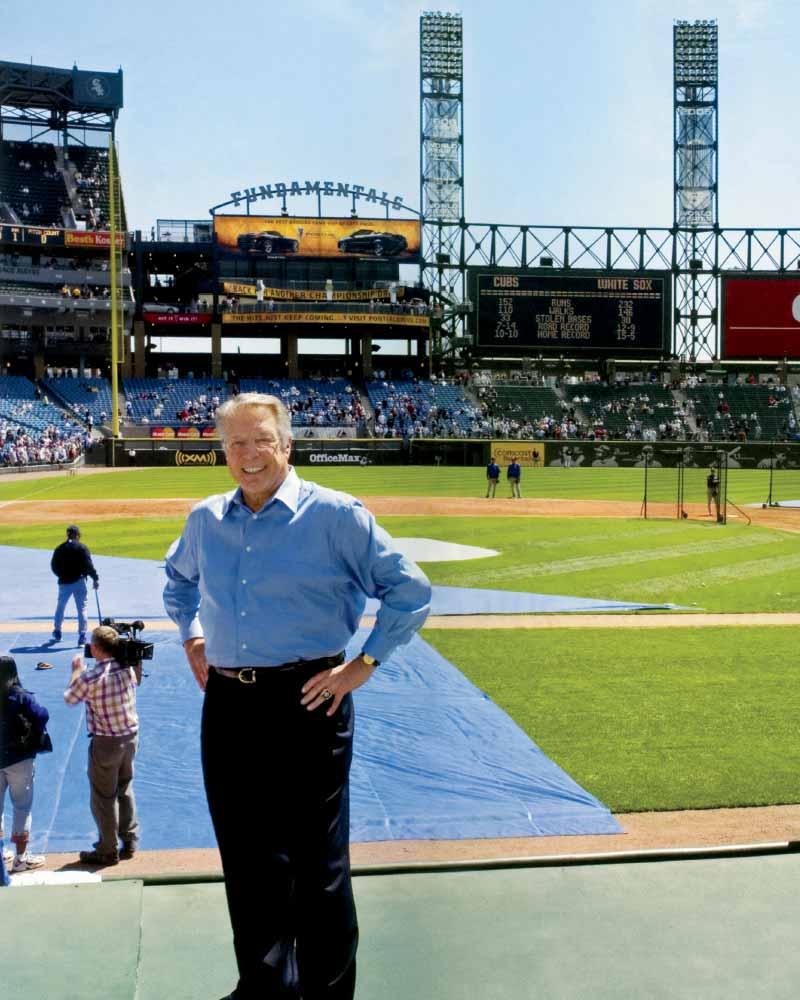 In 1962, shortly after graduation, he launched his first company—a management consulting company for physicians and dentists called Associated Professional Consultants Inc. It was the beginning of an era where doctors began thinking of their practices as businesses, and Walsh was on the cutting edge of the trend. As the author of Medical Practice Management Desk Book, a contributing editor of Medical Practice Management magazine, and president of the Society of Medical & Dental Management Consultants, his reputation in the field escalated.

It was around this time that he met a young attorney named Jerry Reinsdorf, who was also specializing in medical and dental practices. They found themselves “on the floors of Congress” in Washington, D.C. in the 1970s and became friends and business alliances. Reinsdorf would eventually veer off into real estate investing, with Walsh as a partner and investor. Then one day in 1981, Walsh got a call from Reinsdorf with an idea for buying the Chicago White Sox. “Mind you, we had no money, just guts and the belief that we could do it,” Walsh told Forest & Bluff in 2006. “And we did, raising enough capital for an unleveraged buyout.”

Contacted the day after Walsh passed away, Reinsdorf described his friend and business partner as a man of high honor and integrity. “His was a true Horatio Alger story. He grew up in an orphanage, dirt poor, and went on to make millions and millions of dollars and raise a great family. His life was a great American story.”

Janie met Walsh in 1985 at a White Sox game and said that while he taught her how to live, in his final days, he taught her how to die with dignity. “It was so beautiful and he was so kind to people along the way,” she said. “He really taught me the true meaning of living and the true meaning of dying. In the end, he had his own wake. So many people came by to see him and say goodbye. It was amazing to see how many lives he had touched.”

In addition to becoming an owner member of the board of directors of the Chicago White Sox and Chicago Bulls, Mr. Walsh continued to add titles to his resume. He was founder and chairman of the Title Company of America; managing partner of Walsh Partners, a real estate development firm; principal of Walsh and Gahlberg Real Estate Group Inc.; and principal of Walsh & Reynolds Financial Group, a financial planning firm. He was also a former chairman of the board of Elmhurst Memorial Hospital; former chairman of Elmhurst Savings and Loan; and chairman of Maryville Academy.

He was also involved in myriad philanthropic pursuits in the community. He and Janie chaired many events on behalf of Catholic Charities over the years—including serving as chair-couple of its prestigious Spirit of St. Nicholas Ball in 2014. This ongoing generosity is emblematic of a man who was beloved by all who who knew him. As eldest daughter Julia said, there was much more to Chuck Walsh than his sports teams and businesses. He was a fearless risk taker, and overcame every obstacle that life presented him. “My dad never waited for opportunity to knock on the door,” she says. “He got up, opened doors, and created opportunities for himself.” At home, he was a loving husband, father, and grandfather. He was also a friend and mentor to many—known by all for his gentle modesty.

“His favorite expression was that he believed in understated elegance,” said Charles H. Walsh Jr., joking that the most opulent things his father wore were the championship rings for one of his sports teams. One of Walsh’s close friends said he would often engage in conversations with people who asked about whatever ring he happened to be wearing, and he would even let them try them on.

“He always wanted to teach me about business, and one of the things he would say to me is he wanted to wake up in the morning and shave the face of an honest and fair businessman,” says Walsh Jr., who started Walsh Partners with his father in 1986. “He taught me to be grateful for what you have, and to be humble. Everything that I am, everything that I own, everything that I should ever be, is because of Dad.”

As Julia put it: “My father didn’t tell me how to live. He lived and let me watch him do it. I remain forever blessed for this gift.”

Youngest daughter Katie echoes those sentiments. “My dad was amazing. As I put the pieces of his accomplishments together, I was completely astounded by how much he achieved during his lifetime, and by the impact that he had while on this earth,” she says, adding that he would say “not bad for an orphan boy.”

But perhaps the most touching testament to Walsh’s humility and gratitude is left at the orphanage where he got his start in life. Sister Catherine Ryan of Maryville Academy often credits Walsh’s leadership during his chairman days for “saving” the institution during a rough time in its history. And given Walsh’s statements in the 2006 interview, it’s clear that the care he received there as an orphan left an indelible impression: “Maryville instilled in me a love of family,” he said. “We were living on dandelion greens before I got there. I remember wanting to be so rich that I would have bulging pockets of candy.”

Charles H. Walsh found those pockets of candy, and more, leaving a legacy that will not soon be forgotten. A Horatio Alger story indeed.