Lake Forest resident Steve Foley, Sr., known for his eponymous car dealership in Northbrook, passed away on Friday, March 23. But there was so much more to this kind and stately man than his innate ability to sell cars—he was a true example of hard work, integrity, generosity, and humility. Steve lived a life where faith and family were held above everything else.

Steve was an Irishman and he was very proud of his Irish heritage. His father came to the states from County Clare Ireland at the age of 13 and ultimately became a Chicago fireman. He married his wife Helen and had two daughters, Mary and Eileen. He was at the fire station when he received the news that their third child was born—a boy. Then the fire alarm sounded and he was one of the first responders. Steve’s father was electrocuted in that fire and never met his newborn son.

Thankfully Steve’s mother had a strong and supportive family. She had two brothers and three sisters. One of her brothers was a priest who became a monsignor and rector of Mundelein Seminary—Monsignor Malachy Foley. Her sister Therese was a nun who chose the name Sister Mary Peter. 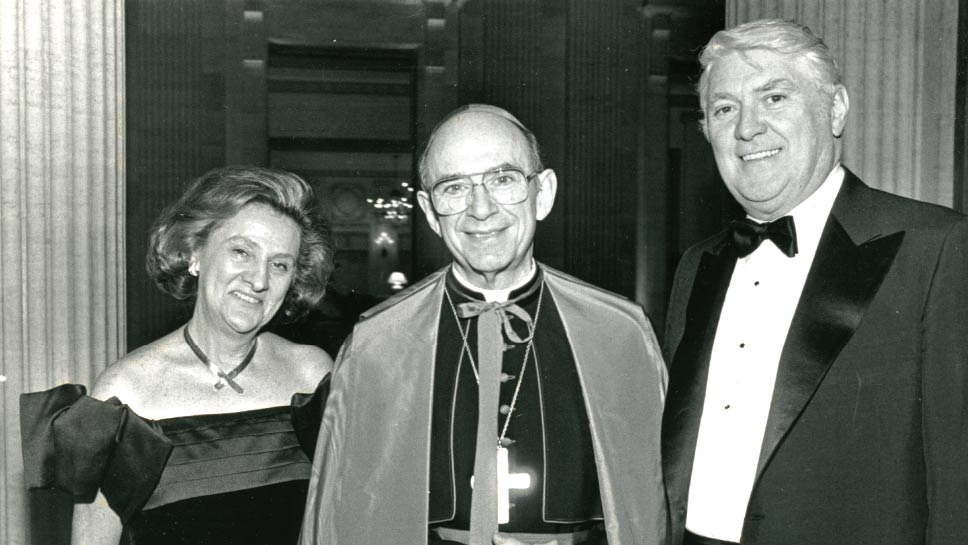 Steve had a deep faith, in large part due to the influence of his mother, Monsignor Malachy, and Sister Mary Peter. He went to Quigley North and Mundelein Seminary. Steve often talked with his family about the wonderful memories he had from his time at Quigley and Mundelein. He made so many friends, and they were life-long friendships.

Steve also had a passion for cars. His mother often told the story that his first word was “auto” not “Mama.” He started driving at a young age because his mother couldn’t drive and he would need to take her where she needed to go. When Steve decided to enlist in the army during World War II, he was told that he would be a Chaplin’s assistant. He told the story that when he got to Germany, he was asked whether he could drive a certain kind of military grade jeep. His response was, “I can drive anything.” He said the best part of the army was that he had a jeep. Thankfully, the war was almost over by the time he went overseas. He returned home and enrolled at Loyola University along with his best friend from his Mundelein Seminary days, Tom Folliard.

Tom started dating a woman named Mary Hayes. And Mary Hayes had a best friend named Mercedes Meyenberg. One day, Tom and Steve were studying when Tom asked him to go to lunch. Steve thought that was a great excuse to take a break from school work. Tom was meeting Mary, and Mary was going to bring her friend, Mercedes. This is how Steve met who was soon- to-be the love of his life.

Steve and Mercedes married April 26, 1952 when Steve was working at GMAC, the financial arm of General Motors. Shortly after they were married, Steve was offered a promotion but it required a move to Paris—Paris, Illinois that is. Neither Steve nor Mercedes wanted to move away from their families and Steve knew that declining the promotion would delay any further advancements so he looked for a new job.

Since he loved cars, he accepted a job selling cars at Hollingshead Oldsmobile on the South Side of Chicago. Steve’s mother was very concerned and is known to have said, “Why do you think you can sell cars; you couldn’t sell ice cream on the Equator.” But Steve proved her wrong with a personality that could win friends and influence people. He was successful at selling and Mr. Hollingshead became his mentor. Steve always said that Mr. Hollingshead was the most intelligent man he had ever met. He soon moved from sales to management and when Mr. Hollingshead died in 1964, Steve became the dealer/owner and renamed the dealership Steve Foley’s Hollingshead Oldsmobile. His dealership/ownership days began.

In 1974, Steve sold the Oldsmobile dealership and purchased a Cadillac dealership in Northbrook and renamed it Steve Foley Cadillac. In 1983, Steve was vetted by Rolls-Royce and found worthy of the Rolls-Royce and Bentley franchises.

Over the next decades, the manufacturers offered dealers wonderful trips to those who achieved sales and service goals. Steve earned every trip offered and being one of two dealers in the world to receive consecutive “Master Dealer” distinctions for 33 years. He and his wife went on many exciting trips—to the Royal Astor horse races; the America’s Cup when it was in Australia; they sailed the QE II, and flew on the Concord several times. They travelled the world thanks to Oldsmobile, Cadillac, Rolls-Royce, and Bentley. One of his most memorable trips was to Monaco where he and Mercedes were to be seated at a dinner with Princess Grace. Unfortunately, it was that very day that she perished in a car accident.

Many of Steve’s employees referred to him as “the rock,” mentoring and developing employees to where they stayed with his dealership for their entire careers. Steve’s son, Steve Jr., often says he is the luckiest guy in the world to have worked along side his father for more than 35 years, starting at the dealership as a car washer. “Those in the industry say that you have to have cars in your blood to want to be part of this business,” says Steve Foley, Jr. “I definitely do, and my son Stephen does as well.” Sisters Cathy Foley and Maureen Foley Schabel also spent years working with their dad, seeing his example of hard work, integrity, and “pure genius” played out everyday.

In addition to his work at the dealership and also owning and operating several tire and service centers throughout Chicago in a time before this was widely done, Steve served for 19 years on the board of the Chicago Automobile Trade Association (CATA) and was chairman of the Chicago Auto Show in 1980. He was a member of the Cadillac Advertising Association and the National Dealer Council.

A big believer in leaving places better than he found them, Steve was involved in and supported numerous charitable organizations. He and Mercedes served twice as chairpersons of the Loyola Stritch School of Medicine Awards Dinner, raising hundreds of thousands of dollars for medical student scholarships.

With all of his accomplishments, Steve would say his greatest success story was that of his family. When his wife Mercedes had a stroke in 2005, he stopped going into the dealership—instead choosing to be by Mercedes’ side everyday.

“They used to go to daily mass before my Mom had her stroke,” says daughter Maureen. “It then became too hard to do that, so they began to say the rosary five or six times a day. When my mom would look sad, Dad would say ‘Merce, let’s say a rosary.’ And that would turn her around.” Steve died just short of he and his wife marking their 66th wedding anniversary.

Steve loved his four children, four grandchildren, nieces and nephews, and he shared the blessing of the faith he treasured. His youngest grandchild, Richard, is now the tallest of the grandsons. His only granddaughter, Mercedes, who is named after her grandmother, was Steve’s princess.

The summer after Cathy graduated from high school, she worked at the Cadillac dealership. She and Steve typically drove separately because he left earlier than she did. But one day, the two drove together. He had the radio set to WGN with Wally Phillips and as Cathy was listening, she looked at her dad and noticed he was quietly praying the rosary in his lap. “Dad, how do you listen to the radio, drive, and pray the rosary at the same time?” Cathy remember asking. “Dad said, ‘Cathy Ann, don’t you know the secret to success is to work like it all depends on you and pray like it all depends on God?’”

These days the entire Foley family find comfort knowing that their beloved husband, father, uncle, and grandfather is resting in peace. Just two days after Steve passed, his grandson Ryan, whom he had taught how to golf, scored a hole in one. “A friend told me that we’d begin to see signs that Dad was in Heaven,” says Maureen. “That was most definitely one of them.”