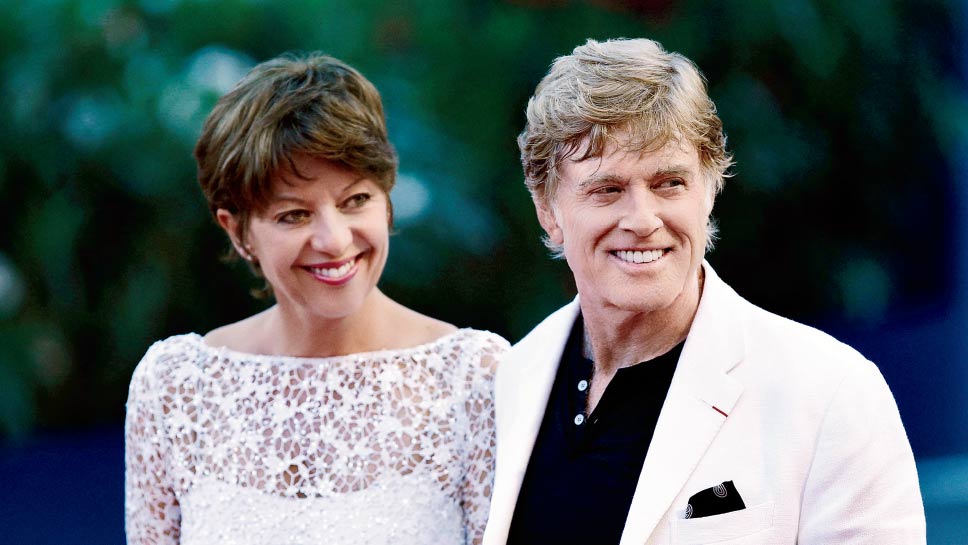 By the time you open this magazine, Robert Redford and his wife, Sibylle Szaggars Redford, will already be in Lake Forest. But the Hollywood icon who made his directorial debut with the Academy Award-winning Ordinary People in 1980 is in town this time to support a very different kind of artistic performance when Sibylle—visionary and creator of The Way of the Rain–Voices of Hope—brings her live, multi-disciplinary production to the John and Nancy Hughes Theatre at Gorton Community Center on June 1 as part of the 35th annual Smith Nature Symposium. The event continues at Brushwood Center at Ryerson Woods, where the couple will be presented with the distinguished Nature Leadership Award (and attend a VIP party hosted by Bill Kurtis and Donna LaPietra). Given Robert Redford’s long-time connection to Lake Forest, we couldn’t pass up an opportunity to interview the environmentally-active power couple and shine a spotlight on Brushwood Center’s important world-class programming.

Robert Redford and his wife, Sibylle Szaggars Redford, are bound by their passion for the environment and their work as creative performance artists. While many know Robert Redford for his work as an award-winning Hollywood actor, director, and producer, he has been an environmental activist and advocate for climate change awareness and clean energy since the early 1970s. In 2016, he received the Presidential Medal of Freedom from President Barack Obama. He has served as a trustee for the Natural Resources Defense Council and is co-founder of The Redford Center with his son Jamie Redford.

Equally impressive, Szaggars Redford, has worked as a multimedia environmental artist for more than three decades—raising awareness of our environmentally unsound practices and paying homage to planet earth with her art. In 2015, she founded The Way of the Rain nonprofit organization—dedicated to supporting the development, production, and performance of educational and artistic performances to promote public awareness for the protection of the earth. Affectionately referred to as Bob and Bylle (pronounced “Billie”), the Redfords answered questions for Forest & Bluff magazine about The Way of the Rain, returning to Lake Forest, and what the Nature Leadership Award means to them.

You are bringing The Way of the Rain to the Chicago area for the first time. What does this mean to you as an artist and environmental activist?

Bylle: Well, I am honored to have been invited to share my work as an artist and environmental activist. And so, I want to thank the Brushwood Center at Ryerson Woods and the Smith Nature Symposium for this opportunity.

How does it feel to be coming back to Lake Forest specifically where you directed Ordinary People nearly 40 years ago?

Bob: It’s a pleasure to return. This is the place where I directed my first film and I will always be grateful for the support we received from the community. The landscape, the city, and the culture all provided an important backdrop to Ordinary People.

This production is nature focused and includes music, art, film, and the spoken word. What do you hope the audience at the upcoming Smith Nature Symposium to take away from the experience?

Bylle: I hope audiences will walk away from the performance feeling a renewed connection to our home, planet earth. I hope they will be reminded of Earth’s beauty, and fragility and the responsibility we all share to protect, preserve, and cherish this—our only home.

Bob: To build on what Bylle is saying, with everything that is going on in the world right now, I believe art plays a critical role in so many issues we are facing today; art nurtures the soul, provokes thought and inspires critical thinking. And during times like these, art can also foster a deeper understanding and connection to the earth. We desperately need these messages right now.

How did you meet Tim Janis, and how did his collaboration help shape the piece?

Bylle: I met Tim Janis and his wife Elizabeth Demmer at a time when I felt compelled to include orchestra, chorus, and more of a youth presence within our The Way of the Rain performances. I had been having these thoughts, when out of the blue, our Managing Director Gregory Leon Baird, met Tim and Elizabeth by chance in Santa Fe. They struck up a conversation and we discovered they have dedicated their lives to supporting philanthropic issues through their art.

After the performance, you both will be presented with Nature Leadership Awards. What does this distinction mean to you and how do you hope your work will inspire others?

Bob and Bylle: Well, it is an honor. And we are grateful to Brushwood Center and to Smith Nature Symposium. There are so many who work tirelessly on these issues, and really, their work inspires us.