A small mixed-breed dog named Gabriella cries next to an abandoned building in Chicago on a Halloween night. A neighbor calls 311, triggering a response from Chicago Animal Care and Control (CACC) the following day.

Gabriella is in agony—might have been for days. A monster of a human had doused the dog with bleach, burning the animal’s eyes and other parts of her body.

CACC contacts PAWS (Pets Are Worth Saving) Chicago, and PAWS Chicago receives Gabriella and sedates her. PAWS Chicago takes the dog to one of Chicago’s top veterinary ophthalmologists at Eye Care for Animals, hoping to save one of Gabriella’s eyes.

Both have to be removed. 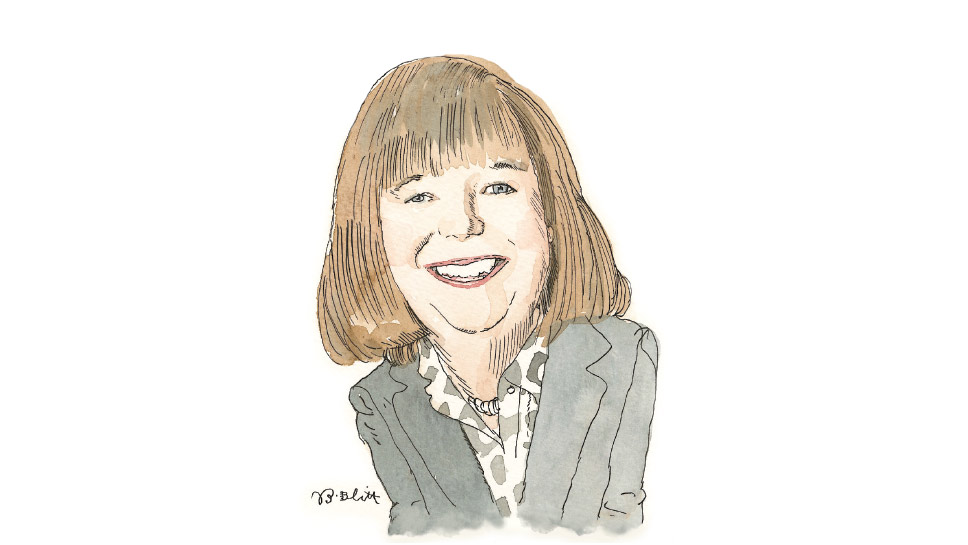 Lake Forest resident and CEO of PAWS Chicago Kristin Pearson shares the story of a her journey to help save animals in need. ILLUSTRATION BY BARRY BLITT

“After the surgery, Gabriella was scared but still trusted, if you can believe it, humans,” says PAWS Chicago CEO Kristin Pearson of Lake Forest. “One of our co-founders, Paula Fasseas, fostered the dog for four to six weeks, and then a family took her home. It reminded me of someone who told us, ‘We want your most challenging animal’.”

Pearson, owner of two dogs (Molly, 11, and Penny, 9) and a cat (Chloe, 14), says there is nothing like seeing the joy of a family taking an animal home. During our breakfast meeting, she feeds me some startling—and heartwarming—statistics.

On the up side, the number of animals euthanized across the city of Chicago has declined from nearly 43,000 in 1997, when Fasseas and her daughter, Alexis, launched PAWS Chicago, to an estimated 5,500 in 2017. People of all ages served a combined 141,000 volunteer hours in 2017, or the labor power of 68 full-time employees. PAWS Chicago achieved a better than 98 percent save rate and is working hard to help the city of Chicago overall reach a better than 90 percent save rate and No Kill status.

“I drive a lot each day; I’m a rover,” says Pearson, who lived in Lake Bluff for 20 years before moving to Lake Forest with her family last June. The mother of three (college students Ian and Katie, and Lake Forest High School junior Ellie) has been married to Garth Pearson for nearly 25 years and has been CEO of PAWS Chicago since June 2017. “I’m a gypsy CEO. I consider this my dream job; I’ve always loved animals, and I wanted to find a profession where I could use my business skills and help an organization have an incredible impact on the world. If it’s possible to medically or behaviorally rehab a pet, we welcome that animal.”

The impact animals have on people is powerful.

“We see the best in humans, because animals can’t speak for themselves,” she adds.

The PAWS for Life Program made more than 270 home visits in the Englewood and Back of the Yards neighborhoods in Chicago last year, providing medical care for 236 pets and performing 1,273 free spay/neuter surgeries.

“Some can’t afford to keep a pet healthy,” says Pearson, who graduated from Wellesley (Massachusetts) College with a degree in economics, earned her MBA in 1992 at the University of Michigan, worked for the New England Journal of Medicine as a marketing specialist and spent 13 years in the healthcare engagement field. “We performed surgeries in a PAWS bus, in a church parking lot.”

The house in which she lives now is her 25th. Gabriella’s home?

Safe. And full of love.

“You should see how that adorable dog loves to snuggle with people as she is passed from one set of arms to another,” Pearson says.

A life worth saving indeed.

For more information about how you can get involved with PAWS, visit pawschicago.org.