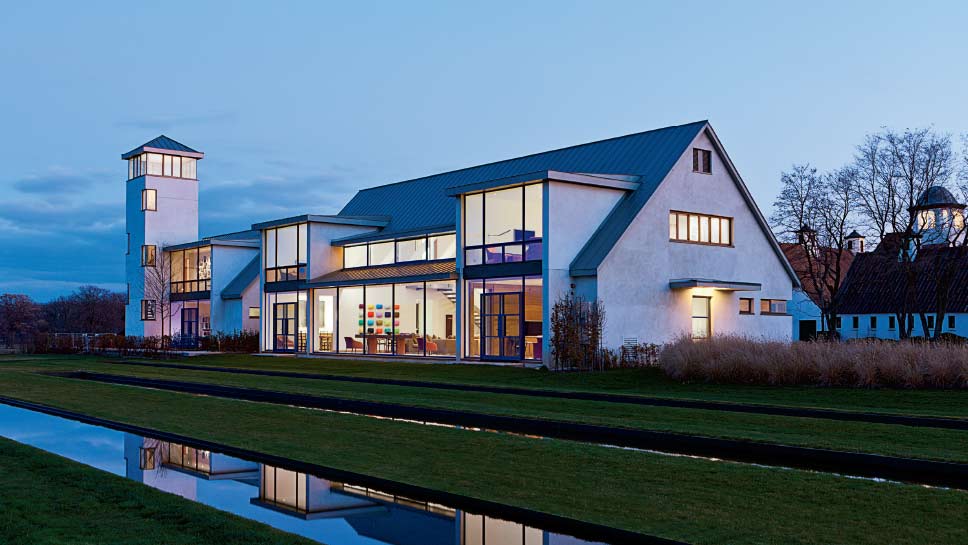 One of Chicago’s most acclaimed architects will appear in Lake Forest this month, in part to promote a new book about his work but also to get the word out about the importance of preserving our historic structures. We had a chance to speak to John Vinci about his impact in the area over the last few decades, including a stunning Summer House project at Crab Tree Farm in Lake Bluff. PHOTOGRAPHY BY WILLIAM ZBAREN PHOTOGRAPHY

For most preservationists, John Vinci is a man who needs no introduction. The award-winning architect has a portfolio that spans 50 years and includes the restoration of some of Chicago area’s most treasured landmarks—including Lake Forest’s own historic Market Square.

And yet, the project that is in the spotlight in advance of his March 15 Lake Forest Preservation Foundation presentation at the Gorton Community Center is not a restoration at all. Working with Lake Bluff resident (and local legend) John H. Bryan Jr., Vinci was commissioned to create something new and modern on the historic Crab Tree Farm—a 9,500-square-foot building that is among those featured in John Vinci: Life and Landmarks, a new book published by Northwestern University Press. This book will be discussed as part of Vinci’s presentation later this month.

“I met John when he lived in Kenilworth, back in the 1980s,” says Vinci, explaining how Bryan had recommended him to do some restoration work at his parish, Kenilworth Union Church. “Then he bought the farm, and his friend recommended me as a consultant for restoring some of the buildings.” 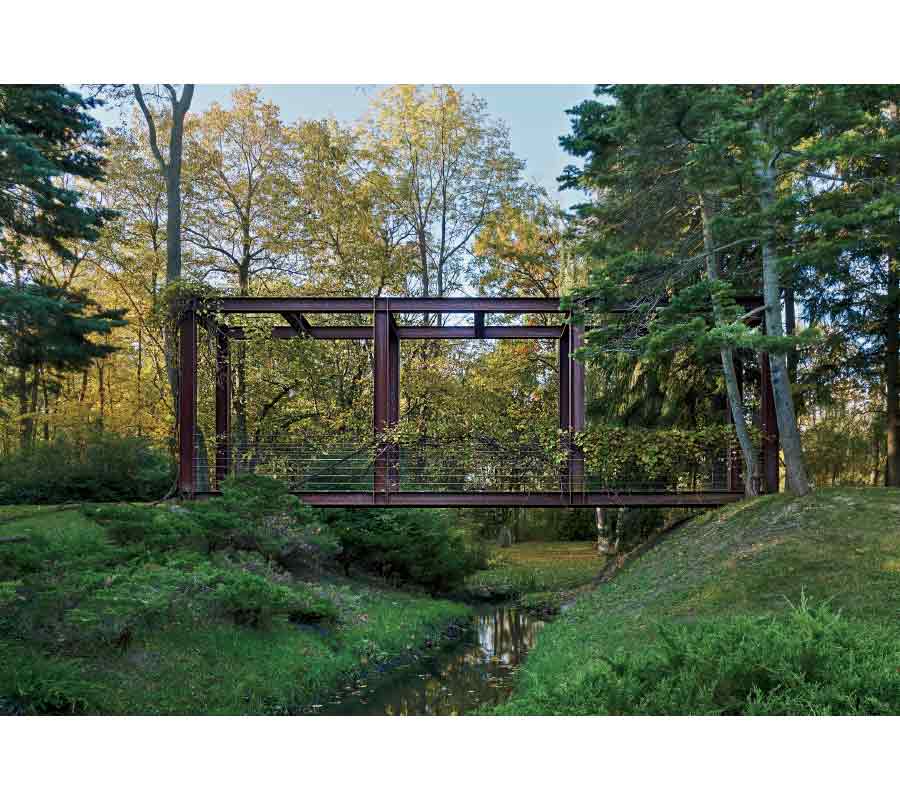 The steel pedestrian bridge at Crab Tree Farm was completed in 1996.

A unique friendship and creative synergy was born—one that brought Crab Tree Farm into the 21st century while enhancing the grounds of the historic farm complex. “We had a common interest in Arts & Crafts furniture so eventually he kept giving me projects at Crab Tree Farm, one being a little museum for his collection of miniature furniture and decorative objects,” says Vinci.

There was also a trellis restoration. And then a steel pedestrian bridge, completed in 1996. Through it all, conversation always came back to a vision Bryan had for what they affectionately began to call the Summer House.

“He and I worked on trying to purchase the Farnsworth House and he thought when he did the Summer House, this could be our inspiration,” explains Vinci. “We started by doing something with a flat roof and more modern, and it just didn’t feel comfortable. Then he had the idea of emulating the barns that were on the property. From there on, I worked out the design.”

As most architecture buffs know, Farnsworth House was designed by the iconic Mies van der Rohe, who happened to still be leading programs at IIT when Vinci was a young student there. “I wish I could say he was my teacher, but he was there as the head of the school and he talked to the students several times,” says Vinci, who also later went on to teach at IIT and Roosevelt University in the early days of his career. “He retired around the time I finished school, but I did see him around.”

Vinci’s interpretation of that ground-breaking architectural landmark at Crab Tree Farm is a sleek 9,500-square foot Summer House (and swimming pool complex) located adjacent to the historic barns. It is an example of how a modern structure can be created in harmony with historic buildings—with white-washed walls honoring nearby barns and an all-glass rear elevation paying tribute to Farnsworth House’s International Style.

“It grew and evolved,” Vinci explains. “In the middle of the project, we added the pool house. It’s my favorite part of the whole project.” 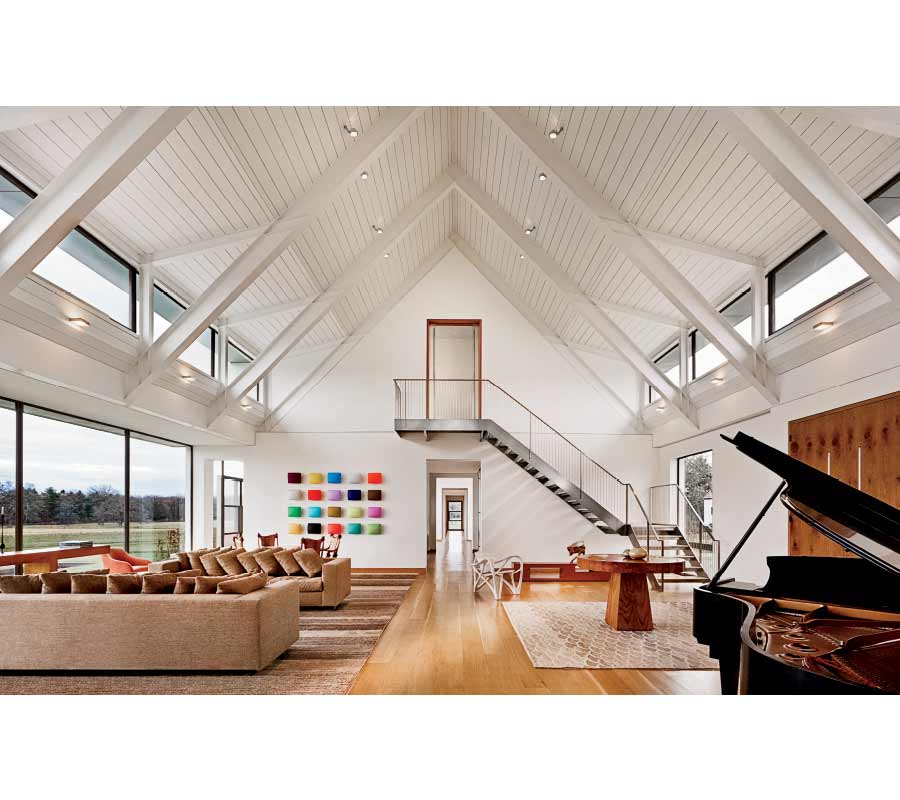 Inside the Summer House

Those who attend the March 15 presentation can expect to hear Vinci speak about this process as well as his award-winning historic preservation work in Chicago and Lake Forest over the last five decades. However, Lake Forest Preservation Foundation members are also hoping the architect’s presence will help to inspire and education today’s homeowners about the importance of keeping architecturally significant properties intact.

“I’m a Modernist by training but historic preservation is something I strongly believe in,” says Vinci, explaining that specifically in Lake Forest, he has worked on multiple commercial and adaptive reuse projects that aimed to preserve facades and be respectful to original architecture. “I think we need to educate people and let them know that when they buy something that’s an architectural heirloom, it needs to be protected and if they remodel it, it needs to stay within the original footprint.”

With so many architectural and national historic landmarks in Lake Forest and Lake Bluff, Vinci believes the next generation should be empowered with the knowledge about how to preserve and protect the structures in a way that can still work for modern lifestyles.

“Lake Forest has to look at this problem seriously and guide their people to do the right thing,” he adds. “There are ways to rework the interiors of some of these old houses and satisfy the need for flexible space while still maintaining the architecture. What I have offered throughout my career are solutions, and I’m very proud of that.”

John Vinci’s presentation will take place at 7 p. m. on Thursday, March 15, at Gorton Community Center in Lake Forest. The program is free but advance reservations are appreciated. For tickets or more information, call 847-234-1230 or visit lfpf.org.