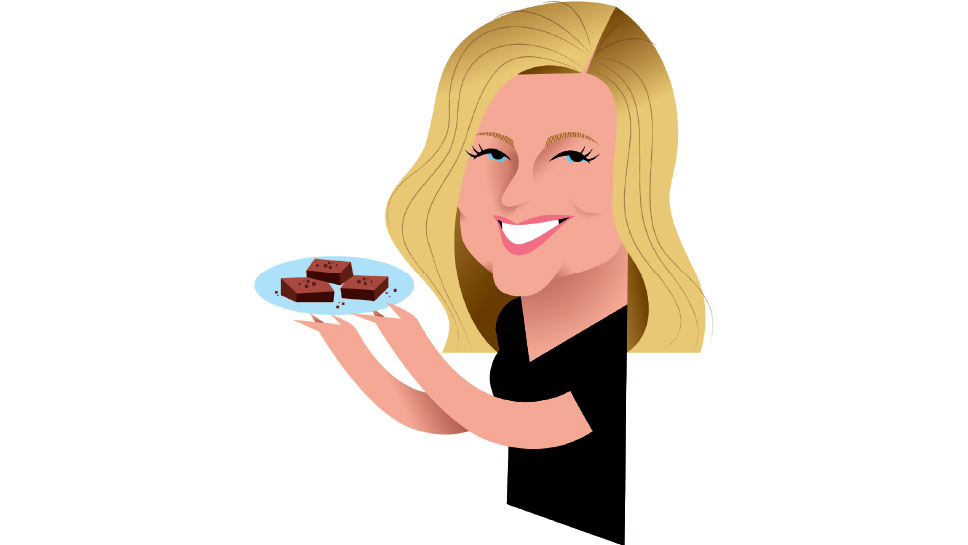 The secret’s in the sauce. Or in this case, it’s in Ambler FitzSimons head. The brownie recipe she developed at age nine. Picture the young Ambler, taking a children’s cooking class taught by a local woman in Lake Forest, and experiencing that spark of creativity that fuels a passion and eventually inspires an entrepreneur.

“That class inspired a love of baking and a brownie—a very fudgy brownie that I perfected over the years in my mother’s kitchen,” says FitzSimons. “I knew from the way people reacted to the brownie that they really liked it. Almost without planning on it, I kept it a secret, and it became my signature recipe.”

Fast forward to 2018, and her business, Blissful Brownies enjoys large “drop-ship” orders from online retailers such as Williams Sonoma, Saks Fifth Avenue, and Harry & David. But first, FitzSimons would go to law school, relocate to Oregon, marry, and have children. Even when she was in law school, FitzSimons says she knew that she would someday start her own business.

“I knew it would have to do with food or baking,” she says. “I thought I would work for a while, raise capital, and open a storefront. But with the web, I was able to dip my toe in.”

She created the company’s signature classic brownie, called the Classic Chocolate, which is much like the brownie she developed as a young girl (the secret recipe). Initially, she baked the brownies in a rented incubator commercial cooking in Oregon (“At $15 an hour, it was cheap!”) to buying one Blodgett convection oven, then another one. And Blissful Brownies gained momentum.

But it takes more than a good brownie to make a successful business, and fortunately FitzSimons has a head for business too. “Our mission has been to elevate the humble brownie to be a luxurious experience,” she says.

With that branding goal in mind, she created a logo and developed elegant presentation and packaging that serves as a lovely gift—a kraft paper gift box with the signature “B” logo, all tied in a silky hot pink bow. Like most entrepreneurs, FitzSimons did all of the early sales and marketing herself, calling countless online retailers, stores, and restaurants, sending samples, and attending upscale food shows. “I knew once I got it into peoples’ hands (and mouths), the brownies would sell themselves,” she says. And they did.

The Classic Chocolate brownie is truly blissful. It’s fudgy with chunks of chocolate and a slightly crunchy crust—a perfect balance of creamy fudgy-ness, chewable texture, and layers and layers of chocolate decadence. All of Blissful Brownie’s other flavors are based on this Classic Chocolate master recipe. The company also offers seasonal brownies and bars, and creates new flavors and specialty items like chocolate dipped brownies and dipped desserts for Williams Sonoma. For Valentines’ Day coming up, FitzSimons is offering heart shaped Blissful Valentine brownies, a heart-shaped box of mini brownies, and decadent Raspberry Cheesecake Brownie Heart Cakes.

Variations on the classic brownie, which are regularly available, include caramel, peanut butter, coconut, chocolate ganache, and more. There are also lemon bars, shortbread, and specialty bars, like the Finnian Bar (named after her older son) that she introduced last year and brings back on occasion. She’s currently tackling the challenge of creating a Larkin Bar for her younger son. “I’m thinking shortbread and strawberries,” she muses out loud.

Four years ago, FitzSimons moved she and her two sons—and her two ovens—back home to Lake Forest. As she regains momentum in her own commercial kitchen in Lake Forest, she says she is happy with her decision to start Blissful Brownies because, “You are delivering something that makes people happy.”

What could be better than that?

For more information and to order (with complimentary delivery to Lake Forest and Lake Bluff), visit BlissfulBrownies.com.