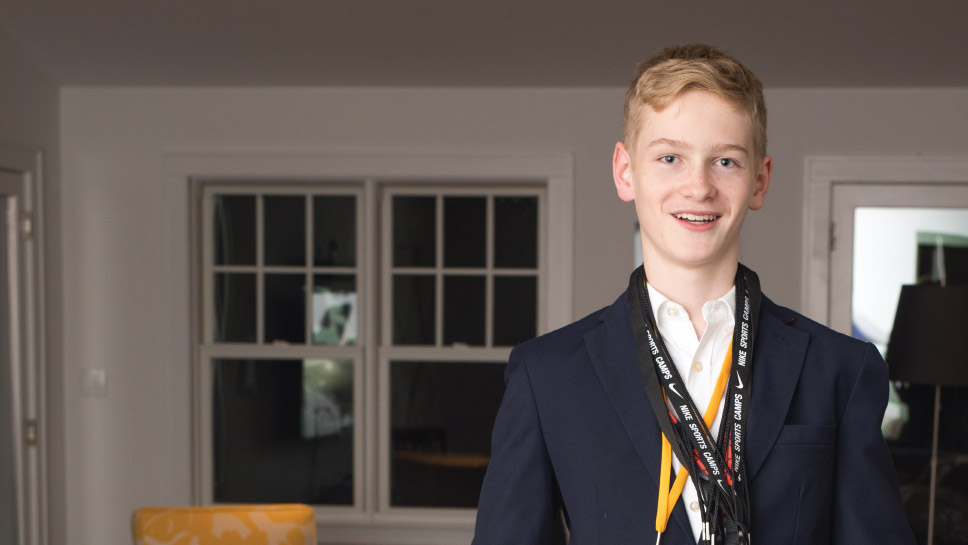 Lake Forest High School freshman Peter Elliott is getting an early start on a career in sports journalism. PHOTOGRAPHY BY ROBIN SUBAR

Peter Elliott was going to be an NFL wide receiver. Hands down. Nobody in the fourth grade caught as many passes as he did during recesses at Everett Elementary in Lake Forest. With his precise route-running and Velcro-reliable mitts, Elliott made nine-year-old quarterbacks look All-Pro great in the middle of school days.

“Our school’s field,” he adds with laugh, “wasn’t very big.”

Peter Elliott dropped his plan to be a star professional football player four years later. Maybe he would write about sports rather than talk to sportswriters after games. As an eighth-grader at Deer Path Middle School, he was already nearing veteran status with Talking Baws, primarily a Scottish soccer website.

“I’d been blogging about sports for a while, and an editor at Talking Baws direct messaged me, wondering if I’d be interested in writing posts for the site,” says Elliott, now a Lake Forest High School freshman. “I was. But here’s the thing: I was told, ‘Write about anything you want to write about.’ So I did. I wrote about professional football and baseball, high school recruiting news, pro teams’ transactions, as well as analyses.”

“What impresses me the most about my brother can be summed up in two words—his drive,” Will says. “He’s so passionate about sports, about covering sports, about writing about sports. Nothing can get in his way when he has a passion for something. I had to ask him, though, ‘Is there is a Scot who is interested in an Elgin football player who is being recruited by Iowa State?’”

In the fall of 2016, Lake Forest College football coach Jim Cantanzaro asked Elliott if he’d be interested in conducting and producing a weekly pregame show for the LFC football team. It would entail interviewing coaches and players. LFC had held a camp for football prospects at Willowbrook High School months earlier, and it was there where Catanzaro noticed a certain youngster acting adult-like and professionally. Elliott interviewed the prospects and filed reports/posts for various outlets.

Elliott jumped at the opportunity to cover LFC football without having to type snappy, informative sentences for his readers.

“You have to be versatile in sports journalism—in any form of journalism, really—these days,” says Elliott, the son of an advertising executive (T.S.) and a marketing professional (Stephanie). “Sports media is changing so rapidly and the best way to keep up with it is to be persistent and curious and willing to adjust. Doing what I did during the LFC football season was different and challenging, but I enjoyed it, and I appreciated the chances to learn that came with the new experience. How many eighth-graders get to do something like that?”

For a Creative Arts project in eighth grade, Elliott and a couple of his eighth-grade classmates turned in a sports documentary. The students interviewed sports journalists and others and asked each to select the 10 best NBA players of all-time. Each subject also was encouraged to support the selections with statistics and opinions.

Stephanie Elliott convinced her go-getter son to go out for cross country at LFHS in the fall of 2017. He struggled at the outset of the preseason summer camp, but he settled in gradually as he bonded with his frosh-soph teammates in the grueling sport.

“The kids in cross country, all of them, are energetic with a great level of sportsmanship,” the 5-foot-11, 120-pounder says. “I tripped and fell down in a home meet, and nobody from the other team stepped on me.”

“I was, by far, the youngest person in the press box and the youngest person asking questions after the games,” says Elliott, who received his first box of business cards (PETER ELLIOTT, SPORTS REPORTER) in May. “The next-youngest at the football games were the writers for Northwestern’s student newspaper.

“You want to hear something funny?” he adds. “When I was a student at Deer Path Middle School and gathering information for Talking Baws, I called up football prospects in other states to interview them about their college commitments. Some of them called me ‘Sir,’ not realizing I was four or five years younger than they were.”

Will wouldn’t be surprised if his twin ends up editor-in-chief of ESPN.com someday. Then again, would anybody be surprised? Such a position requires sports fanaticism, ambition, intelligence, creativity, perseverance, and adaptability on the fly.

“I watched Peter work really, really hard in cross country,” Will Elliott says. “He kept getting better and better, kept beating his personal-record time. That drive of his, the one he has as a sports journalist, is the kind he has when he races.”