Those we have lost live on in our memories forever. For the Lake Forest family of the late Daniel Trew, now buried at Fort Sheridan Cemetery, that memory is honored every holiday season with the ceremonial laying of wreaths—not just on his tomb, but on the grave of other soldiers who gave their lives to serve our country.

“The Trew family goal is to raise enough money for 850 wreaths,” says Cindy Tobin, daughter of the late Daniel Trew, now buried at Fort Sheridan Cemetery. “We honor our father and all those who served in our nation’s military as we adorn the tombstones of Fort Sheridan Cemetery with fresh wreaths this Holiday Season.”

To give a little back story, this all started a about five years ago when Lake Forester and owner of Northwood Wreaths, Andy Barrie, took some extra wreaths up to a veteran’s cemetery in Union Grove Wisconsin.

A Lake Forest family embarks on a mission to dress the graves of soldiers buried at Fort Sheridan Cemetery.

“We had about 300 wreaths left over from the holiday fundraising season, so my son and I drove up to Wisconsin,” says Barrie. “My dad was in the military and I wanted to honor him.”

As they were placing wreaths on the graves, an elderly woman, whose husband had served in Korea and was buried there, approached Barrie. “When I told her what we were doing, she said, ‘I hope you do this every year,’” he recalls.

And so, it began.

“We created the Fallen Hero wreath,” he says. Barrie’s company, Northwood Wreaths, has been manufacturing wreaths for approximately 450 charitable organizations in Illinois and Wisconsin to sell in their annual fundraising campaigns for 36 years. After Barrie’s encounter with the widow in Wisconsin, they began taking extra wreaths to both Fort Sheridan and Great Lakes Naval Training Center Base cemeteries before Christmas. 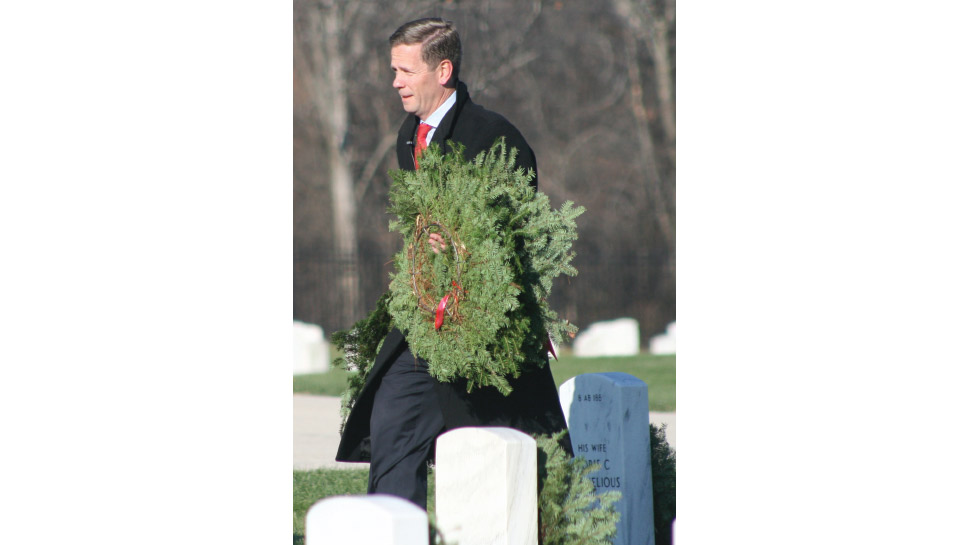 The company also manufactures petunia planters for Memorial Day, which they place on graves for a few days around that holiday. The planters are later taken and donated to the Captain James A. Lovell Federal Health Care Center and its outpatients. It was during Memorial Day two years ago, when Cindy Tobin and her family volunteered to help Barrie’s company place the planters at Fort Sheridan. She met Barrie and was inspired to spearhead an annual fundraising campaign to purchase as many wreaths as possible for veterans’ graves at Fort Sheridan Cemetery.

“My dad passed away four years ago, and he’s buried at Fort Sheridan,” says Tobin. “Remembering those who served and their families was very important to him.” Tobin’s father, Daniel Trew, served for 20 years of active duty, including two tours in Vietnam, and spent the last five years of his service at Fort Sheridan. After he retired as a Major, “he took great pride in officiating ceremonies at the Fort Sheridan and Great Lakes Naval Training Center cemeteries and commemorating important holidays, such as Memorial Day and Veterans Day.”

Last year, the Trew family raised enough money to purchase 400 wreaths. Barrie donated an additional wreath for every wreath the Trew family sold. But it bothered Tobin that many graves went uncovered, including those of civilians and children buried there. While she has set a goal to raise enough money for 850 wreaths this year, Tobin’s dream is to be able to decorate every grave at Fort Sheridan.

“My dad would be very proud of us,” she says.

This year’s laying of Fallen Hero wreaths will take place at 11 a.m. on December 16, at Fort Sheridan Cemetery on Vattner Road in Highwood, with a ceremony to commemorate the event and honor the soldiers who served. Civic leaders, community members, Boy Scouts, athletic teams, and other groups will be in attendance and help distribute the wreaths. Highland Park VFW Post 4737, which sponsors 150 wreaths, will provide a color guard this year. Additional volunteers are encouraged to sign up.

With about 2,700 graves at Fort Sheridan, what are you waiting for?