Sarah Shelley had the kind of English childhood American anglophiles only dream of. Growing up in Shropshire, a sparsely populated county about two hours north of London on the border of Wales, she happily attended boarding school from the age of 7. She also happily developed an appreciation for the architecture and history of the region.

“People are always shocked and sad for me that I went to boarding school, but I adored it,” says Shelley, who moved to the area with her husband and daughter, India, 15 years ago. “Shropshire is mainly known as being the birthplace of Charles Darwin. I have traveled the world but still think of the landscape and architecture of Shropshire as being the most beautiful. In fact, my brother and I still own the 14th century house where we were born.” 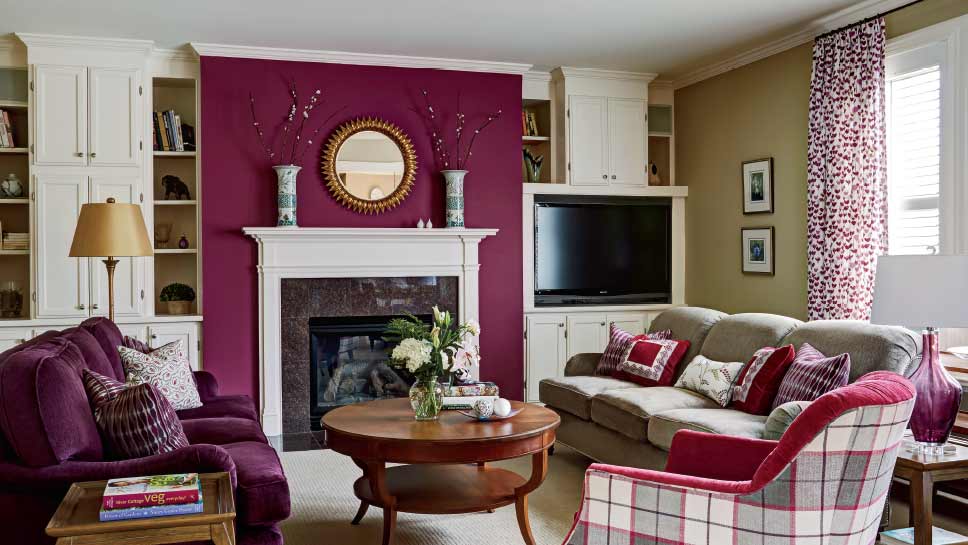 A British couple searching for a house in the area fell in love with Fort Sheridan’s architecture and ambiance in the early 2000s. Today, they have recreated a piece of modern England by the shores of Lake Michigan. We get a look inside and find out how they plan to spend their holidays. PHOTOGRAPHY BY MIKE KASKEL 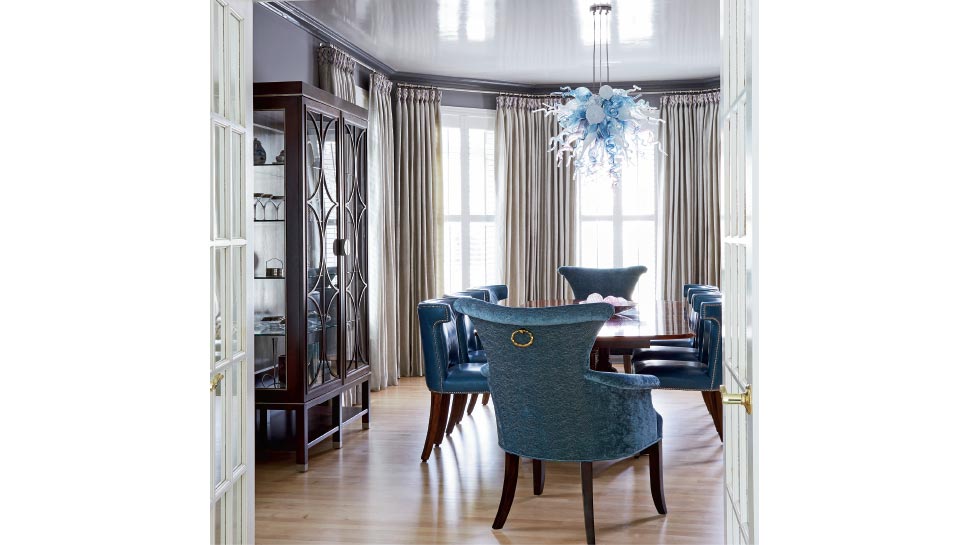 A corporate relocation to a company in Libertyville had the young couple house hunting throughout the region. But nothing they saw was quite right.

“India was only three at the time so was understandably bored with looking at houses so I said I would take her to see the lake,” says Shelley, explaining that her daughter would later attend Lake Forest Country Day School and Lake Forest Academy and is now a sophomore in college. “Whilst trying to find a way to get to the beach I drove into Fort Sheridan and just fell in love with the open space, the nature, and the architecture. There is something very European about it, particularly the walking paths. And there are many families from Europe living in the fort who all say the same thing.” 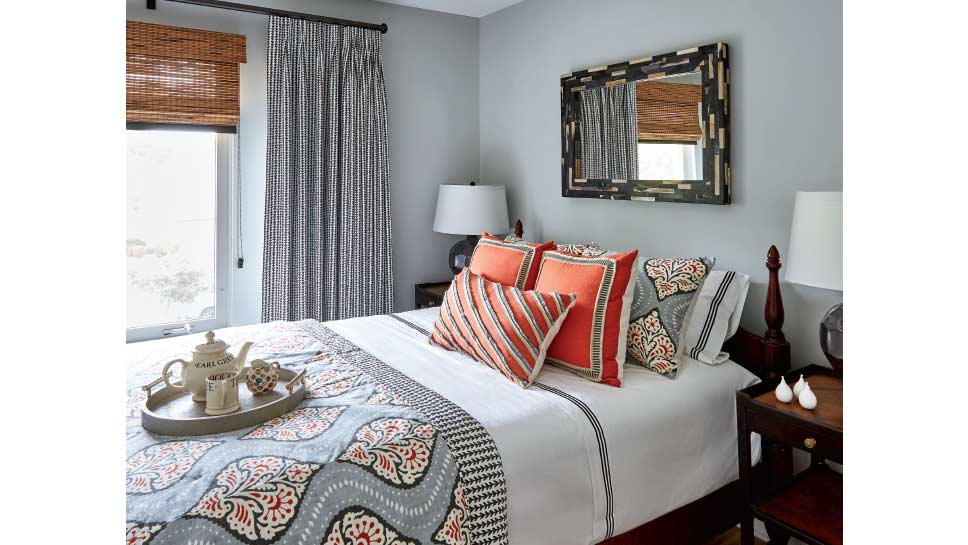 That was 2002 and in addition to the restored historic officer’s mansions, the village of Fort Sheridan debuted new construction luxury homes with the same elegance and architecture. The four-bedroom, 3.5-bathroom house that the Shelley family chose is more contemporary with an open plan layout that blends traditional architectural finishes with a modern edge.

As a life-long art collector, having a space that could welcome her eclectic collection was a must. She knew exactly what she wanted but wasn’t quite sure how to pull it all together—until she met Tina Dann-Fenwick, a like-minded Englishwoman from Lake Forest who just happened to be a highly regarded interior designer. The women met at a local UK connections group. 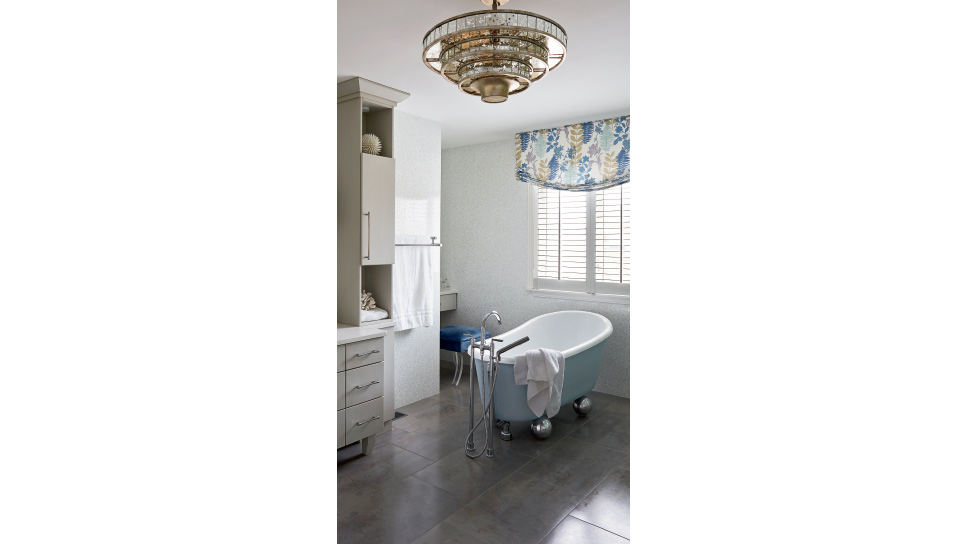 Dann-Fenwick, a Lake Forest resident who also relocated from England, began working with Shelley about four years ago to bring form and cohesion to her eclectic English style with a love of color and pattern.

“We just completed the design of their glamorous art deco style dining room with a unique (Dale) Chihuly-inspired chandelier,” explains Dann-Fenwick, who earned an ASID Design Excellence award for her work on the family’s master bedroom and bathroom project. “Before moving to the area, the couple had been living in a rented house in Windsor which had been featured in the pages of House Beautiful and she longed for a beautifully designed space.” 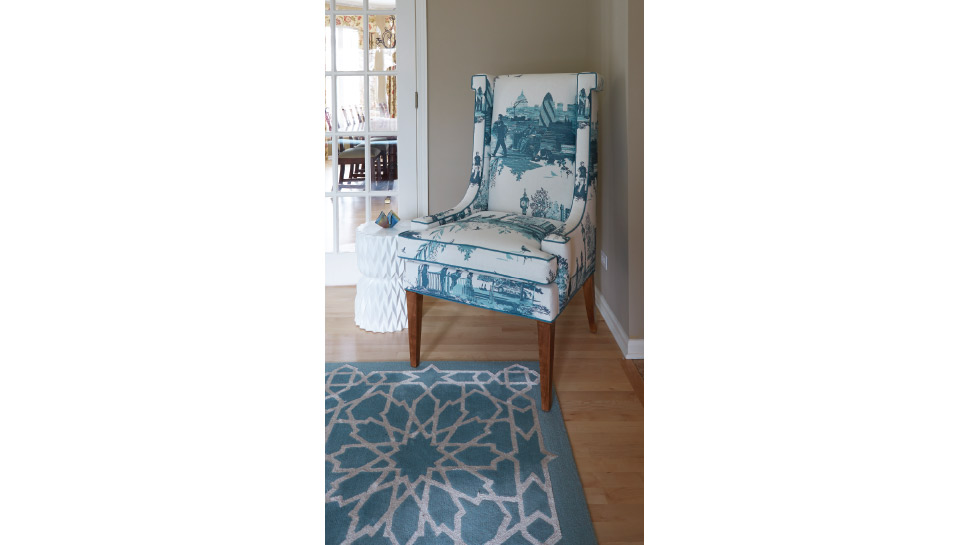 However, because Shelley had such a rich art collection from the UK and a distinctive style of her own, pulling it all together in harmony wasn’t such a simple task.

“I wanted to bring together everything from a 1640 painting of Shropshire to my love of Pop Art and neon. Tina had her work cut out for her on this project but I knew she would find a way. For example, she is currently helping me curate a gallery wall in my basement party room,” says Shelley. “I go back to the UK regularly and am always on the lookout for something to bring back.” 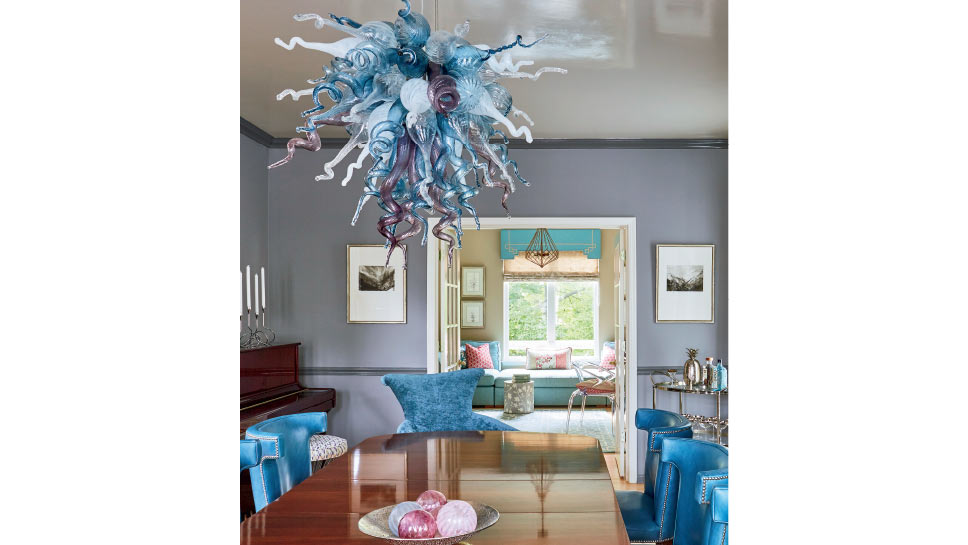 For a sense of exactly how eclectic this art collection is, consider that the 1640 “painting” she refers to is an archival copy of an original that she and her brother inherited. “We recently donated it to a museum as the oldest pictorial representation of the British town of Shrewsbury,” she explains. “We were both given archival copies of the original by the museum.”

This treasure shares wall space with modern pieces by British and American artists with an ongoing theme of nature.

“Many English homes tend to incorporate representations of nature into the interiors,” says Shelley. “One of my favorite pieces is by Paul Lange from his “Big Blooms” series which I originally saw displayed at the Chicago Botanic Garden. It brings me great joy every time I catch sight of it.”

“They are very dark and graphic representations of the Shropshire landscape,” she says. “ I fell in love with them and purchased them but then decided to find out a little more about the artist. It turned out that he had been the art teacher at my alma mater for many years.”

Dann-Fenwick says it’s been fun working with Shelley because it gives her a chance to step outside the traditional English design stereotype of Downton Abbey and the stately historic homes Americans read about in UK Town and Country.

“To me, English style is all about understated or restrained elegance and comfort—both physical comfort and the comfort that comes with being surrounded by things that speak to you, reflect your personality, your travels, your interests, or have some history and meaning,” says Dann-Fenwick. “For example, Sarah had a vintage and quite formal secretary desk in her living room which she wanted to keep. I paired it with an animal-hide cube ottoman to bring it up to date and ‘dress it down.’ It is a way of making high style pieces feel less stuffy.”

Throughout the project, Dann-Fenwick worked with Shelley to customize every detail, whether it was accommodating a large piece of art or making the home cozy for the family’s two dogs.

To give the contemporary home a more graceful feel, crown molding was added to several rooms. In true English fashion, window treatments are a key part of the design of every room.

“Many of the fabrics I have used in the house are British from designers such as Timorous Beasties, a fabric which is unique and boundary pushing in style. One of the fabrics we used incorporates a design of British urban and rural scenes,” adds Shelley. “Tina has then taken these fabrics and worked with local furniture makers to create pieces that combine both the British and American heritage.”

Another very American (and very local) addition to the mix was a large 3-D wire sculpture by Highwood artist Carolyn McMahon.

“I have always loved Mark McMahon’s work. When he opened his gallery in Highwood, I went in to look at the pieces that his father, Franklin, had worked on for NASA. I saw the piece by Carolyn on the wall and just fell in love with it,” says Shelley, adding that one of the best parts working with Dann-Fenwick has been watching her home come to life and evolve. “Each time we finish a project, I think ‘this is it, this is my favorite’ but then we will do another project and I will have a new favorite space. I love every room that she has worked on and really look forward to coming home.”

What does the Shelley home look like for the holidays?

“I love Christmas and really do have great fun decorating. Most of the English traditions are through our food. My mother is a fantastic cook and at the age of 87 she still occasionally cooks for large country house parties in England,” says Shelley. “ The last Sunday before advent is the day I make the Christmas puddings. And, of course we always watch the Queen’s speech on Christmas Day.”