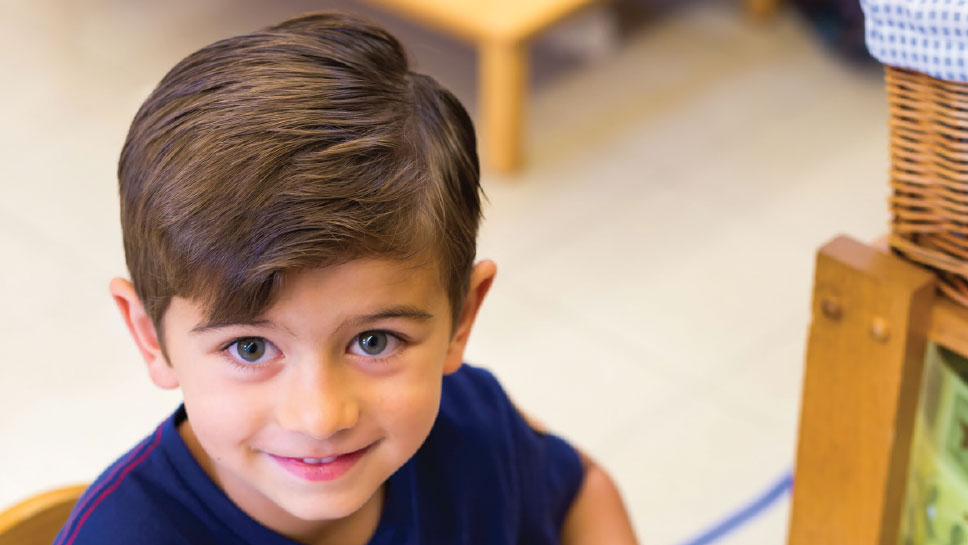 A curriculum focused on self development and academics instills a lifelong love of learning. PHOTOGRAPHY BY ROBIN SUBAR

“At the Montessori School of Lake Forest (MSLF), we’re teaching the whole child,” says Kathleen Marino, Director of Development at the school.

This concept is at the heart of the school’s mission. It aims to cultivate a lifelong love of learning in children through inspiring them toward their full potential, both intellectually and socially.

This is achieved through a unique curriculum and classes where children are grouped in three-year age ranges. Children work through a cycle, going from lesson to lesson with the freedom to work on projects at their own pace.

“They can take as much time as they need to work on things,” says Carolyn Lanni, a primary teacher at MSLF. “This is a big change from the typical classroom, where a teacher tells you how long you have to work on something. Sometimes a child only needs 15 minutes to complete addition problems, sometimes they need two hours.”

The primary Montessori curriculum is based on the child’s development, with five areas of focus. There’s Practical Life, which starts at three-years-old. Here, children learn how to take care of themselves–things like zipping, buttoning, and hand washing, as well as how to take care of their environment through sweeping, folding laundry, and watering plants. In the Sensorial stage, children classify their sensory experiences. This includes exploration of colors and understanding shape and dimension, for example, which is important in grasping mathematical concepts later on.

“We really want them to understand the concept, instead of just memorizing facts to get a good grade on a test,” says Lanni.

This is especially true when it comes to math, where the curriculum focuses on the concept before the numbers. Children start with physical pieces, like beads or blocks, and put them together to add. Ten beads combined with two beads equals twelve, for example. Once they have the concept down, teachers show them them what the number 12 looks like in written form. With larger items, Lanni notes that there’s a clear difference in the weight between 10 and 100 blocks, which is helpful for young children who are in a sensitive period for learning with their hands and through movement.”

“Many materials are in groups of ten, and they’re taught to carry each piece of the material one at a time to their table,” says Marino. “It’s a very kinetic way to learn, so when they finally are ready to sit down and work they’ve done all this physical movement and can really focus.”

Having students of varying ages in the class reinforces the material. Take a group of three to six-year-olds, for example.

“The three-year-olds are overhearing the six-year-olds do multiplication and division, and those six-year-olds are helping the three-year-olds fold laundry,” says Lanni. “The younger children are indirectly prepared for later work, and the older children are solidifying their understanding by teaching others.” This also helps the teacher. Lanni, who previously student-taught second grade at a traditional school, says from a teaching standpoint there was always time wasted because everyone was forced to do the same thing at the same time. Some kids were ahead, and it was a waste of their time to sit through the lesson, while other kids were behind and found it hard to catch up.

“In our environment, everyone is on their own path and moves on to the next lesson when they’re ready. They’re always doing something constructive and I can bounce around and better meet everyone’s needs,” she says.

The freedom to work at their own pace and fully embrace a concept before moving forward is what helps Montessori students cultivate a love of learning. A curriculum based not only on academics, but also self-development, respect, appreciation of the natural world, diversity, and community, is what the school focuses on in order to teach the “whole child.”