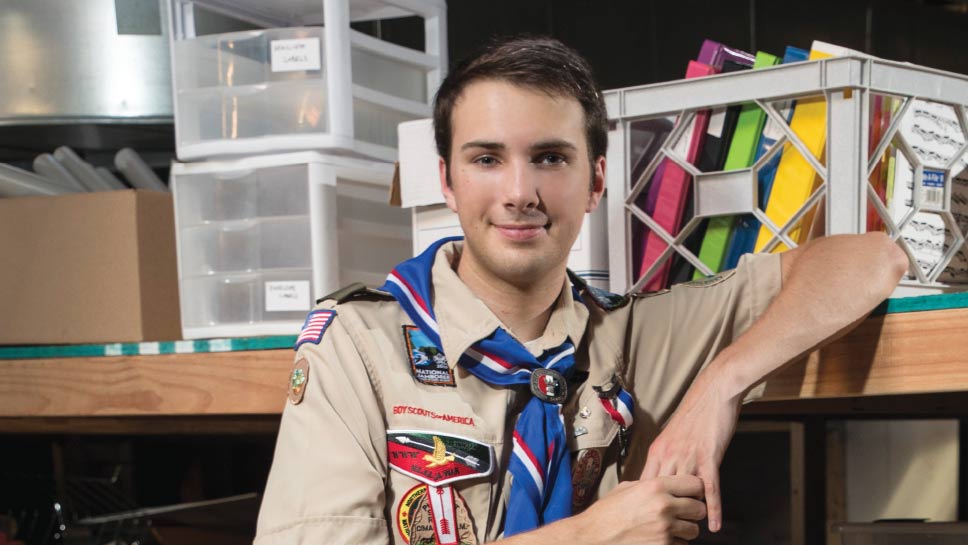 Lake Forest’s Alec Brandel turns to the heart of the community and chooses Gorton Community Center as the beneficiary of his Eagle Scout project. PHOTOGRAPHY BY JOEL LERNER

Lake Forest’s Alec Brandel, a 2017 graduate from Lake Forest High School, grew up in a family where giving back to the community was just part of his everyday life. Involved with the Boy Scout organization since the second grade, it was inevitable that Brandel would see his journey through all the way to his Eagle Scout Award, something he’d heard stories of his maternal grandfather achieving.

“My mom, brother, and I had volunteered at different times at Gorton Community Center throughout the years,” says Brandel, who spent this last summer as a program intern at the community center. “When it came time for me to decide on a plan for my Eagle project, Gorton seemed like the place to do it. Gorton is truly a place that brings the whole community together.”

Brandel met with Brenda Dick, the executive director at Gorton in 2014 when he was considering what to do for his project. “Brenda was amazing and shared tons of ideas with me—any of them would have made a great project,” he says. “But then she suggested we go take a look at the attic. When we walked through the door, I knew that was my project.”

He is gracious in his description of Gorton’s attic when he said it bordered on “disaster.” For years, in spite of the best efforts of many, Gorton and the nonprofit organizations it hosts had been stock-piling boxes, papers, and memorabilia of all kinds just below the roofline.

“There were some shelves being used in the attic, but there definitely wasn’t enough storage,” he says. “And there was no organized way to prevent people from storing things close to the sprinkler system which is a fire hazard.”

So Brandel quickly went to work on designing a shelving system that could organize Gorton’s attic space. “The fear with an Eagle project is that when you’re proposing your ideas that they won’t be big enough,” he remembers. “That really wasn’t a worry for me because there was plenty to for me to do.”

With slanted ceilings and poles to work around, Brandel began to hand-sketch three-dimensional drawings that would illustrate his plan. “For me, that was the toughest part. I had taken a CAD class at the high school so I had no trouble visualizing what these shelves would look like. But translating these ideas into hand-sketches was tough.”

But the work paid off when Gorton and the Eagle Scout counsel signed off on his proposal. It wasn’t long after this that he was presenting his project to the local Rotary Club who quickly gifted him $400. A member attending personally offered him another $100 to cover his expenses.

With money in his pocket, and a set of plans in his hands, Brandel and his father set off to Home Depot to purchase the materials.

“That may have been the most nerve-wracking moment of the whole project,” says Brandel. “Being a relatively new driver and having to make the drive home from Vernon Hills with just a couple of bungee cords holding the wood in the back of my car, I was very nervous. I was never so happy to pull into my driveway.”

With an intricate lettering and labeling process, Brandel, his father (who manned the saw), and four volunteers began to cut and label the wood. Then over the December 2015 winter break from school, Brandel and his team brought the wood and metal braces up into the attic and assembled the shelving over a four-day process. “After 18 months of planning, it was a bit of a surprise that it all came together in just four days. But the labeling process that I’d spent so much time on was worth it in the end.”

As a final touch, Brandel and his cousins created a twine netting that they laced over the top shelves so that no one would be tempted to put items on the forbidden upper shelving. “I was so proud of what we were able to do and Gorton was thrilled,” Brandel says.

The icing on the cake was Gorton allowing Brandel to have his Eagle Scout ceremony in the Stewart Room at Gorton on his birthday, at the end of May. “It was such a special moment in my life and even more so that I could take people up to the attic to show them my work,” he says. And as one last thank you, Gorton had a plaque made forever commemorating Brandel’s work on the attic shelving.

This August, Brandel will take his place among the freshmen class at Michigan as a mechanical engineer. “My future major isn’t directly linked to my Eagle project, but I did learn a thing or two about not procrastinating on big projects. That will serve me well in my engineering classes.”