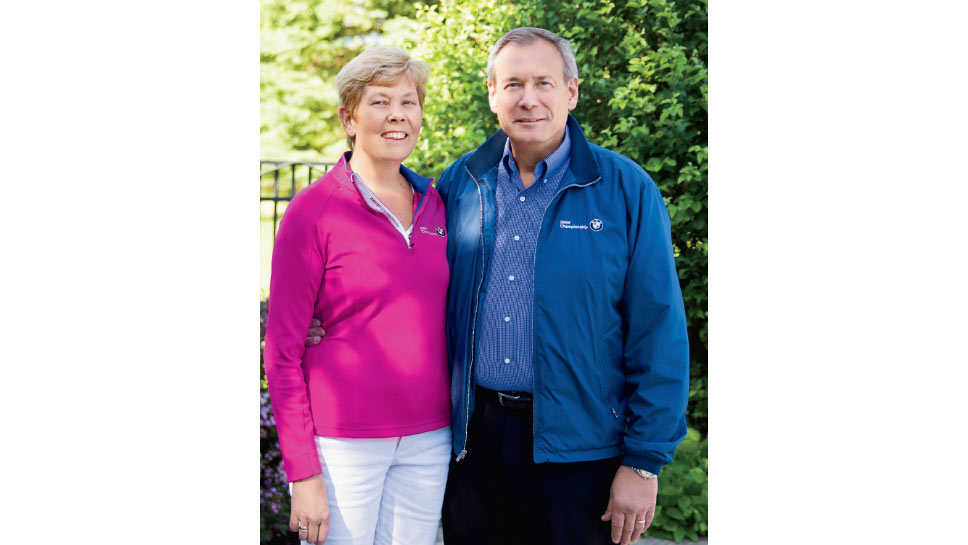 Lake Forest’s Brad and Janilee Ihlenfeld tee up as volunteers at one of the PGA’s premier events—the BMW Championship—coming to Conway Farms this September. PHOTOGRAPHY BY ROBIN SUBAR

Janilee Ihlenfeld has a long history of giving back to the community.

“When my children were little and at Everett, I would help there as much as I could,” Ihlenfeld says. “I did this until they graduated from high school. I just loved it.”

Although her children have since graduated from the local schools, Ihlenfeld has found new outlets to donate her time—one of her favorites being the BMW Championship. The BMW Championship is the penultimate event in the PGA TOUR’s FedExCup Playoffs, with the top 70 PGA TOUR players competing for an $8.75 million prize, including $1.53 million for the winner. Former champions include Jason Day, Zach Johnson, Rory McIlroy, Justin Rose, Dustin Johnson, and Tiger Woods. The BMW Championship will return to Conway Farms Golf Club in Lake Forest for the third time this fall from September 12 through September 17.

“When the championship was first here several years ago, I decided on a whim to volunteer,” Ihlenfeld explains. “I’ve golfed all of my life, I really enjoy the sport, and I thought it would be a fun experience. It was so great that while I only was required to work a couple of shifts, I went every day. It was that much fun.” Ihlenfeld’s enthusiasm was so contagious her husband Brad took time off from work to join her as a volunteer.

“The championship is such a well-oiled machine and being a volunteer gives you the chance to see what happens behind the scenes to make it all work,” she adds. “I’ve worked in the ticket office which is the first point of contact that guests have with the BMW event. I was very busy there but felt that everything they asked me to do was meaningful. As much as I loved to watch the players, I was just as happy greeting the visitors as they came in.”

All proceeds from the BMW Championship benefit the Evans Scholars Foundation, which awards full tuition and housing college scholarships to deserving caddies from modest means. Since 2007, the event has raised more than $24 million for Evans Scholarships.

“Some days when I’d be working at the event, I’d pay to park my car at the west Lake Forest Train Station and walk over to Conway,” Ihlenfeld shares. “Sometimes it would still be dark. But as I’d get close to the golf course and the sun would be coming up—the landscape was so beautiful. Absolutely peaceful.”

It takes more than 1,700 volunteers to make the BMW Championship come to life. Golf fans interested in volunteering at the 2017 BMW Championship are encouraged to sign up soon. Volunteers perform key tasks inside and outside the ropes during tournament week, from welcoming thousands of patrons each day, assisting corporate hospitality guests, and selling apparel in the event’s merchandise tent.

Volunteers must be at least 18 years old and commit to working at least three shifts during tournament week. Shifts range from four to six hours in length, depending on assignment. Volunteers are asked to purchase a volunteer package for $98. Valued at $293, the package includes: a Peter Millar golf shirt, a Peter Millar outerwear piece, a BMW Championship hat or visor, a BMW Championship commemorative pin, two one-day tournament round grounds tickets, one volunteer credential, valid for entry all week, one invitation to the Volunteer Appreciation Party, and food and beverage vouchers.

“It might sound a little crazy to have to pay to volunteer, but if you love golf and you enjoy working with people, it’s the best money you’ll spend this fall to give your time,” Ihlenfeld adds.

To volunteer or to view descriptions of each of the 15 volunteer committees, visit BMWChampionship.com and click on the “Volunteers” tab. The deadline to apply is August 4. Many positions fill quickly, so those interested in specific volunteer positions are encouraged to sign up now.