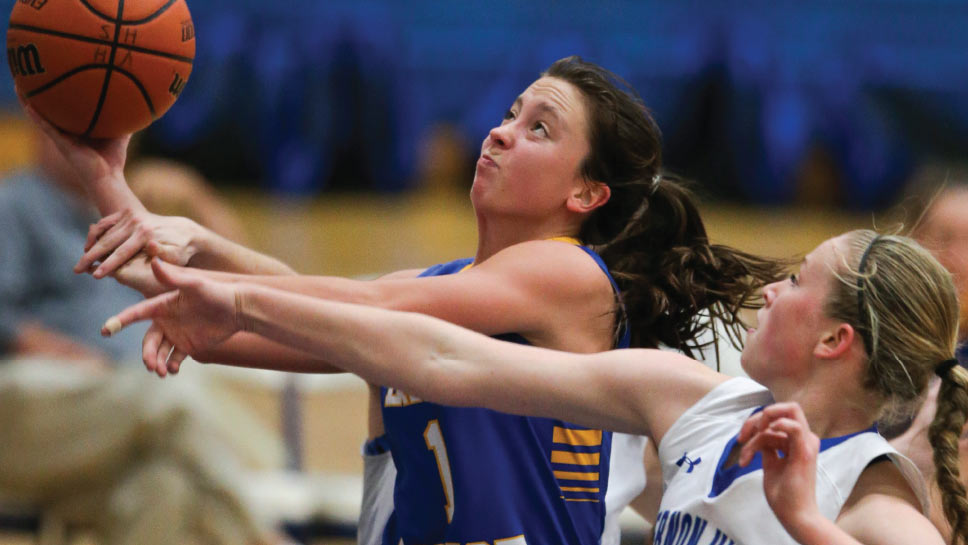 In her varsity basketball debut as a freshman at Lake Forest High School in 2013, Delaney Williams—with the ball in her possession—took four steps on the court.

One problem: The point guard did not dribble the ball at any point during the brief journey.

The sound of a whistle made her stop.

“The referee,” a chuckling Williams recalls, “finally called me for traveling. I was confused at the beginning of that season, and I didn’t know what I was doing. All I knew how to do back then was use my speed to get back on defense.”

Call Williams—a 2017 LFHS graduate with four varsity letters in basketball and four more in soccer—a super-quick study in basketball. All she did was become the program’s all-time leader in career assists (391) and steals (314), as well as a three-time all-North Suburban Conference (NSC) player and a one-time all-stater (a Special Mention selectee, after a senior season in which she averaged 8.7 points, 3.7 rebounds, 3.2 assists and 2.8 steals per game for the Scouts).

“I was fortunate enough to have her in one of my classes in her freshman year,” says Scouts varsity basketball coach Kyle Wilhelm, also a math teacher at the school. “I knew Delaney was a very good soccer player, and I’d seen her play some feeder basketball at the middle-school level. I got her to go to an open-gym session. I remember watching Delaney play on that day and thinking, ‘She has what it takes to be our starting point guard.’ All I had to do from that point was convince her to come out for basketball.”

Wilhelm was persuasive enough, and Williams—after initially thinking basketball was “just a fun thing to do”—ended up willing to do whatever it took to go from raw hoopster to college basketball recruit. The 5’5” Williams intends to play basketball at Wittenberg (Ohio) University in her freshman year and might become a two-sport athlete (basketball and soccer) during her sophomore year.

“Delaney was a player who pretty much led without words in her first two seasons,” Wilhelm says. “She demanded a high level of play from her teammates with the way she played. It was like her passion, her intensity on the court, said to everybody around her, ‘You had better step up your game, because anything less would be a disservice to our team.’”

“She became a gym rat,” the coach adds. “There were times, after a practice or a game, when she’d work on her shooting with me in our gym, and I’d have to say to her, ‘Delaney, we have to stop now because I have to go home.’”

Williams felt right at home on soccer pitches from the moment she played in her first varsity match as a freshman. An offensive-minded midfielder with a penchant for wearing out defenders and goalkeepers, Williams played for Lake Forest High School’s Class 2A state championship squad in 2014 and struck for four goals—in a mere 10 minutes—in the first half of a 5-0 victory at Lake Forest Academy this past April.

In between those feats?

Williams earned all-NSC and team Most Valuable Player honors as the Scouts’ Golden Boot winner (most goals) in her junior season.

“That she doesn’t play soccer year-round, and with how successful she has been every season, is a testament to Delaney’s athleticism,” Scouts varsity soccer coach Ty Stuckslager says. “Three of those goals in that four-goal match were scored with her non-dominant left foot, after she had one-touched the ball each time to control it. Growth … that showed me growth; her shot has improved considerably from the start of her junior season.”

Delaney Williams today is nothing like Delaney Williams circa 2013. The older teen sang songs at the top of her lungs on bus rides to road soccer matches. The younger teen barely spoke around her varsity teammates more than three years ago.

“I said two words my freshman year,” admits Williams, who plans to major in either sports medicine or exercise science. “Before the start of my sophomore year, Wilhelm told me I had to start talking more, had to be more vocal as a point guard. I understood that. My senior season in soccer, I liked to jam out on the bus before games and try to get my teammates motivated through music.”

Her sure-fire way to inspire teammates throughout her final prep basketball season—when the Scouts won 23 games and captured a Class 4A regional championship—involved courage and hustle. Two or three times per game, Williams established her ground on hardwood on the defensive end of the court and took a charge.

Most collisions left her with either a floor burn or a bruise.

“But she always popped right back up and gave a fist pump. I got goosebumps each time she did that. Those moments were often game-changers. You could see how her abilities in each sport helped her compete and succeed in the other; both basketball and soccer require you to jockey for position and have the awareness of knowing when it’s best to deliver a pass,” Wilhelm says.

“But what made Delaney such a wonderful teammate in our program was her constant energy and positivity—both are infectious qualities. I consider myself beyond lucky to have been able to coach Delaney.”