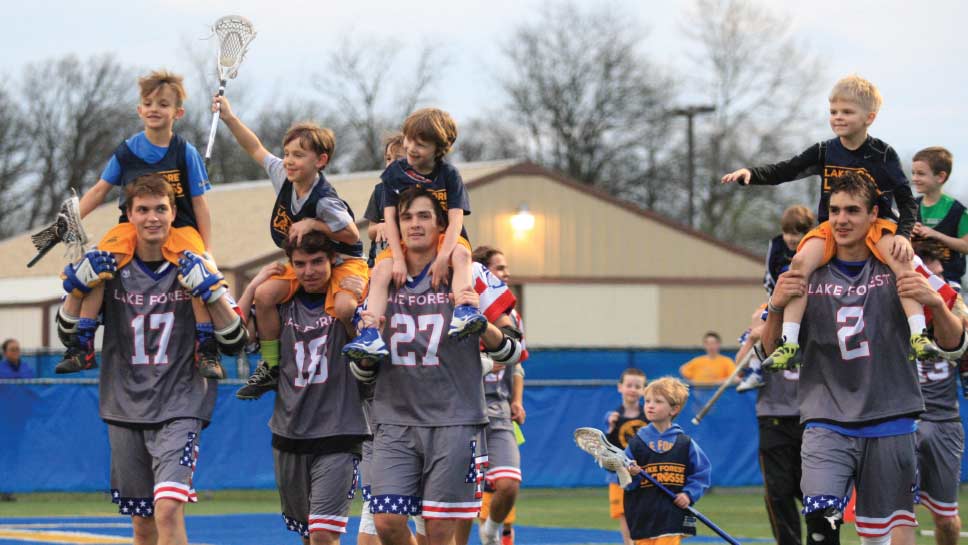 Interest in lacrosse continues to surge in Lake Forest and Lake Bluff.

Lake Forest Lacrosse Association (LFLA) boys surrounded Wes Janeck on a field last spring. The LFLA alumnus and 2015 Lake Forest High School graduate had returned to his roots — as a hero, as a University of Maryland freshman middie who had played in every game for the Terrapins’ NCAA runner-up squad in 2016.

“Wes was wearing his Maryland helmet and gloves and came out to help our [LFLA] kids,” recalls Marc Thiergart, an LFLA board member and the boys’ varsity lacrosse coach at LFHS. “It’s amazing, a player from the Midwest playing as much as Wes did for a lacrosse power like Maryland. The boys in LFLA (kindergarten through eighth grade) get excited about being a part of the lacrosse culture in Lake Forest and Lake Bluff, and then the excitement level goes up when they watch the high school team compete.

“You should have seen the little ones, going up to Wes and asking for his autograph,” Thiergart adds.

Youngsters continue to sign up in droves for spots on LFLA teams. When the nonprofit organization started in the spring of 2011, it fielded one team and about 15 boys. This spring’s projected numbers: 12 teams and nearly 200 boys, including those expected to participate in the association’s Learn-2-Lax program.

“Players get to play lacrosse with their friends and advance to higher levels by learning the game from great coaches who know how to teach the sport,” LFLA President Corey Tobin says, adding every adult involved with LFLA is a volunteer. “Ensuring player safety is one of our board’s philosophies, as well as developing good sportsmen. The kids set goals and work hard to achieve them—just like they’ll do later in life. Many of the kids in our program have fathers and mothers who played at Lake Forest or at other high schools. It has been great seeing parents pass the sport down to their kids and solidifying our club as a part of the Lake Forest and Lake Bluff youth sports fabric.”

Justin Smith, a 1993 LFHS graduate, is an LFLA board member and the father of 7-year-old Bo, an LFLA middie. The former Denison (Ohio) University lacrosse goalie is also the owner of The LAX Shop in Bannockburn. Only 13 high school boys’ lacrosse teams existed in Illinois when Smith was a senior at LFHS.

“It’s experiencing massive momentum,” Smith says of LFLA and the sport of lacrosse in Illinois. “The kids love the fast pace of lacrosse and the brotherhood aspects LFLA promotes. Our organization is well-organized and structured, and we like to emphasize communication and teamwork; kids in our program aren’t chasing dandelions.”

Smith was an eighth-grader when the Hutchen family moved from Long Island in New York to Lake Forest. All five of the Hutchen boys had played lacrosse on the East Coast.

“One of the Hutchen boys threw a lacrosse stick to me, and I loved the sport right away,” says Smith, who played on Lake Forest High School lacrosse teams that battled Glenbrook North High School teams in the early 1990s.

The LFLA serves as a feeder program for Thiergart’s program at LFHS, meaning grade-school lacrosse players are learning lacrosse lexicon and the high school’s plays well before they become high school student-athletes.

“Our program has a 90-percent return rate,” Tobin says. “The kids stick around. They want to get better, they’re willing to work hard, and the younger ones like to intermingle with the older ones, who love to teach moves and a few tricks.”

One of the most moving scenes of the spring season last year occurred on Youth Lacrosse Appreciation Night in Lake Forest. At halftime of the Evanston-Lake Forest High School boys’ lacrosse game, many of the Scouts’ varsity players—minus their sticks—paraded across the field. Some of Thiergart’s Scouts had developed as lacrosse players under the guidance of LFLA coaches. On the varsity players’ shoulders clung beaming LFLA players, with a couple of them thrusting their lacrosse sticks in a triumphant pose.

Does it get more uplifting than that? 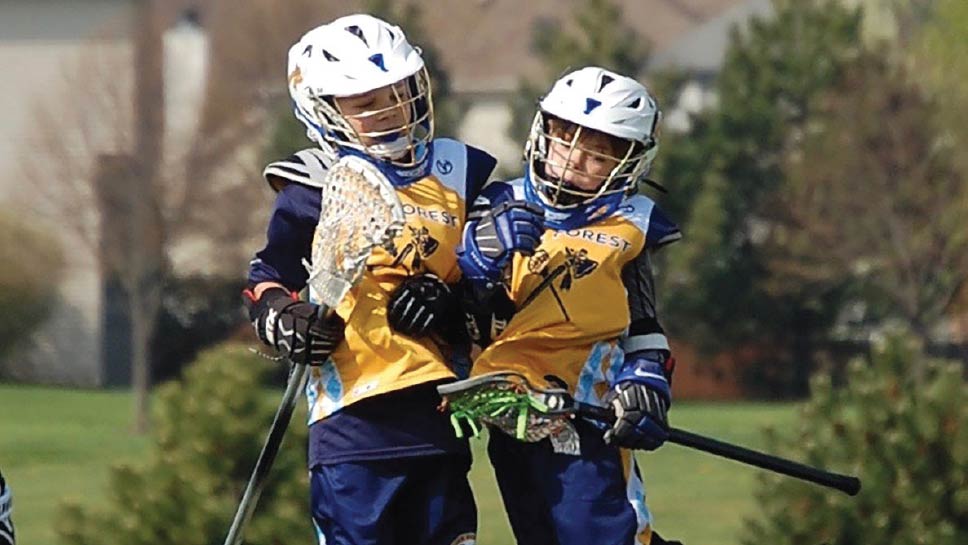