It might go down as one of the more unusual rallying cries in sports. But Lake Forest High School senior swimmer Wyatt Foss chose it—“April showers bring May flowers”—and exhorted his teammates to get behind it before a practice in January.

Watt’s reasoning demanded an explanation, and he was more than happy to reveal it. 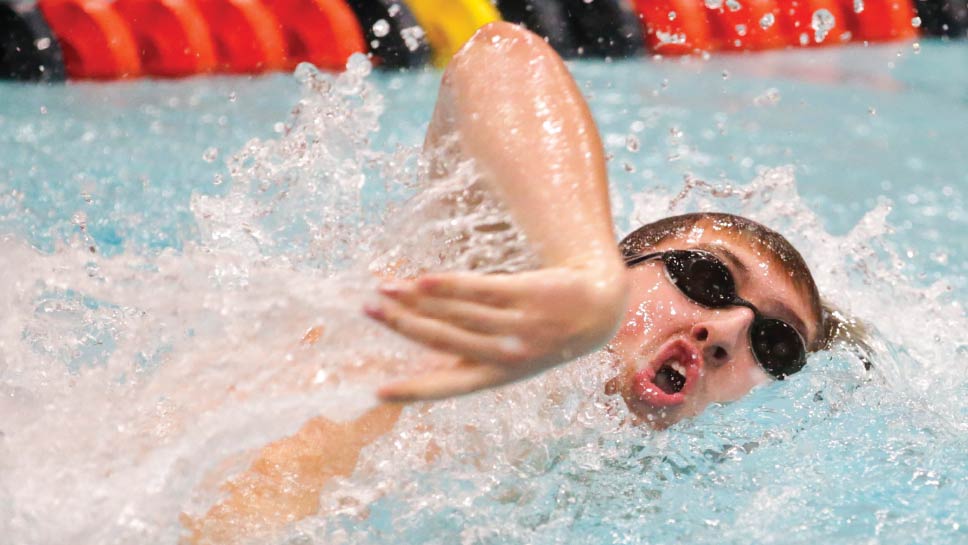 “I wanted to pick a saying that everybody knew and then apply it to the sport of swimming,” says Foss, a Lake Bluff resident and four-year varsity swimmer.

The gist of his comparison: “showers” represent the demands of the sport, including the interminable, painful practices in the middle of the season and the sound of a swimmer’s alarm clock that beats the sunrise before each practice.

“The tough and unpleasant parts of the sport are like monsoons or typhoons, rain and wind everywhere, relentless conditions,” says LFHS swim coach Cindy Dell, who was thrilled Foss had selected what originally was a short poem — “Sweet April showers do spring May flowers”—penned by Thomas Tusser in 1157.

“The ‘flowers,’ ” Dell adds, “come later, in the form of season-best times or helping the team win a relay or a big meet. The boys who work hard and persevere usually get rewarded in the end.”

Foss collected his most beautiful ‘flower’ to date at a sectional in the home water last winter, when he served as the lead-off leg for the Scouts’ 400-yard free relay. The quartet also included current senior Kevin Donahue, Michael Hambleton (a Class of 2016 graduate), and Dylan Boyd, who transferred to North Carolina before the start of his senior year.

“I wasn’t even sure we’d qualify to the state meet,” recalls the 6-foot-3, 190-pound Foss, one of four captains this year.

They didn’t just earn a state berth with a time of 3:11.58 on that February afternoon in 2016; the foursome pared 13 seconds off its seed time — and won the event.

“A lot of jumping up and down after that race,” he adds. “A lot of hugs on deck. The camaraderie you get to experience during a high school season is my favorite aspect of swimming. We spend so many hours training together during the three months, and then more bonding goes on during meets.”

They came together for a couple of good causes on Dec. 27, the date on which each Scout swam 10,000 yards in the school’s pool to raise funds for the Great Lakes Adaptive Sports Association and the Max Schewitz Foundation. One of the latter organization’s missions is to identify—through free heart screenings on campuses—high school students who are at risk of sudden cardiac death.

The LFHS boys swimming and diving program also spent a Winter Break afternoon to complete a project for Feed My Starving Children.

Foss’s primary passion out of the water is playing the electric guitar. His mother, Lynette, introduced him to music at the age of 2. Little Wyatt heard The Beatles, and the budding musician in the household eventually played the piano for two years.

He is in his ninth year as a guitarist.

“Wyatt can play the guitar like no other,” Dell says of the three-time LFHS Talent Show performer. “When I think of Wyatt [the musician], I think of The Eagles, a band that is a favorite of ours.”

The school’s Talent Show took place on Feb. 24 — earlier than usual. This year’s state swimming and diving meet started on Feb. 24 and ended on the next day.

For Foss, it was an easy decision. (He would attend the state meet, either as a qualifier or as a teammate cheering for his teammates.)

The son of a former volleyball player (Lynette, at a high school in Michigan) and a former gymnast and shot putter (Robert, a Glenbrook North graduate), Foss tried tennis, soccer, volleyball and baseball before opting to stick with swimming.

“My first race was a simple one, either the 50 freestyle or maybe it was the 100 freestyle,” says a Foss, a Lake Bluff Park District swimmer before becoming a Lake Forest Swim Club Duck. “I remember liking it right away.”

“Wyatt attacks the front end of races really well, and we’re working on his finish at the end of the 200 free,” Dell says. “He’s driven, a student of the sport. Loves the sport. I also think of heart when I think of Wyatt. Wyatt has one of the biggest hearts I know. And when you’re around him, you notice so much humbleness.

“Wyatt has always been all about the team,” the coach adds. Dell has something to do with that mindset. The program’s culture she creates for her boys each season begins and ends with the way she communicates with each swimmer. Plus the process of progressing as a competitive swimmer—as a Scout battling for his teammates—matters more to her than the times on the scoreboard. Or the shiny medals.

“We’re all humble, because of Cindy,” Foss insists. “Cindy treats everybody on our team equally. It doesn’t matter if you’re the fastest swimmer or the slowest swimmer or anybody in between; Cindy looks at you and sees a swimmer.”