In and around Lake Forest and Lake Bluff, there are familiar faces we can always count on to be there with a warm smile, curiosity about how we’re doing, and a genuine desire to see us again. Egg Harbor’s Jill Johnson is exactly this person—and has worked her way to be the face of the restaurant nearly every day, between the hours of 6:30 a.m. and 2 p.m., for the last 30 years.

“I really can’t believe it,” says Johnson humbly of being one of the longest-term employees of Egg Harbor, at one time having to wake up at 3:30 a.m. to make it to work on time for her shift. “My time here has been so happy and gone so fast.” 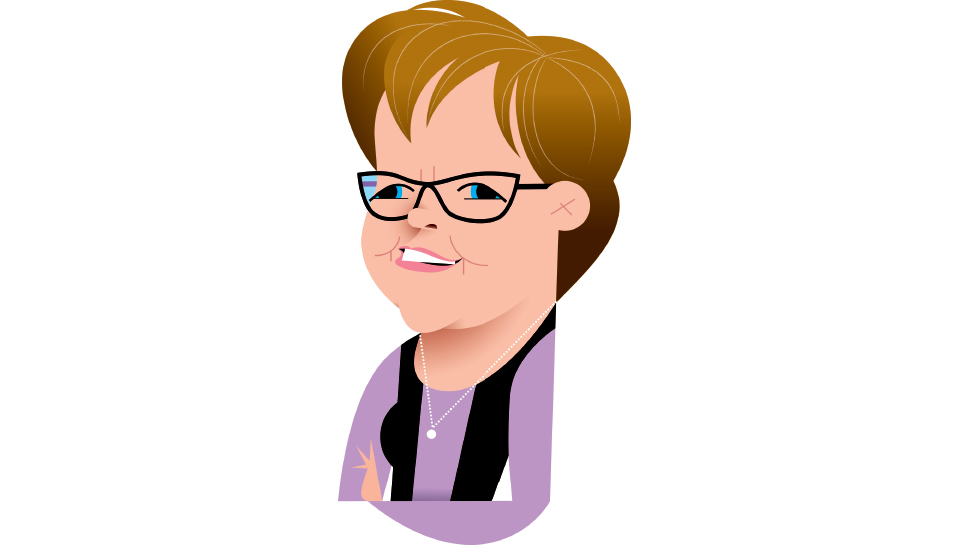 Egg Harbor’s Jill Johnson can hardly believe she’s been helping us start our days out right for the last three decades. ILLUSTRATION BY KIRSTEN ULVE

Johnson came to Lake Forest’s Egg Harbor shortly after it opened in the late 1980s, the second of 20 locations the restaurant chain has launched across three states—Illinois, Wisconsin, and Georgia. She began as a server and people remember her best as being able to take orders without ever writing anything down.

“I don’t think I could do that anymore,” laughs Johnson, “but in the day, I could manage a table with six or eight people and remember everything they asked for. I realized I paid better attention to who the customers were and what they wanted if I just listened to them. It makes me feel good when former regulars come back to the restaurant and ask me if I still remember what they used to order. It’s funny how often I do.”

Johnson came to Egg Harbor with customer service running through her veins. Her mother had been a server, despite having nine children at home. (Johnson has a twin named Jack—the jokes of “Jack and Jill” are never lost on her.) When Johnson was first employed by Egg Harbor, she was juggling it with jobs at two other well-known eateries in Beach Park, the village where she has lived most of her life.

“My husband and I worked it out that so that one of us was always home with our kids,” she says of once managing the schedules of three young children. With the kids all grown up, Johnson has cut back on how much she works, now solely focused as the floor manager at Egg Harbor and the grandmother to grandchildren she adores.

Although it’s against restaurant policy to call out celebrities for an autograph or selfies when they come to dine, there were a few occasions where Johnson felt the need to bend protocol a bit.

“There was one day where Loretta Swit sat down at one of my tables and I wanted to die,” Johnson recalls, having kept her cool as she took the M*A*S*H star’s order. “I was a huge fan of hers—and the show. When she left, I had to follow her out and let her know much I appreciated her.” Other brushes with stardom have included musician Steven Tyler, Hollywood actor John Cleese, cast members of the television drama Chicago Fire, and countless players from the Chicago Bears. “I mean, can you believe that all of those people have walked through the doors of Egg Harbor? I’ve lead a pretty blessed life.”

In addition to loving what she does, Johnson is so proud of Egg Harbor. “This is a company where you can grow and achieve your dreams. They help you do that—whatever those dreams might be. And all our food, no matter what Egg Harbor you eat in, is good and will be delivered to you in 10 minutes or less, and that’s with us changing up the menu four times a year. That’s hard to find, but Egg Harbor really wants to please its customers.”

If Johnson had to pick her favorite food item from the menu, it’s the Protein Wrap, hands down. Three scrambled egg whites mixed with a patty made from quinoa, walnuts, black beans, sunflower, chia and hemp seeds, red pepper, onion, and southwestern spices folded into a gourmet wrap with avocado, tomato, fresh spinach, and melted Mozzarella cheese, served with fresh fruit and a side of Egg Harbor’s homemade salsa.

“Yum! I could eat that every day and never get sick of it.”