Braun starts to run from the Scouts’ 15-yard line. 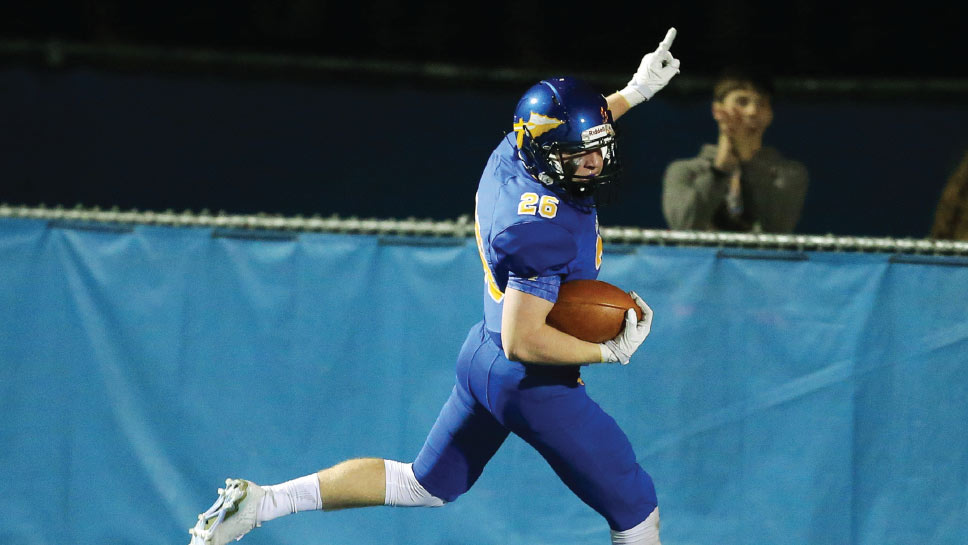 In March of 2015, Christian Braun, a LFHS sophomore linebacker/fullback with scoliosis, got wheeled into an operating room, where he underwent six and a half hours of back surgery.

Not once did he think he would never touch a football again in a LFHS game.

He had never scored a touchdown while wearing a Scouts uniform. He had some eligibility left, two seasons, to do that.

Braun stayed in the hospital for six days after the surgery, performed by Dr. John Sarwark. He returned home a heavier young man. He returned home with a pair of two-foot titanium rods and 14 screws joining 13 vertebrae in his back.

“My mom (Marge) was hesitant about my goal to return to football,” says Braun, who, in a freshman ‘B’ football game against Stevenson in 2013, recorded 7.5 tackles. “But she was OK with it when my doctor cleared me.”

Braun missed the first four varsity games of his junior season. Week Five was Lake Forest High School’s homecoming game against Mundelein High School. Braun entered the game, as a fullback. Christian Braun was back on a football field, playing in a game that counted. The first play involving Braun?

Braun winces while recounting it.

“Zone play to the right,” Braun begins. “I took a handoff and immediately saw the middle linebacker. He destroyed me. I think I lost a yard on the play. I ran another play that night, for maybe two yards.

“It felt amazing to be able to play again,” he adds. “I was fully healthy again. My coaches were happy for me. I was happy.”

A funny moment happened months earlier, when Braun was strengthening his new back in June 2015. He insisted on joining others for a Habitat for Humanity project in Tennessee. His mother, though, was nervous about allowing him to head south on a lengthy car trip.

Braun made the trip. Braun pounded nails in Tennessee. A house in the Volunteer State has his fingerprints on it.

Thrilled for him. Impressed.

“Christian had every reason to quit football, especially after his surgery,” says senior Charlie Reinkemeyer, the Scouts’ varsity quarterback this past fall. “But he kept battling instead, brought it every day in practice. He did tackling drills, scrimmaged hard, gave 100 percent every day. A team player, absolutely. His goal was to make everybody around him better. I remember one day at practice, a teammate was struggling to finish a sprint. There was Christian, running alongside his teammate, pushing him physically and mentally to finish that sprint under a certain time. It was a great scene.

“At the end of practices,” the QB adds, “we’d all shout, ‘1-2-3 Scout Pride!’ There is no clear definition of Scout Pride. But we all know it when we see it. Seeing Christian on a football field was a tremendous example of what Scout Pride is all about.”

Braun went out for football as a freshman at LFHS because he knew he’d make scores of friends in the month before the start of classes. He had played football at The School of St. Mary in Lake Forest. His class size in the eighth grade was 53, the equivalent of an NFL’s active roster on Game Day.

Braun’s favorite NFL team is the Chicago Bears. He ran into former Bears linebacker Brian Urlacher at a local bowling event. He told Urlacher, “You’re my favorite Bear.” Urlacher glared at the Bears jersey Braun was wearing that day. It was a No. 8, former quarterback Rex Grossman’s jersey.

“Then why,” Urlacher snapped jokingly at Braun, “are you wearing that?”

Back to Braun, in the summer of ’13, Day One in his life as a Lake Forest High School gridder. Most of his football buddies at The School of St. Mary had enrolled either at Loyola Academy in Wilmette or at Carmel Catholic High School in Mundelein.

“The coaches [at LFHS] were welcoming,” Braun — an only child, an Eagle Scout, a straight-A student, a future mechanical engineering major — recalls. “I got to know many of my new classmates. You have to start all over in high school. Going out for football helped me get off to a good start.”

The doorbell at the Braun house rings. The family dog barks. Christian Braun is home from the hospital on a school day, recovering from his back surgery two springs ago. Christian’s father, Mark, opens the front door. Braun hears LFHS varsity football coach Chuck Spagnoli’s voice. Spagnoli had escaped from his office at the school to deliver a case of protein shakes to Braun. Braun gets out of bed to greet his coach.

“I hurried … slowly to say hi to him,” Braun recalls. “To see Coach, to realize that he had taken time from work to drop off that case for me — I felt elated. He told me, ‘Great to see you up and moving.’ ”

Lake Forest High School opened its 2016 football season with a 30-6 win at Glenbard East on Aug. 26. Christian Braun, senior, wore No. 26. Braun saw action in three regular-season games before that home game (a 49-7 win) against Waukegan. He treated each practice like a starter treated a game: seriously.

“Watching Christian’s will and desire, after facing the adversity he had to face, was awesome,” says Spagnoli, whose 2016 squad lost to eventual Class 6A state champion Prairie Ridge in a quarterfinal. “I was so happy for him. We all were. You watch something like that, and your heart swells with pride.”

… Braun, cradling a football, continues to run against Waukegan players. He nears midfield. He picks up speed. Confusion still reigns — on the field, along the sidelines, in the stands. Did Braun intercept the pass? Did Braun pick up a dead ball? Braun isn’t confused. He can smell the end zone. Thirty-yard line, 25, 20, 15, 10, five … end zone. Braun celebrates. His teammates, arms straight up and jumping, celebrate. The referees huddle. All eyes are on the refs. A ref signals touchdown. It’s Christian Braun’s first touchdown in a Scouts uniform … in the last regular-season game of his football career.

“That was Coach Spagnoli’s touchdown as much as it was mine,” Braun says. “All of us were taught to pick up a loose ball and run, no matter what. We did that in practices. We did that in games. That’s what I did in the Waukegan game.”