It is an early November afternoon, and Lake Forest High School (LFHS) senior Meghan McGrail enters her home in Lake Bluff after school, suddenly realizing she is a former competitive volleyball player. Former? Too sudden. Weird. Volleyball had been her sport, her favorite outlet, her constant, since the sixth grade.

The only good thing about the day after the Scouts’ crushing three-set playoff loss to Stevenson High School’s Patriots is knowing her Chicago Cubs—featuring her favorite player, second baseman Javy Baez—are playing in the World Series for the first time since 1945. 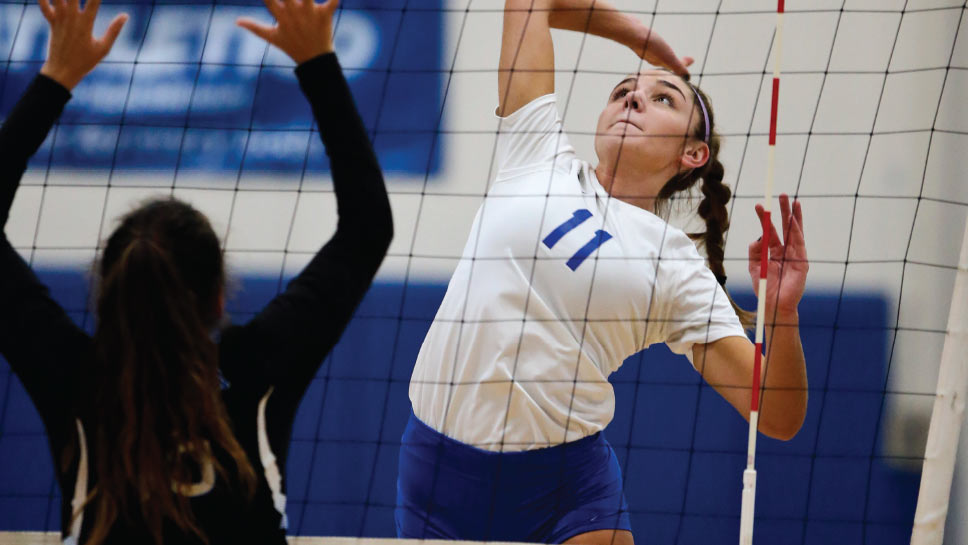 “I baked cookies for my team,” McGrail, an outside hitter in her senior season, recalls, adding she had decorated each treat with a Cubs logo doubling as red-white-and-blue icing. “Our team’s banquet was that night, followed by a sleepover. I had to bake something, anything. I didn’t have anything else to do that afternoon. I’d always watch my mom [Bridget] bake when I was young. She made an extravagant birthday cake for me one year, in the shape of a teddy bear. I’d help her stir in the kitchen, from the time I could hold a spoon. I’d eat cookie dough while watching her bake. A lot of cookie dough. I would get a stomach ache, but it was worth it.”

When one of the main ingredients in Lake Forest High School’s attack, senior opposite hitter Ashley Williams, suffered a broken left wrist (she’s a lefty) in early October, the Scouts turned to McGrail to up her game. McGrail welcomed the challenge—for four weeks. Thrived throughout it, too, particularly on the night of a Class 4A regional final against Lake Zurich High School. McGrail popped for 16 kills in a three-set victory on October 27. Stirring stuff.

“That was tough,” McGrail admits. “It was tough the next day. My mom couldn’t sleep after the match, knowing she’d miss watching us play. She loved supporting us, loved cheering for us. All of my teammates’ parents did.”

McGrail, an all-North Suburban Conference selectee and third-year varsity spiker, finished with 302 kills, second among teammates behind Williams’s 307. The springy 5-foot-8 Scout must have appeared 6-foot-4 to front-row foes, maybe taller. Her total number of digs, 215, represented clear evidence of her versatility. She rocked from the front row, blunted from the back row. Her serving percentage was a dependable 90.9 for a formidable 33-4 team.

“Meghan had to play a more dominant role after Ashley’s injury, and she was willing to assume that, to be a go-to,” Scouts volleyball coach Molly Grzesik says of the former Wildcat Juniors club player. “What people noticed about her game, right away, was how hard she hit the ball, her front-row play. But she was also one of our team’s best passers; you can’t say that about many outside hitters. Meghan practiced and played with determination, an all-out drive. She took her game to a new level in her senior season, doing everything a little better than she did last year. Truly,” the coach adds, “a valuable all-around player.”

McGrail was a soccer player before volleyball became her steady in the arena of athletics. Her good friend and Lake Bluff Middle School classmate, Emma Patlovich, also played soccer. All of those volleyballs, set for McGrail during the 2016 season? Most of them came from Patlovich, bound to amass countless more assists at the University of New Hampshire for the next four years.

“Meghan was a great volleyball player for our program, well-rounded, basically capable of playing anywhere on a court,” Patlovich says. “Her floater serve … insane, the way it barely got over the net. One of the hardest workers I know. Her work ethic, as an athlete and as a student, is the best. She likes to get stuff done.”

The daughter of chemists (Bridget and Frank), Meghan McGrail considers a school day a good day when she completes her homework before the commute home. Her older brother, Patrick, was like that, highly resourceful and organized during his high school days. Still is. He is a junior business major (with a major interest in advertising/marketing) at Miami (Ohio) University, Bridget’s alma mater and a school Meghan is considering.
Patrick played golf and basketball and volleyball at Lake Forest High School. He also found the time to join his little sister for spirited Around the World basketball contests atop the McGrail driveway.

“Patrick inspired me when I was younger, in a lot of ways,” Meghan says. “He was a really good student, super organized, always using folders with labels on them. And being around him was fun. He’s a really good person. He started playing intramural volleyball at Miami,” she adds. “He really enjoys it. After his first day on the court, you know what he told me? He said, ‘I thought of you.’ ”