From the first day the Sisters of Mercy opened the school doors in 1917 to the present, the School of St. Mary has set a standard of excellence. Though white boards have replaced chalkboards and computers have replaced notebooks, one thing has remained constant through the years, a rigorous academic curriculum firmly grounded in the Roman Catholic faith.

Fast forward 100 years and the School of St. Mary is on the precipice of celebrating their longevity and long-lasting impact on the community. 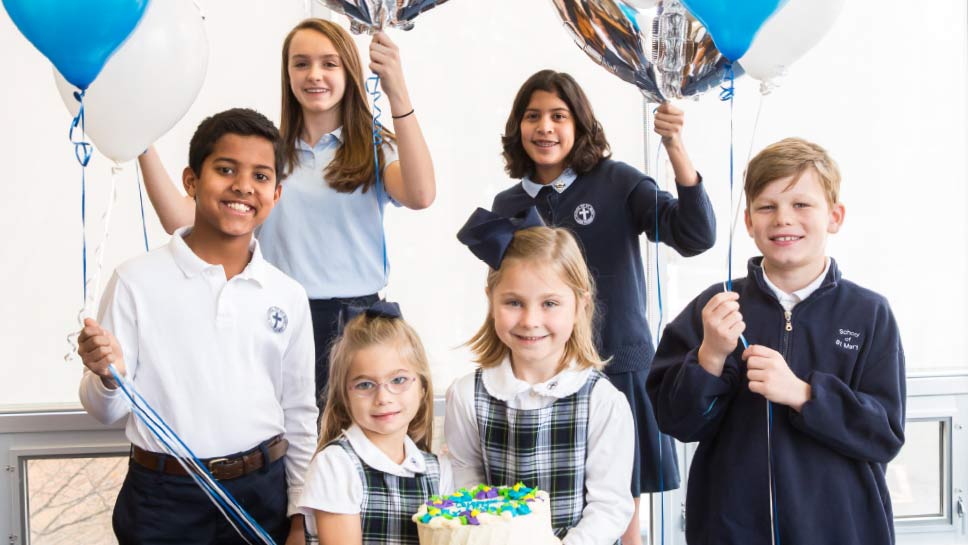 As the School of St. Mary begins its 100th year educating local children this January, plans are underway to commemorate this milestone in the fall. PHOTOGRAPHY BY ROBIN SUBAR

“For most of our students, their relationship with the school doesn’t end with their eighth grade graduation,” says school principal Dr. Venette Biancalana. “We’ve had some of our former students return as certified teachers, and in this our 100th year, we have 30 alumnae who send their own children to the School of St. Mary.”

While maintaining and honoring traditions, the School of St. Mary has continuously evolved. In cooperation with teachers, parents, administration, and university consultants, the curriculum is regularly analyzed for its effectiveness. As a result, programs like Latin, S.T.E.A.M., and hands-on science have been added. Learning and recreational spaces are modern and inviting with recent renovations of the art, music, physical education, and library spaces as well as the playgrounds. Additionally, the social and emotional needs of its students are of primary importance and are addressed though a dedicated curriculum as well as available support staff.

Most importantly, all school activity is accomplished in an environment that fosters faith development and inspires students not only to know but to live Roman Catholic values and virtues. An exacting religion curriculum teaches students the doctrine and beauty of Catholicism, while opportunities for participation in daily prayer, Masses, and prayer services allow students to practice what they have learned. Service opportunities encourage students to put their faith into action, not only while in school but also throughout their lives. From school food drives to entering the Peace Corps, St. Mary’s students past and present have given thousands of service hours locally, nationally, and internationally.

Despite changing times and economic shifts, with an enrollment of more than 500 students, the School of St. Mary remains a vital, vibrant, Catholic educational community.

“We’re living in an era where many Catholic schools are closing or in danger of being closed,” explains Dr. Biancalana. “While we don’t take anything for granted, we are grateful to be thriving.”

The footprint of St. Mary’s has expanded since its inception. “Today, we draw from communities far beyond Lake Forest and Lake Bluff, which has only enhanced the vibrance of our student body,” says Rachel Kuhn, director of development for the Church and School of St. Mary.

Current students at the School of St. Mary will be deeply involved in celebrating their heritage this winter. Beginning at the end of February, grades three through eight will be assigned a decade where they will explore what St. Mary’s and the world were like in that 10-year period. The classes will make a video and share it with the wider student population.

Additionally, students will unearth a time capsule that was created when the School of St. Mary reached its 40th anniversary. They will discover the treasures and then create a time capsule to mark the school’s century milestone.

On September 23, 2017, festivities will culminate with the community being invited to celebrate the School of St. Mary’s 100th anniversary with a mass and a “block-party” family celebration that will be held on its Illinois Road campus.

“At the Church of St. Mary, we have been doing more than waiting to celebrate the last century,” says the Church of St. Mary’s pastor, Fr. Michael Nacius. “Celebrating a century of Catholic education in Lake Forest is reason to give thanks. As we look forward to our next century, we do so with anticipation, excitement, and hope in God’s providence and guidance.”

For more information about the School of St. Mary, visit schoolofstmary.org.