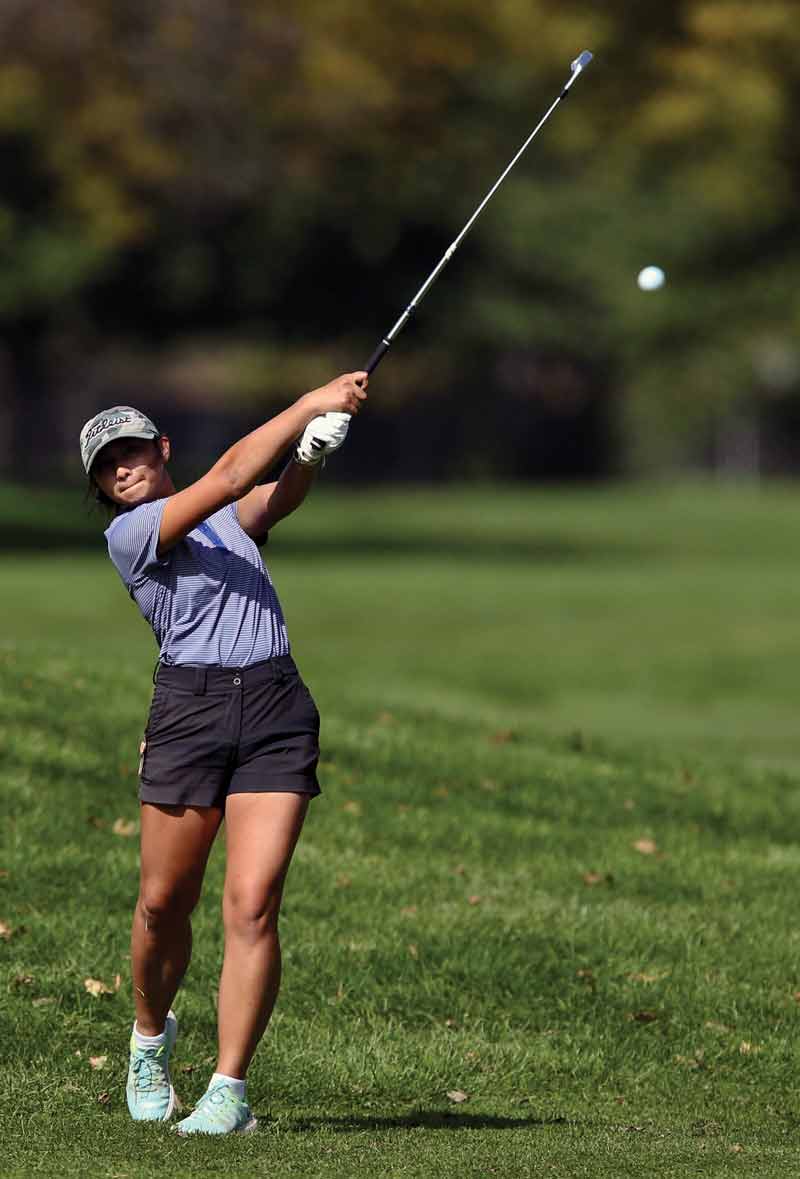 Golf. It was the theme on that spring day in 2013, when loved ones and friends and golf partners had gathered to celebrate the life of Onofre Duque. He was Lena Benjakul’s grandfather.

Lena was an eighth-grader.

“He had developed long-lasting relationships through golf,” Benjakul, now a Lake Forest High School senior, says of Duque, warm and quick-witted. “You’re out there on a course, sometimes for six hours, right? You’re going to become close with other golfers. All of these people at the funeral, his golf friends, talked about how much he loved golf.

Benjakul had not played a round of golf when her grandfather, an Orland Park golf league regular, was alive. Had not taken one swing. In the summer before the start of her freshman year, a forward-thinking Benjakul thought about the start of her journey in a new school. She thought it would be a good idea to pursue an extracurricular activity, while maintaining her commitment to academics. Why not golf?

She approached her parents, Philip and Aileen.

Benjakul’s first round of golf lasted three holes, only three.

“They were a long three holes,” she recalls.

LFHS girls golf tryouts were mere weeks away when she opted to enter a girls junior golf tournament in Deerfield. Golf baptism by … inferno. She had a perfectly good reason for throwing herself into an event filled with seasoned golfers. I wanted to make sure I knew all of the rules of golf before the first day of tryouts,” Benjakul says. “I wanted to know what it felt like to play an entire round. My dad was watching. I hit some good shots, some bad shots. Every time I looked at my dad, he showed support, encouragement.”

Day One of Scouts tryouts arrived. The novice did not just survive the multi-day tryout session, Benjakul made the team—the varsity team. Aileen heard the good news when she picked up her daughter at Deerpath Golf Course. Lena called her father, from the car, to share the good news. A celebratory dinner followed.

Golf became more comfortable during her sophomore season, right along with her spiked golf shoes. She became a fixture at Deerpath Golf Course, sometimes working on her game for eight hours a day, six days a week. Greenskeepers looked up, saw Benjakul. Desk workers and Sandwedge Grill workers looked up, saw Benjakul. Driving-range workers retrieved Benjakul’s drives and waved to her too many times to count. Golf carts and flagsticks and Lena Benjakul. Fixtures.

“Junior season was a turning point for me,” says Benjakul, fairly lengthy off the tee and a steady, laser-focused athlete. “I became more familiar with the golf courses. I wasn’t anxious. My scores started to drop.”

They plummeted some more this past fall, her senior season. Only one Scout qualified for state from the Class 2A Sectional at Buffalo Grove Golf Course on October 10. It was Ono’s 5-foot-3 granddaughter, with a two-over-par 77. The round of Benjakul’s infant life as a competitive golfer advanced her to the 36-hole state meet at Hickory Point Golf Course in Decatur. Lake Forest High School’s co-captain shot a pair of rounds in the 80s.

“A nice culmination to her career,” Scouts coach Steve Johnson says. “I knew, when I first met her, she was relatively new to the sport, but not as new as she was. All that work she had put in, all the time she had spent with her swing coach—it all paid off. That was fun down there, watching her go against the best in the state. She’d worked hard to get there, and I could not have been happier for her.”

“She is very studious, takes all hard classes,” Johnson says of his program’s North Suburban Conference Sportsmanship Award honoree in 2016. “Her priority is academics, always has been, and I know she’s looking into the possibility of marrying academics and golf in college.”

One of Johnson’s favorite moments involving Benjakul on a golf course had nothing to do with a Benjakul shot. Benjakul was paired with another No. 1 golfer, who had been struggling all day. The opponent rolled in a putt, releasing a pent-up sigh of relief.

A couple of syllables. One heartfelt reaction, in the heat of battle.

“Lena being warm and personable,” Johnson says. “Lena never considers a playing partner to be the enemy. She did several things during the round that made the other girl feel comfortable on that day.”

Benjakul addresses a golf ball. Maybe the ball sits on a tee. Maybe the ball rests on a fairway. She takes her club back, and she swings. Whack! Her follow-through is smooth, textbook-sound. She thinks of a certain relative. She senses a presence.

“Every time I play golf,” Benjakul says, “my grandpa [Ono] is there in some way. I didn’t choose golf; golf chose me on the day of a funeral. I will always be thankful for that.”