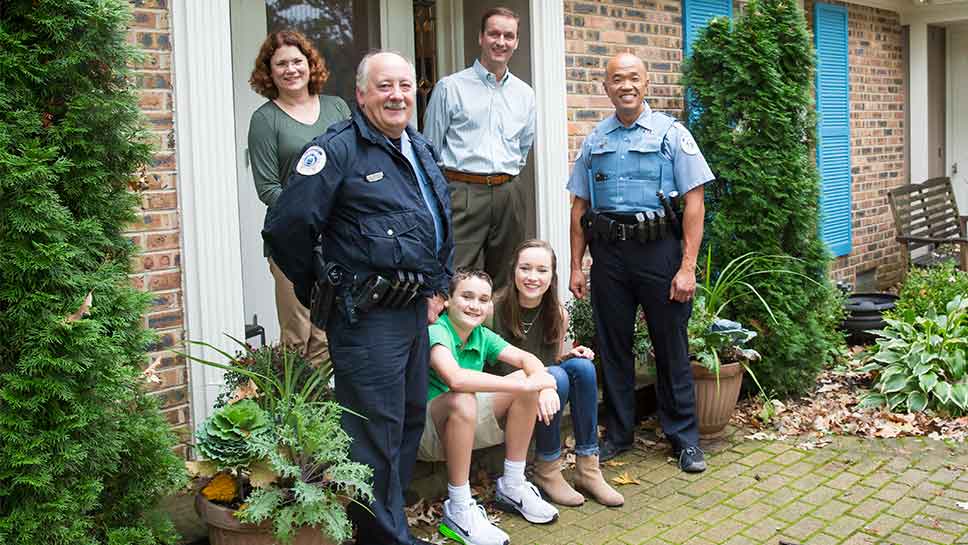 One Lake Forest family shares the support they received from Lake Forest’s police and fire departments when they needed it most. PHOTOGRAPHY BY ROBIN SUBAR

There is so much negative media coverage regarding police across the country that it is refreshing to hear of a positive, uplifting experience in our own town. One local family recently experienced the kindness of multiple Lake Forest Police officers and firefighters during an especially difficult time. “Often when people think of police officers, the first image that comes to mind is arrests, tickets, and of course, keeping the community safe from harm,” says Lake Forest’s Chris Kelley.

In the case of the Kelley family, their interactions with officers of the Lake Forest Police and Fire Departments were invaluable. In 2015, Kelley’s mother began to show signs of dementia and her capacity to care for herself began to decline. Chris’s mother was living with the Kelleys last year when things began to take a turn for the worse.

On Halloween night 2015, Kelley called the police when her mother grew angry and she needed outside assistance. Kelley explained to the officer that she was seeking guardianship through the court system to take control of her mother’s health and make decisions on her behalf to ensure her wellness and safety. The process of getting legal guardianship takes time and also requires documentation to get it approved and can be especially stressful for families.

Kelley’s mother had always been an independent woman and giving away her rights to her daughter was a difficult decision that no one took lightly. After that Halloween night, the Lake Forest officer explained to Kelley she was absolutely doing the right thing to protect her mother. The officer said to call anytime she needed aid and having police reports indicating her mother needed assistance would improve her legal case. The true kindness of the officers began to shine through and Kelley quickly saw how often the police department can play instrumental role of social worker and advocate for others.

Between Halloween and February 2016, the Lake Forest Police and Fire Departments came to the Kelley’s home six more times. Each time Kelley said the officers were kind, patient, and especially clever in their approach with her mother and very understanding to everyone in their family. “They were so experienced and easygoing with my mother, it was obvious to see they handled these situations with expert training and the utmost dignity frequently,” she explains.

Today, Kelley’s mother is residing in a nursing facility getting the care she needs thanks to the officers aiding their family with the documentation and support that helped them receive guardianship. “My mother is happy and thriving in her nursing home,” Kelley says. “I feel very blessed and fortunate to have had the positive and helpful experience we had with every police officer and firefighter that helped us along the way. Their kindness and professionalism was amazing.”