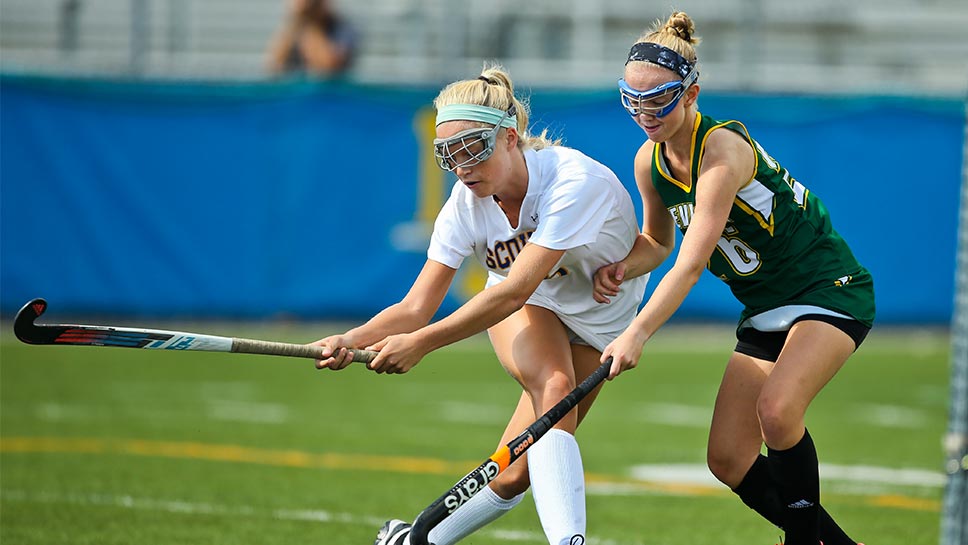 Grace Payne is set to take her playmaking skills to the bright lights of the Big Apple. PHOTOGRAPHY BY JOEL LERNER

Grace Payne was in the city of Chicago, miles and miles away from her hometown of Lake Forest on a balmy fall day in September. Chicago … Lake Forest. Jolly Green Giant … ant. Sturdy … charming. But Payne, a Lake Forest High School senior field hockey player, was in her element in the 60614 ZIP code, comfortable and captivated, before the start of a road game against Francis W. Parker School.

The nearby skyscrapers did not intimidate her. The soundtrack of the broad-shouldered city—honking cars, the screeches of a truck’s bad brakes, somebody whistling to hail a cab—agreed with her.

“We were walking together before the game, and Grace said to me, ‘Wouldn’t it be cool to live in a big city like this?’” Scouts senior Faith Fietsam, a midfielder like Payne, recalls. “Grace likes the lifestyle of a big city, the atmosphere, everything about it.”

“It’s a beautiful campus, and I love the city,” says the 5-foot-9 Payne, a third-year varsity player who verbally committed to the Ivy League school last April. “The coaches care deeply about the program. I rode on the team bus with the players. The bus took us to the fields, about 100 blocks from the school. There’s something about a big city, all of the restaurants, all of the things you can do in one. It would be great to work in one someday.”

Her current job for the Scouts’ field hockey team, starting right midfielder, does not pay her much ($0 to be exact). Payne’s versatility made life difficult for her boss, LFHS coach Melanie Walsh, at the beginning of the season. Where to put Payne? In the midfield? At forward? On defense? She is capable of playing anywhere. Capable of playing quite well anywhere.

“Grace found a home at right midfield, where she’s making a daily impact,” Walsh says, adding Payne’s reliable presence in the midfield hadn’t atrophied her offensive or her defensive abilities for a 13-1 squad (11-0 against Illinois foes) ranked 17th in the country by an online preps site in late September.

“She is great,” the coach continues, “at stuffing opponents along the sideline and then feeding the ball to the forwards. Grace is also an important part of our offensive penalty-corner unit.”

From her slot on that corps, Payne struck for a team-high four goals and distributed a pair of assists in a stretch of three games from Sept. 21-26. The Scouts won 7-0, won 6-0, won 9-0. Relentlessness, cubed.

Payne got her start in field hockey at New Vision Athletics in Lake Bluff. She was a third-grader, maybe a fourth-grader. The sport’s competitiveness attracted her to it, immediately. Her vision and aggressiveness, her feel for the game, her adept passes put her on a path to club field hockey. Windy City Field Hockey fielded club teams with Payne on them.

“Those wins and how we did in St. Louis [co-champions of the Gateway Tournament] were big confidence boosts for us,” Payne, also an avid runner and a squash and intramural basketball enthusiast, says. “Our offense is strong, really strong, and we’re doing well in transition.”

Payne and Fietsam are intramural basketball teammates. Payne is a three-point specialist, Fietsam a point guard. Payne is also the team’s self-appointed general manager/coach/marketing specialist/trainer/motivator. The team plays once a week and practices on Sundays during the winter season.

“It’s a casual league, but don’t tell that to Grace,” Fietsam says. “She might take basketball as seriously as she takes field hockey, and that’s saying something. She runs our team. She brings intensity to the court at all times.”

There’s a hilarious side to Payne, too. Quiet at first to those who encounter her for the first time, she eventually reveals a sense of humor that is part sarcastic, part deadpan, part delightful. Get to know her for a few minutes and prepare to laugh.

“Grace doesn’t take everything seriously, and that’s one of her best qualities,” Fietsam says. “She loves to joke around, keep things light. Honestly, she is one of the funniest people I know.”

Looking for Payne, but you can’t find her? She’s either on a road or in a forest preserve. Running. It’s her favorite pastime, and it’s her favorite activity to pass the time.

“Running to Grace is like yoga to others; it’s where she finds her zen,” Walsh says. “If she weren’t so good at field hockey, she would certainly be an accomplished runner. She has been known to play an entire field hockey game and then go and win a local 5K.”