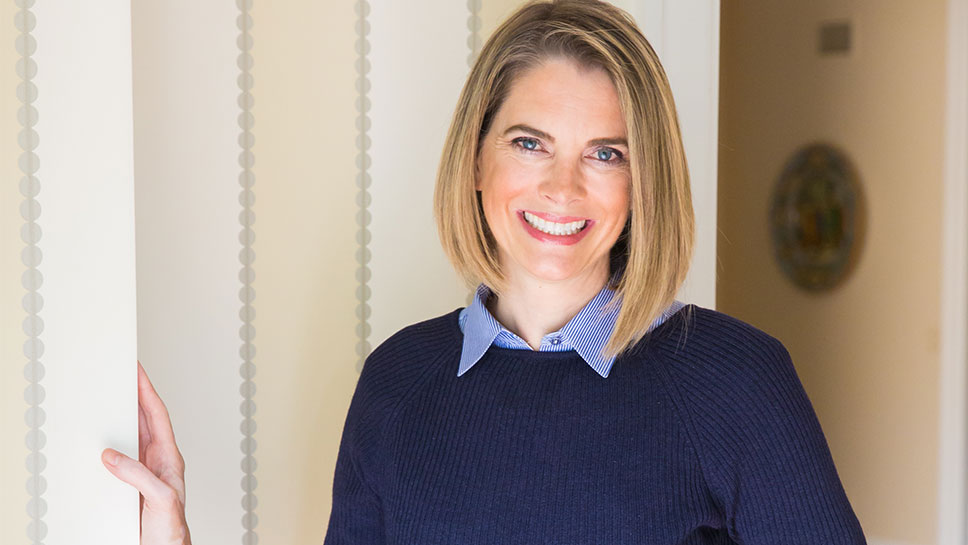 With her fourth book debuting this month, it‚Äôs hard to believe that Lake Forest resident and author Katherine Reay began her writing career just seven years ago. It was then that she encountered an injury that would take her out of her normal routine and leave her with some unprecedented time on her hands. ‚ÄúUsually when people go to the hospital, most people bring them flowers. My friends brought me books,‚ÄĚ she says. Three days and 31 novels later, Reay had the idea for Dear Mr. Knightley, a story of a 23-year-old woman finding her own voice in the world after spending her life hiding behind her favorite literary characters.

Though Reay didn‚Äôt have any formal training in creative writing‚ÄĒshe has a Master‚Äôs Degree in marketing from Northwestern that she applied to brand management work and nonprofit development‚ÄĒshe had one of the most required assets for penning a novel: perseverance. ‚ÄúThe great thing about your first novel is that it might never even get off of your computer, but you have nothing to lose,‚ÄĚ she says. ‚ÄúThere‚Äôs no one telling you it can be done, but there‚Äôs also no one telling you it can‚Äôt‚ÄĒso I just kept writing.‚ÄĚ

It‚Äôs a good thing she did. After 18 months, she published Dear Mr. Knightley‚ÄĒand that was just the beginning. One year later, she released Lizzy and Jane, a story about two sisters brought closer together by life changes. A year after that came The Bront√ę Plot, a novel about a bookseller whose secret is unearthed for the better. That novel-a-year momentum continues this month with A Portrait of Emily Price, a story of a young art restorer who is bound by her efforts to have total dominion over her daily life‚ÄĒuntil, that is, she falls in love.

‚ÄúEmily Price lives in a way where she thinks she can control all of the details of her life, but attraction isn‚Äôt controllable,‚ÄĚ says Reay, who introduces her protagonist to an Italian man and takes them both back to his home country. ‚ÄúWhat Emily finds in interacting with his family and in being immersed in a culture that has taken her so far outside of her own, is that the sweet life‚ÄĒla dolce vita‚ÄĒcan only be found when you really and truly let go,‚ÄĚ says Reay.

The idea for the story ‚ÄĒ and for every one of Reay‚Äôs books ‚ÄĒ came from a question the author has. This one was sparked by a scene in C.S. Lewis‚Äôs Till We Have Faces, in which a queen writes a letter to the gods demanding they answer her. ‚ÄúIn the end, the gods are like, ‚ÄėReally? Who are you to come to us?‚Äô It made me think about what it takes for us to realize we can‚Äôt hold on to things so tightly,‚ÄĚ says Reay. ‚ÄúI began to wonder what it would look like for a modern woman to be enticed to let go of that control.‚ÄĚ

The setting for the story, one built upon a lifestyle of leisure, is only likely to encourage that process. ‚ÄúI chose Italy on purpose because even if you‚Äôve never been, you can look at pictures and experience the fairytale world that it is,‚ÄĚ notes Reay. ‚ÄúIt was important for me to take Emily Price, someone who lived by certain rules of confinement, and throw her into somewhere rich with wine, bread, and history.‚ÄĚ

As someone who has lived in 14 cities‚ÄĒincluding two international destinations‚ÄĒReay would know better than anyone the significance of place. ‚ÄúIt‚Äôs phenomenally important to me,‚ÄĚ says Reay, who has lived in all of the cities that serve as settings for her previous books: Seattle (Lizzy and Jane), London (The Bront√ę Plot), and, of course, Chicago (Dear Mr. Knightley). ‚ÄúPlace defines us in many ways‚ÄĒit‚Äôs really its own character.‚ÄĚ

In addition to instilling in the reader a strong sense of place, there‚Äôs another commonality among all of Reay‚Äôs works: their ability to capture a character‚Äôs turning point. ‚ÄúThey‚Äôre not necessarily coming of age stories because I believe you can have a turning point not only at any point in your life, but repeatedly in your life,‚ÄĚ she explains. It‚Äôs for that very reason she chose to feature both a 25-year-old heroine and an 85-year-old heroine in The Bront√ę Plot. ‚ÄúThings happen to these women, and to all of my characters, and I think things happen to us to make us look at the way we live and to change it.‚ÄĚ

Reay credits her 2009 injury as one of her life‚Äôs greatest turning points. ‚ÄúIt changed everything,‚ÄĚ she says. And it wasn‚Äôt the last one she encountered. ‚ÄúI just went through one last week, and I haven‚Äôt fully processed it. My eldest went to college,‚ÄĚ she says. ‚ÄúThat‚Äôs the thing about turning points‚ÄĒthey just keep happening.‚ÄĚ