Every July, more than 300 boats leave the Chicago Harbor Lighthouse and set off on a race to Mackinac Island. Known as “The Mac,” the 333-mile-course is the oldest and longest freshwater sailing race in the world, drawing participants and spectators from around the country.

The race began in 1898 with only five boats, and wasn’t held again until 1904. Due to weather and war, the race was suspended several times in the early 1900s, but has run consecutively since 1921, gaining a large following and prestigious reputation.

This year, when the race kicks off on July 23, Jim Murray from Lake Bluff and Nick Van Antwerp from Lake Forest will be in the running, as well as many others from the area.

Murray grew up sailing on Lake St. Clair in Grosse Pointe, going on to sail competitively in high school and college and coach junior sailors.

“Sailing was always about friends and family growing up,” Murray says. “I got my start in sailing camp, and we always heard about the Mackinac race. It was like a right of passage.” 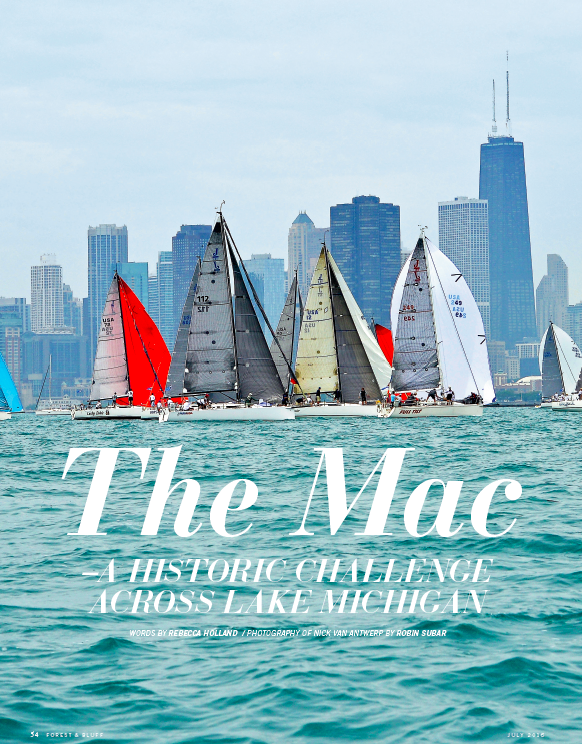 “We haven’t taken first in our section yet, but there’s always hope,” he says. So far, he’s finished in the top three in his fleet a number of times, as well as the top 20 overall.

Van Antwerp also began racing at a young age with his family and through sailing school.

“I have to thank my father for my love of sailing. He had me out on boats and small catamarans when I was as young as four,” Van Antwerp says. “He also competed in the Bayview to Mackinac for years, and I used to spend time sitting on the Mackinac hotel porches waiting for his boat to come in. I’ve really been around this race for my entire life.”

Though he’d been involved since he was a kid, it was when he turned 12 and started traveling around the Midwest doing regattas and one-man boat races that he became more serious about the sport. Soon, he was offered a coaching position with the Lake Forest Park District, and later a head instructor position with the Judd Goldman Adaptive Sailing Foundation. 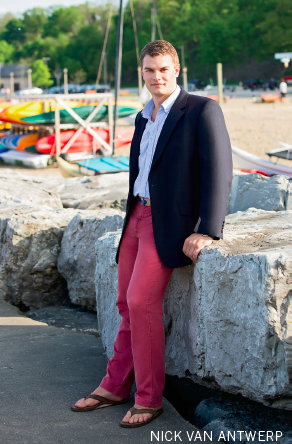 “It’s been really rewarding to teach and give back to the sport,” he says. This will be Van Antwerp’s third year in the Chicago to Mackinac race in the “Das Boot” Beneteau 40.7 Dusable harbor, owned by Jay and Cindy Muller. In 2015, he placed 4th overall, and was named “Boat of the Year.”

Because of its long length, unpredictable weather, and the ever-changing winds on Lake Michigan, the race is challenging even for the most seasoned sailor.

“It’s a logistical challenge,” Murray says. “It’s essentially a two-to-four day camping trip for eight people, and you have to be prepared for all weather from 100 degrees and blazing sun, to 50 degrees and raining. You’re sailing 24 hours a day, so you have to have your meals, fresh water, safety equipment, and materials to fix the boat, and to make sure your crew is the right combo of people who can play all of the roles.”

Murray says most sailors—and there are about 2,500 of them in the more than 350 boats entered—started preparing last fall.

Van Antwerp agreed that weather plays a large role in how challenging the race will be.

“We have three different models we look at showing how the weather systems will affect conditions on the lake throughout the course of the race,” Van Antwerp adds. “The forecasts are never right, but as conditions change throughout the race we can develop a strong understanding of what to expect, which influences how we cross the lake and other tactical sections,” he says.

His boat holds about 12 people, all of whom have sailed before.

“I’m fortunate enough to be on a boat where everyone has experience, so we can talk through changes in the weather, rotate shifts at night, and keep each other motivated,” he says. “Staying alert can be a challenge, but as long as you’re smart at keeping on top of wind shifts and other boats in the fleet, you’ll be ok.”

While both sailors would ultimately like to win the race, they’re mostly excited to see what happens this year and spend some time on the water.

“It’s all about friends and family,” Murray says. “My team includes people from Lake Bluff and Lake Forest, people from Chicago, people from California, and from the East Coast. It’s truly a unique thing to be able to come together and have this every summer right here on the lake. It’s something for kids in the area to get into at a young age, and teaches sportsmanship, dealing with nature, respect for the lake, and respect for what mother nature can do if you’re not prepared or respectful. There are a lot of lessons you can learn from The Mac.”