One morning Lake Forest’s Cassie Mancuso Carver was sitting in bed, getting ready to start her day.

With her iPhone in hand, two young girls milling around, and her responsibilities at her family’s car dealership looming, she began to text her husband Dan with a list of to-dos: Pick up the dry cleaning, drop off my prescriptions, and remember that our daughter’s birthday party is next week.

“At that moment, I felt guilty that I was constantly nagging my husband,” Carver says with a laugh. “And I remember thinking, wouldn’t it be great if I could just put these reminders in his phone calendar and stop harping about what I need him to do?”

Carver soon reached out to her close friend and fellow Lake Forest High School classmate Brette Borow to see if this idea had any merit.

“I thought Cassie was definitely on to something,” says Borow, who had been kicking around other ideas for a startup business with Carver for years. “We all know about Google Calendar and use it, but no one would ever send a calendar invite with a reminder to pick up milk on the way home from work,” she says.

“And while text messages sometimes work, people often get them and forget that they are there.” 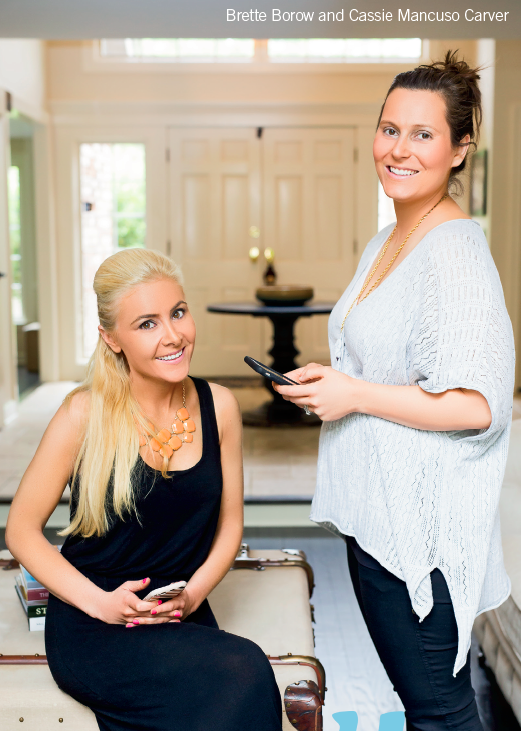 So Carver, Borow, and Carver’s husband Dan set out to create a social calendar app that allows one to create, share, and add reminders into someone else’s phone calendar. Using the simplicity of a text message and the power of a smart phone calendar, the Carvers and Borow launched “Harp,” under the umbrella company Hello Girls Media. At the app’s most basic level, a user sends a Harp. The recipient then accepts the Harp and the to-do (or reminder) is dropped into his or her phone calendar.

“It’s been such a learning experience,” explains Carver, who says she and Borow have worked nearly every evening for the last 18 months to build Harp. “We had to sketch out every wire frame before we could turn it over to our programmer.”

While the team considered hundreds of names for the app—everything from “nag” to “pigeon”—they landed on “Harp” because it was frequently the word Carver used to describe the behavior she wanted to replace with this app. Borow oversaw Harp’s graphic design elements and Carver says she did so with a perfectionist’s eye.

“Harp would not look as good had Brette not been involved,” Carver says. “She thought through everything, even making sure the app could be navigated with one hand.” Borow also initiated the grassroots marketing campaign for Harp—primarily geared towards mothers, which includes Facebook, Twitter, and Instagram accounts. “We had 7,000 followers on Instagram before we ever unveiled what we were launching,” Borow says.

While Carver considers herself—a working mom—the primary target for Harp, their research has shown many other users who benefit from this technology. “I’m an event planner for my family’s company and I’ve been able to send out a single Harp and remind our clients and vendors when the event is,” she says. “We’ve also heard from personal trainers that they like to send Harps to remind their clients about their daily fitness or dietary tasks.”

“My brother who is in his 20s,” chimes in Borow, “who I never thought would use this app, planned a golf outing with his friends using Harp. This is definitely a multi-user app.”

With Harp now available for download from the Apple App Store, Carver and Borow are anxious to get Lake Forest and Lake Bluff harping. “We’re excited to be able to roll this out in our community first. This app will actually make life easier for our users.”