Deborah Rine has led such an interesting life that when she retired from her position as teacher and chairman of the French department at York High School, her friends encouraged her to write a memoir.

Rine had been married to a Frenchman and lived in Europe for 12 years, moving from Paris to Milan, Verona, and Brussels.

“I became French for a bit, and I became Italian for a bit,” she says.

She wasn’t so sure about a memoir, but she did have an interest in food writing, so she took a writing workshop at Northwestern University. There, she met a few successful mystery writers who would change her life. Since that workshop, Rine has written three successful novels for her Banner Bluff mystery series, as well as another novel based on a true event. 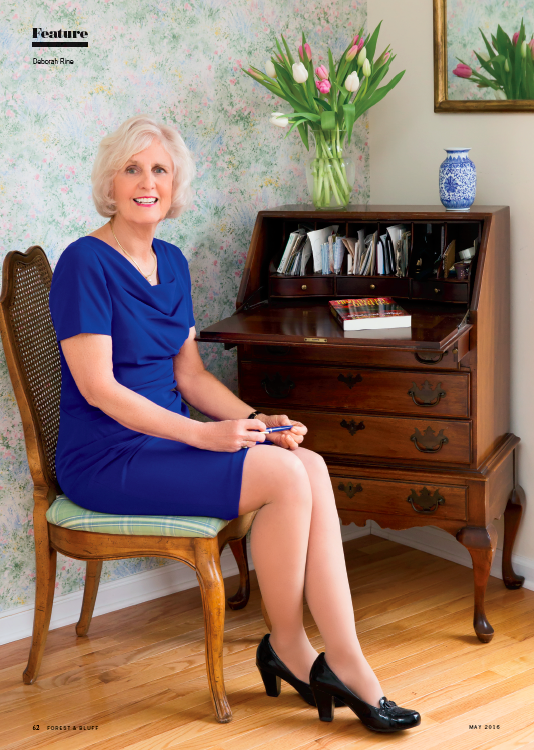 The mystery authors Rine met blew her mind with their writing process, but it was one she soon adopted as her own.

“They would just take a theme or an era, then get a couple of characters, and then they would let the book go and they had no clue where it would end up,” she says. “This seemed crazy to me, as I always assumed you would want a nice outline and to have it all planned out.”

Shortly after the workshop, Rine’s adult children were going through some health and personal issues, and she found herself up all night worrying about them.

“I thought, I need to think about something else, so I started writing,” she says.

She took another class online through ed2go.com, and through it wrote a story that consumed her time and thoughts. The story was published in the Chicago Tribune, and when the class ended, she decided to turn it into a book, The Lake.

“I had written this little piece about walking to the lake from downtown Lake Bluff, because I would park my car there and walk my two dogs down to the beach for the sunrise. Then I thought, what if I added a dead body?”

And there she had the prologue for The Lake, which became popular among Lake Bluff residents for its familiar setting.

The town in the book is called Banner Bluff, but Rine says it’s “essentially Lake Bluff with a bunch of Lake Forest moved in.”

“A lot takes place in the gardens,” Rine says. “I tried to give an insular English village feel to it, even though it is near Chicago. I wanted it to feel like everything is occurring in this little town.”

Readers will also recognize Silo restaurant as the fictional Grainery, and Bluffington’s as Churchill’s.

“Lake Michigan itself is almost personified as his own character, this scary guy, but I don’t want to give too much away for those who haven’t read the books,” Rine says.

She lets the plot take a life of its own as she writes, but the characters are developed beforehand. Rine uses a questionnaire to answer every possible question about her characters, from how they look to their political views.

“This helps them become a real person in my mind,” she says. “I have the characters then I write. Lo and behold I had no clue who the murderer was in The Lake, I just started writing and the story unfolded before me.”

Rine is working on a fourth Banner Bluff novel about police brutality, for which she interviewed a Chicago detective and Karl Walldorf, Deputy Chief of Police in Lake Forest. She says interviews and research are crucial to her writing process. For Francesca, a journalist and the main character in her series, she interviewed a local reporter to learn about the daily tasks of the job. She also gets inspiration from the New York Times Science section, which is how she heard about face blindness, the brain disorder that became the title of her second book.

Aside from mysteries, Rine is thinking about starting a book about her life in Italy.

“We lived in the mountains in a small town before moving to Verona, and I think that would be a good book, but I have a hard time writing about myself. I think if I romanticize it I would be able to do it,” she says.

This book, like her others, will most likely be self-published, a process Rine says was surprisingly enjoyable.

“I had no credentials, so I researched how I could publish myself, and in the end used CreateSpace and it was such a wonderful process, truly great,” she says.

One thing she doesn’t do herself though is edit.

“I think having an editor is very important. Mine is based in Chicago, and she edited The Lake twice and made it so much stronger,” she says.

Though she had a happy and successful 25-year career as a teacher, Rine has found a new kind of joy in writing, and doesn’t have any plans to stop.

“It’s a way to escape my everyday life and I absolutely love it.”