A couple of Brianna Sturkey’s emotions collided after a basketball game in February. Happiness bumped into sadness, a sudden foe. Her eyes welled up.

Laughter returned, squeezing tears out of her welled-up eyes. Sturkey, an Oak Park native, had a good reason to be thrilled and a good reason to be sad on February 11. LFA had defeated visiting Fenwick, a school located in Oak Park, 56-43. Thrilled. The game was Sturkey’s final game in a Caxys hoops uniform. Sad. In a span of four seconds at the end of the game, the 5-foot-8 Sturkey, wearing a No. 22 home jersey, scored the last point in the Caxys’ stellar season (22-1) and heard the final buzzer of her prep basketball career.

Each quarter in a game lasts eight minutes. Sturkey played all 32 minutes against the Friars, totaling eight points, 12 rebounds and three steals. Lots of running and passing and jumping and defending. No sitting.

“It’s been the most amazing experience, this season, playing for this team,” Sturkey says, dabbing damp eyes with her index fingers. “We had such good chemistry. We communicated well. Our friendship, the friendships all of us developed—that helped, too.”

They call Sturkey “Breezy” at school. She came up with the nickname, magic-markering it on campaign posters to catch her peers’ attention in hallways before an election at the academy.

Everybody calls her “Breezy.” Some of her closest friends might have forgotten her first name. It’s an ideal moniker for her, fitting. “Breezy.” A breeze refreshes people, especially on muggy days. Sturkey delights people, every day, weather never a threat to snap that sunny streak. The captain of the basketball team is a prefect (one of only 12 at LFA, all seniors), the Black Student Union president, the organizer of LFA’s first girls basketball fall league entry, a poet, a future lawyer, a fervent Drake fan, and the single-season record holder at LFA for number of combined selfies taken (way too many to count) after basketball games.

“Breezy has such a presence at our school,” senior Ryan Williams, of Long Grove, says from her seat in the bleachers at halftime of the Fenwick-LFA game. “She works hard, she has great style, and everybody respects her.”

Chicagoan Kendall Logan, also a senior at LFA, sat just to the left of Williams. Logan, smiling and leaning forward in the ready-to-pounce position, could not wait to speak and get effusive about Sturkey as soon as Williams completed a thought.

“Great leader, a go-getter, smart and funny and a good dancer,” Logan says. “She read a poem once, in front of a lot of people. It was captivating. It made people cry.” 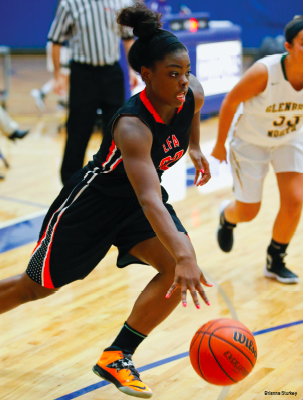 The second half of the Fenwick-LFA game started, LFA up 21-20. Williams and Logan had returned to serving as vocal LFA girls basketball fans in the gym. Sturkey scored four points, two field goals, in a 48-second span. Fans shouted Sturkey’s nickname after each bucket. Loud rounds of “Breezy!” produced currents of gusts. Sturkey then scored four of her eight points and collected six of her 12 rebounds in the fourth quarter, including a critical board on a missed LFA free throw with 51 seconds left, LFA owning a 50-43 lead. She also deflected a Fenwick pass near Fenwick’s bench and secured a steal that led to a layup by Caxys senior forward Theresa “Tessy” Onwuka. She. Was. Everywhere. Sturkey should have been exhausted in the final eight minutes, thoroughly spent, looking for the closest comfy chair or an available oxygen tank. Her energy, remarkably, resembled first quarter energy, fresh and potent.

“Brianna brought her vocal leadership to each game,” LFA coach Chris Tennyson says of the all-tournament pick at the Culver (Indiana) Invitational in January and the Caxys’ leading scorer (20 points) in a 50-43 defeat of Maine East in November.

“Late in the game [vs. Fenwick], you should have seen her, heard her, in our huddle. She willed her teammates to keep fighting, to keep playing hard, to grab every loose ball for the rest of the game. She told them, ‘Come on, finish, let’s finish this!’”

LFA outscored Fenwick 23-8 in the final quarter, 17-2 in the final 3:36. Quite a finish. Sturkey had spoken. Teammates had listened, had acted. Leadership at work.

“Great captain, very vocal,” Caxys junior guard and Lincolnshire resident Aleeya Sawyer said of Sturkey, also a four-year Full Package Athletics AAU player. “She pushed us in practice to make us better players, never stopped pushing us, never stopped encouraging us. Great friend, too, with so much energy, passion, and determination. Everybody feels comfortable around her.”

Sturkey’s varsity letter this winter was her ninth. She now has four letters in basketball, four in volleyball, one in soccer (freshman year). She is thinking seriously about going out for LFA’s soccer team again this spring, her AAU hoops career having reached the 0:00 mark of the fourth quarter last fall.

What about the fall of 2016? High on the list of colleges she is considering is Barnard College, a liberal arts school in New York City. Constitutional law intrigues her. Her basketball future is like a jump ball and a cumulonimbus: up in the air.

Sturkey had more pressing needs, at ground level, after a basketball game. She had things to do after a milestone event, her last basketball game in LFA’s main gym. She had an iPhone in hand, victorious and happy teammates milling around her, and a smile to capture. Her smile. She took a selfie. More would follow. (Too many to count).